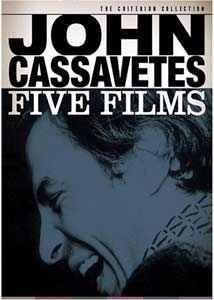 William Speruzzi at [This Savage Art] asked folks to cite examples of the best commentary or special features on a DVD. I confess that I almost never rewatch the film with the director’s commentary, and only occasionally bother to watch the special features, including interviews with the director or actors. Why? Because they are usually boring, or I don’t learn enough new information to make watching them worth my time.

Obviously a company like Criterion excels at creating interesting commentaries and special features as part of the packaging of their DVDs, and even publishes accompanying pamphlets for certain films. The added features on Shadows in their boxed set of five films by John Cassavetes, for instance, has a fascinating interview with Lelia Goldoni on what it was like to participate in this now legendary indie film as an eighteen-old acting student. She talks about Cassavetes’ method, which was to have the actors hang out with each other outside of the production in order to develop their characters and relationships. Goldoni claims that Cassavetes was busy experimenting with various improvisational techniques, but that no one (herself included) really had a sense of what he was doing at the time. She talks about one of the key scenes, the bedroom scene, and her negative reaction after making love with Tony. Goldoni talks about the scene being scripted, and suggests: “I wouldn’t have the nerve to say that line. The line being: ‘I never thought it could be so awful.’ Because it was in the ’50s and there was an entire romantic thing about – which I thought was captured brilliantly – about your first experience at sexual encounters. You know, it was supposed to be wonderful. I, as a human being, would not have dared to say anything except for the convention. And that line was not the convention, and John wrote that. And I think that was John’s brilliance.” She discusses the inspirational aspect of Cassavetes, saying he kicked people’s butts to make films their own way. Goldoni concludes, “He was always in his films, in every one of his films, he was looking for how to express the truth – the truth of this moment, and the truth of this character, and the truth of this circumstance. And, man you can’t do better than that.”

I also liked the interview included on Thumbsucker (2005), even though it ultimately goes on much too long. Mike Mills, the director, and the novelist Walter Kirn obviously have incredible admiration for each other. Mills reads a long passage from the novel about Justin’s obsession with his mother, Audrey, and his oedipal rivalry. Mills comments: “I love the grandiosity of that in little Justin – you know what I mean? – so needing to be her peer, her suitor, her everyman. And it’s so hugely ambitious for a kid, and also terribly tragic when the kid drops the kidness and tries to become the adult to the mom. That was the part I could so grab on to. Kirn responds by discussing the autobiographical elements of his book. Mills talks about the difficulties he had raising financing for the film because of the “repulsion” factor. Kirn adds that it was no different in trying to get the book published. He explains: “But this [thumb sucking] was a genuinely uncomfortable behavior. And I think it immediately brings out that side of everyone they want to hide, which is the soft , gooey, dependent, unformed self.” In trying to obtain financing, Mills indicates that once the “soft” element in the film would be raised, it became a signal to him that the meeting was over.” Mills also has some interesting things to say about improvisational techniques he used in the film, some of which obviously mirror what Goldoni describes Cassavetes as doing. For instance Mills had the main actors live together as an actual family for several days in preparation for their roles.

I’d say the best interview on a DVD that comes to mind, however, is by the Turkish director of Distant (2004), Nuri Bilge Ceylan, who also did the more recent Climates (2006). Strongly influenced by Tarkovsky, Ceylan makes a positive case for low-budget filmmaking. He talks about the benefits of utilizing a small crew and non-professional actors. He also offers great insights into casting, dialogue, and performance. Ceylan indicates, for instance, that he chose the lead actor, even though this person gave the worst performance in the casting session. The casting session involved line readings of dialogue, but because Ceylan’s film involved very little dialogue, he decided to go with his intuition. He shot a great deal of the film in his apartment. Ceylan also discusses how he was able to utilize what was available around him: the weather (snow), the huge shipwreck in the harbor, and the city of Istanbul itself. Ceylan provides a rationale for using long takes and for a more minimal style. He says he loves to edit, and talks about getting up in the middle of the night and editing. Ceylan discusses how the actual film changed from the script, and how he came to eliminate things that he felt were not necessary to the story. Most insightful are Ceylan’s insights into the characters. He discusses the implications of key scenes, such as when Mahmut falsely accuses Yusuf of stealing, and then hides the evidence to the contrary. In terms of Mahmut’s former wife, Ceylan explains that Mahmut goes to see her before she leaves for Canada with her new husband because he’s hoping for a miracle. Ceylan talks about people doing things even when they know they’re not really viable. In other words, even if Mahmut and his wife were to reconcile, their relationship still wouldn’t work. Ceylan observes that people don’t really change, which becomes a rationale for the kind of naturalism he employs.