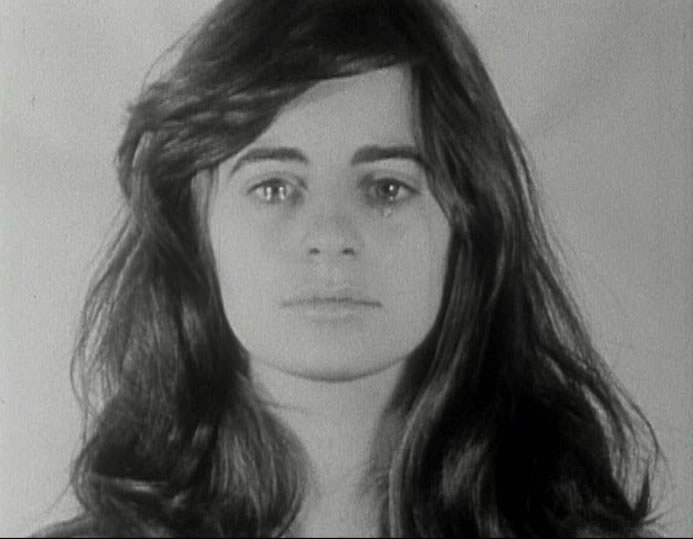 This is my contribution to the Close-Up Blog-a-thon at The House Next Door.

In thinking of the closeup, I almost invariably gravitate to the films of Andy Warhol, largely because so many of his films privilege this particular framing. In his extended screen test, Henry Geldzahler (1964), the then twenty-nine-year-old Metropolitan Museum of Art curator, loses his protracted battle with the camera, eventually regressing to an infantile state. In Screen Test #1 (1965), one of the longer sound portraits, Philip Fagan, Warhol’s inhibited lover at the time, lacks the verbal dexterity to counter the clever spider’s web of words that Ronald Tavel weaves to ensnare him, so that Fagan’s only response is to refuse to respond and stare silently off-screen, turning the screen test into a strange form of psychodrama. In Blow Job (1964), a film which Oggs Cruz has already written about, Warhol registers the activity of oral sex by concentrating the camera’s attention solely on a reaction shot of the recipient’s face.

The closeup is often used for dramatic emphasis in narrative films, but Warhol made entire films using only this shot, often as a form of portraiture. In the various Warhol Screen Tests – he created 472 of them – the issue of time becomes a crucial and distinguishing element. How can the subject fill up time? For Warhol, time is essentially determined by the length of the film that is running through the camera, even though he ultimately projects it at slower speed. Of the ones I’ve seen, by far the most fascinating screen test is the four-minute silent one of Ann Buchanan (1964), which appears as part of Warhol’s The Thirteen Most Beautiful Women (1964-65) and Four of Andy Warhol’s Most Beautiful Women (1964-69).

The screen test begins with a closeup shot of Ann Buchanan, framed from the neck up. As we view the image, the lighting is distinctly flat. Her left cheek is a bit hotter than the one on the right, which makes her left eye more prominent. We see two points of light reflected in her left eye, while a single point appears in her right one. Her hair is straggly; her facial expression is remarkably neutral. Buchanan stares directly at us, almost as if transfixed by the camera. Buchanan’s eyelids quiver ever so slightly at one point, but she doesn’t blink. Her throat and cheek also move imperceptibly, but Buchanan never loses her concentration. A pinpoint of light appears on the inside part of her right eye, which later flutters again. A minute-and-a-half into the film, what appears to be a tear forms at the bottom of Buchanan’s right eye. A half-minute afterwards, a tear falls from it, followed by another one ten seconds later. Her throat moves, and a third tear rolls down the right side of her cheek. Meanwhile Buchanan’s left eye fills with tears as well, as another from her right eye rolls down her face. Nearly three minutes into the film, a new tear drips from her chin, followed by a tear from her left eye, which continues for the rest of the film.

The fact that Ann Buchanan cries during her screen test is mind boggling. The shock of this is compounded by the utter discrepancy between her deadpan expression and the tears that emanate from her eyes. How in the world has she managed to cry? Do her tears stem from the tension of trying not to blink, or do they derive from her being able to employ the technique of emotional recall? Buchanan was not a Method actor, however, so her screen test confounds our expectations. Callie Angell indicates that this was Warhol’s favorite screen test, and it’s easy to see why. Buchanan’s rigid stare and wide eyes are very doll-like in appearance, so that her spontaneous gesture of crying while being filmed reminds us of one of those crying dolls, inanimate, yet capable of such an uncanny display of emotion.