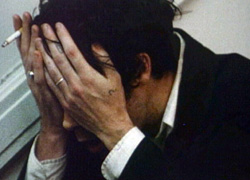 Of the spate of recent mumblecore films, Ronald Bronstein’s debut feature Frownland is easily the most idiosyncratic and distinctive. The film received the Gotham Award for “Best Film Not Playing at a Theater Near You” and Bronstein was nominated for the Independent Spirit “Someone to Watch” Award. In addition, Chrissie Iles, the film and video curator at the Whitney Museum, also listed Frownland as one of her “Top Ten Films of the Year” in Artforum.

Frownland – the title comes from a Captain Beefheart song – is a character study of a highly dysfunctional, mentally challenged young man named Keith Sontag (Dore Mann), who just happens to resemble David Berkowitz, the notorious Son of Sam. Keith is more or less harmless rather than a serial killer, but, with his overly baggy clothes, grimacing facial tics, and obsessive-compulsive gestures, he nevertheless seems to be a walking time bomb, incredibly frustrated by his inability to connect with those around him.

Bronstein originally wrote a script for the film, but because Frownland is more character-based than plotted, things totally changed once he cast the actors. In an interview with Filmmaker magazine, Bronstein explains:

“In general, I’m pretty disenchanted with the standard industry approach to scriptwriting. I mean, I do find it helpful in terms of mapping out a structure and overarching themes and stuff, but the act of sitting alone in your room and trying to nail on the page the sort of ineffable dimensionality of human inflection just seems so completely backwards to me. ’Cause as soon as you try and pass that set text through an actor’s mouth, ugh, it’s like knocking a square peg through a round hole. All the immediacy and emotionality gets lost. Like a dubbed voice. Maybe this approach can work if you’re making something grounded in heavy plotting, where the characters and the dialogue exist chiefly to move the narrative from A to B. But I want to work in the reverse. I want the progression of the story to form organically out of the characters themselves.”

Frownland begins with Keith watching a monster flick on TV as he eats eggs and popcorn, but he’s interrupted by a call on the intercom from a female comic-artist named Laura (Mary Wall), who cries uncontrollably. She turns out to be equally as dysfunctional. As the two drive through New York streets in her car, Keith tries to find something to say, but he’s incapable of even constructing a coherent sentence. When Laura temporarily disappears from the car, the camera moves closer as Keith contorts his eyes and groans like a monster, eventually causing tears to well up in his eyes – a shot that’s pretty emblematic of the whole movie.

The scenes with Laura, which take up over fifteen minutes, would seem to suggest that this romantic plotline will be at the heart of Keith’s story, but this proves not to be the case. Laura, in fact, largely disappears from the film. Only much later do we learn that Keith believes that Laura, a self-mutilator, has taken money he left on the table. After we are forced to view Keith’s hairy naked body as he takes a shower, Frownland veers in unexpected directions from the initial setup. The film seems to be organized into episodic sequences involving: Laura, Keith’s door-to-door job hawking coupons for charity, encounters with his boss, his tribulations with his arrogant musician roommate, and his attempts to inflict himself on a male friend named Sandy. One structural oddity is the fact that, at roughly sixty-five minutes, the film inexplicably detours into following Charles for an extended period.

Whereas Blake in Gus Van Sant’s Last Days reduces dialogue to incoherent muttering and silence, Keith’s ramblings do not result in any form of mutual exchange either. In fact, Keith’s dialogue only has a corrosive effect on others. Keith’s line, “If I was you and some troll just came out of the water,” causes his boss to speed off in his van. Keith has the ability to drive anyone nuts, which becomes part of the sheer pain and exasperation of watching Frownland. Perhaps this accounts for the fact that female viewers of all ages score the film less than 2 on a 10-point scale on the IMDB Web site. For whatever reason, men seem more tolerant, probably because Frownland is so uncompromising in its portrayal of a truly grotesque male character.

During Keith’s door-to-door solicitation, we learn some background information, namely, that his estranged father died of a heart attack six years earlier. In a later psychiatric session Keith discusses an incident in which his mother ripped off his father’s toupee, exposing his baldness. He remarks, “And it was almost like she had pulled the electrical cord out of its socket.” The offscreen therapist probes, “How did that make you feel?” Keith answers, “Betrayal?” The therapist asks, “Who betrayed you?” After a long pause, Keith responds, “Her?” As Keith continues to ponder this, Bronstein abruptly cuts away. While this scene can be seen as an attempt to provide psychological motivation for Keith’s behavior, he’s actually so damaged that this memory of his father’s emasculation falls hopelessly short of explaining his character.

When an elderly woman informs Keith that solicitation isn’t allowed in the housing complex and neighbors are watching, Keith’s solution is for her to invite him inside to use her bathroom. She naturally refuses, but we later watch as he pees by the dumpster. Keith has other inappropriate responses. He tries to get a woman who works at an Internet café to read a fabricated message from Con Edison to a friend for his birthday. As it turns out, Keith’s musician roommate, Charles (Paul Grimstad), hasn’t been paying the electric bills, which serves as one of the film’s few plot elements.

Keith calls a “friend” named Sandy (David Sandholm) twice, but Sandy refuses to pick up the phone. It’s clear from both his reactions and Keith’s messages on his answering machine that Sandy finds Keith completely annoying. Keith nevertheless shows up at Sandy’s apartment after he returns from work, presumably to retrieve his lost work badge. Sandy displays very little tolerance for Keith, who asks to use his bathroom and watch an old movie, but then falls asleep on the couch. Sandy fast forwards the videotape and indicates it’s time for Keith to leave.

Keith finally finds the nerve to confront Charles about his not paying the electric bill. He begins with another self-deprecating monologue, “I know what I must be like. One of those ghostly-like servants in the turn-of-the century manor houses in England, where you never really know they’re around until you hear a spoon drop.” Charles responds, “Who drops the spoon? You dropped the spoon. You’re a servant? I’m confused.” When Keith tries to explain the anxiety the unpaid bill causes him, Charles answers, “Has it ever occurred to you that your ridiculous, disjointed, splutterings might inspire me to want to malign you? That I might deliberately not pay the bill just to punish you for your pathologies?”

We see another side of Charles in the digressive sequence where he applies for a job at restaurant, takes an LSAT test presumably in hopes of training others for the exam, and ends up getting his Walkman stolen by a fellow test-taker. Already without electricity and faced with being evicted from the apartment, Charles now demands to talk about the situation with Keith, who no longer wants to discuss it. The power dynamic has been reversed temporarily, but Charles still insults Keith about his “mangled syntax” and refers to him as “a burbling troll in his underwear.” As they argue, Charles suddenly punches Keith in the mouth.

The violence escalates when Keith manages to find his way into Sandy’s building. Completely agitated, Keith insists on explaining himself, but the two get into a tussle, leaving Keith with a bloody ear. Keith shows up at a party, where, to the sounds of “Jailhouse Rock,” a couple of drunks place a lampshade on his head, like a dunce, causing him to freak out. Keith stumbles through the halls. He presses his hands to his face and cries and groans loudly, snot dripping from his nose. The next morning, Keith appears on the graffiti-covered roof. He eventually urinates in the corner, as credits appear over the scene, which ends with a closeup shot of Keith’s head buried in his hands as sunlight from behind nearly obliterates his image.

Shot on 16mm, Frownland has the overall feel and texture of an underground comic – dark and extremely hellish. Although Keith Sontag is a very sad and pathetic character, Bronstein never manipulates us into feeling sympathy for him or his plight. Rather he lets us see Keith for exactly who he is – the good and the bad – which is ultimately the film’s strength. There’s nothing endearing about Keith. Unlike its mainstream equivalents – Rain Man or even Good Will Hunting, for that matter – Frownland never resorts to sugar-coated humanism.

Bronstein favors long takes, lots of closeups, frontal shots, and grainy images. There’s a grittiness and deliberate artlessness to the film that reminds me of the DIY look and style of early punk films. While Frownland may not be for everyone, there’s something very authentic and genuine about Bronstein’s portrait of an inveterate loser. Rather than a calling card, the film really feels like a highly eccentric labor of love. As Bronstein describes it: “More succinctly, Frownland is my own small contribution to the sinking barge of the 16mm indie model; both an overripe tomato lobbed with spazmo inaccuracy at the spotless surface of the silver screen and a mad valentine to the craggy tradition of unadulterated cheapo-independent expression.”