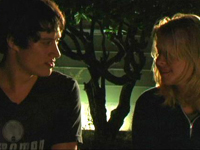 I’ve already written about Aaron Katz’s terrific second feature, Quiet City (2007) previously, but I finally had a chance to catch up with his debut effort, Dance Party, USA (2006). Both films have been released recently on DVD in a two-disc set from indie distributor, Benten Films, confirming my belief that the most intriguing films out there aren’t necessarily playing at the local multiplex.

The two films – Quiet City and Dance Party, USA – are remarkably different in tone. Although Quiet City is a potentially uplifting love story, Dance Party, USA is an incredibly dark and disturbing portrait of teenage relationships. Dance Party, USA begins with the aftermath of a beer bash, as Jessica walks through a house the next morning, which is followed by large credits set against patriotic red, white, and blue backgrounds. Following moving car shots of Portland, two teenagers converse while riding on light rail transit. Gus (Cole Pennsinger) tells his friend Bill (Ryan White) a crude misogynous story about one of his sexual escapades, but also reveals that the girl, named Kate, is only fourteen. This freaks out Bill, who dismisses the story as bullshit. The conversation switches to the upcoming Fourth of July party. When Bill asks Gus about his ex-girlfriend Christie and it becomes apparent that he’s interested in her, Gus encourages Bill to have sex with her.

Meanwhile, as they walk in an industrial section of town, Christie (Sarah Bing) discusses Gus with her friend Jessica (Anna Cavan), who hasn’t had much luck lately on the romantic front. Christie confides her ambivalent and conflicted feelings about the relationship with Gus. As rap music plays, the camera moves through the party, before settling on a phallic beer bottle resting on Gus’s crotch, as he converses with Bill, who’s waiting for Christie to show up. It takes a matter of minutes for Gus to get a bored female party-goer into bed. Her post-coital dissatisfaction is obvious not only from her body language, but from the brick pillar that divides the frame in two, as she lies in bed, while Gus gets dressed.

A guy hits on Jessica at the party with a promise of killer weed, but she’s not interested, especially once she figures out that he’s the older brother of someone she knew in fourth grade. Katz has a great ear for naturalistic dialogue:

GUS: Where you been?
GUY: I’ve been all over. I was driving all over the place.
GUS: Cool.
GUY: You ever been in Nebraska?
GUS: No.
GUY: Well, you know how like when you think of Nebraska, you can’t really think of anything that’s there?
GUS: Yeah.
GUY: Well, there’s actually a lot of stuff there.
GUS: That’s pretty cool. So what are you doing here?
GUY: I don’t know. I guess . . . I don’t really know what I’m doing, and I ran out of money, and I’m back. I had this job in Texas, but . . . fuck . . . I didn’t want to stay there.

What’s also interesting in this scene is Gus’s sustained reaction to this drunken guy. He’s become so inured to such conversations that the fissures in his concentration are only revealed in the darting movements of his eyes.

A huge fireworks display is depicted without the accompanying explosions, creating a disjunction between sound and image. There’s another shot later on of Jessica playing a record with head phones on, which creates a similar effect. It’s the equivalent of the gaps that exist in the conversations between these young kids – almost as if most of the meaning of what’s transpiring is occurring entirely in the silent spaces between their words rather than in the words themselves. In a sense, even more so than Quiet City, Dance Party, USA is nearly all subtext, as if these kids’ whole world – adolescence itself – is somehow rendered as a completely impenetrable experience, even to those who are experiencing it.

Gus meets Jessica outside the party, as she sits there bored and brooding while waiting for Christie, who has taken up with Bill. Following the stiff formal introduction of these two “friends of a friend” – who know each other only indirectly, but nevertheless intimately – Gus tries to explain his bad reputation. Jessica, however, beats him to the punch by prematurely divulging that she’s not going to sleep with him and declaring that she thinks he’s an asshole. Gus tries to start over again, and in doing so, ends up making a shocking personal revelation regarding the fourteen-year-old girl.

It’s the same story he’s told Bill earlier, but this time Gus actually confesses the truth about what really happened that night – it’s not a pretty picture. “I do bad things a lot of times,” he tells her, “but I’m not a bad person.” Throughout his long and painful monologue, Jessica, bathed in warm golden back light, doesn’t really say anything. Afterwards she ignites a couple of sparklers, which we watch in close-up until they fizzle out. Finally, she asks, “Do you want to go somewhere?” The two drive through downtown Portland at night. The shots of city – the lights emit a reddish cast as if we’ve suddenly entered the underworld, followed by more fluorescent blues – manage to provide the intrusions of reality into this otherwise encapsulated teenage world. The sequence culminates in a scene where Jessica simply asks Gus whether he’s cold, before she silently drops him off at his house.

Gus manages to track down the victim of his story, Kate. Gus has earlier told Jessica how the passage of time had nearly wiped the incident out of his memory, but he’s clearly trying to gauge what impact it has had on the younger teen. When Gus turns up at her door, Kate doesn’t appear to recognize him. She asks, “Have we met before?” He responds, “Kind of. I mean, we met at a party. Like a year ago.” A bit unsure what to do, she invites him inside to watch TV and drink coke. Gus queries her about having a boyfriend as well as the length of the relationship. He asks casually, “What happened with that?” Kate, however, is not very forthcoming. After a long pause, Gus asks, “So has anything like really bad ever happened to you?” She answers, “Like what?” Kate merely shrugs and asks him the same question, suggesting that she has already repressed the whole incident (at what future psychological cost?), and, consequently, Gus doesn’t bring it up.

As Gus and Bill sit on the couch drinking beers, Bill invites Gus to join him and Christie at the amusement park later on. He also refers to Jessica as a bitch. Gus complains about women always wanting him to stimulate them physically, when, as he puts it, “I’m like, suck my dick. I just want you to suck my dick.” He also finds the word “slut” to be a turn on, and refers to photography and painting and studying insects as “fag shit.” Gus, however, suddenly asks, Why not?” He then confesses that he really likes Jessica, not for her body, but for herself. Bill, however, offers Gus advice, “If there’s one thing I’ve learned, it’s not to feel bad about anything.” He continues, “Don’t do it to yourself.” Gus responds, “Thanks.” As hardcore music continues to play in the background, Gus asks Bill for a hug, but it clearly makes Bill feel uncomfortable.

Gus and Jessica later meet up at the amusement park, and decide to get their picture taken together in a photo booth. After they make goofy faces and run out of money, the two turn and kiss twice before they leave the booth, and the film abruptly ends.

Dance Party, USA captures the emotional turbulence of what it feels like to be a teenager. In particular, it’s about the pressures of being male with its exaggerated emphasis on getting drunk, sexual conquest, and subservience to peer-group pressures. Although Dance Party, USA, in contrast to Quiet City, stays much closer to the written script, Katz has a knack for obtaining incredibly naturalistic performances that actually have real depth. He also has an economical way of staging scenes by employing long takes and minimal cutting that caters to the performers. Aaron Katz is clearly at the forefront of filmmakers associated with mumblecore.

I’m not convinced that Dance Party, USA deserves to be seen as “a kind of correction to Larry Clark’s KIDS,” as Karina Longworth has written, or that the film is “a story of bad behavior leading to redemption.” If so, I don’t understand the scene toward the end between Gus and Bill, or even the previous one with Kate. I think Gus definitely has been affected by his interaction with Jessica. At least he can admit his feelings for her beyond lust for her physical body, but confession alone is rarely enough to change a person’s behavior. To his credit, Katz is careful to leave this as an open-ended question, which is part of the authenticity and honesty of the film. Dance Party, USA remains a sobering portrait of a rather confused male teenager, who — at least until now — has used his good looks as a weapon against young women.