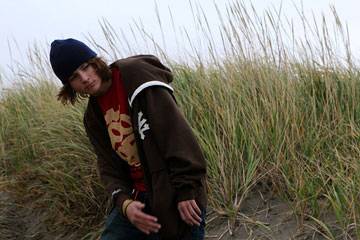 Paranoid Park (2007) confirms Gus Van Sant’s status as one of the top American independent filmmakers working today. If his last two films, Elephant (2003) and Last Days (2005) were loosely based on already well-known figures and events – the Columbine shootings and the demise of rock star Kurt Cobain – Van Sant’s superb new film, adapted from Blake Nelson’s novel, focuses on a shy and disaffected teenage skateboarder named Alex (Gabe Nevins), who accidentally kills a security guard while hitching trains one night. In this latest film, Van Sant moves even further away from the dialogue-driven script – he completed the adaptation in a mere two days – toward a film that relies heavily on visual storytelling

Paranoid Park is more boldly free-form than Van Sant’s previous trilogy, but it borrows some of the same strategies for a somewhat different effect. Van Sant still plays with temporality by scrambling time as the film shifts the chronology of events to explore the guilt-ridden psyche of its teenage protagonist, who’s clearly gotten himself into a situation that’s way over his head. Alex is barely able to negotiate everyday life, never mind a crisis of this magnitude. Van Sant creates an impressionistic look at this introverted kid’s world – his relationships with his estranged parents, friends, and his jealous and demanding girlfriend, Jennifer (Taylor Momsen). Van Sant speeds up and slows down time, giving equal weight to long lyrical passages of kids skateboarding. Sounds of birds once again suggest the inner turmoil of Alex, connecting him to the troubled shooter of the same name in Elephant.

On a surface level, Van Sant shows the same fascination with the world of teenage outcasts as Larry Clark. Whereas Clark’s Wassup Rockers (2005) and his subsequent photo show of its lead actor, Jonathan Velasquez, felt voyeuristic and ultimately exploitative, Van Sant avoids fixating on teenage bodies in the same leering way. Instead, cinematographer Christopher Doyle and Rain Kathy Li’s camera focuses more heavily on the light that illuminates the protagonist’s angelic face, linking Alex – with his eyes raised toward heaven – more directly to the history of painting.

Paranoid Park opens with a shot of the massive steel bridge straddling the river in the city of Portland, as we watch cars in fast motion traverse the expanse, with the city in the background and gray clouds in the sky. Alex writes the words “Paranoid Park” in a lined notebook. We see him walking in a field with a dog. As Van Sant does so often in Elephant, Van Sant follows his subject from behind as Alex strides toward the beach, where he sits on a bench with his notebook and reflects. In voiceover, he describes Jared (Jake Miller) and the skateboard haven known as Paranoid Park. Alex doesn’t believe he’s ready to go there, but Jared convinces him otherwise. About a month later, Alex gets called out of class at school.

Once inside the main office, Detective Richard Lu (Daniel Liu) questions Alex about his whereabouts on a particular September evening. Alex is more articulate in describing the contents of a Subway sandwich than in providing other details of the night in question. Lu’s line of questioning suggest a shared rapport with the teenager, when, in fact, there’s an enormous chasm between them. In a subsequent scene, Lu calls in the various skateboarders. He suggests that they can call him “Rich,” and discusses his desire to make contact with this particular “community” – a concept that completely eludes these kids. When Alex later wonders about Lu’s suspicions, one of his friends remarks that cops are paid “the same as a janitor.”

In the first scene with Lu, we learn certain background information about Alex, namely, that his parents are in the process of getting a divorce, as well as the fact that he has a younger brother and girlfriend. When Lu indicates that a skateboarder from Paranoid Park was most likely at the scene of a horrific crime, the camera slowly moves in closer toward Alex, eventually framing the blank reaction on his face, as we hear the sound of a loud scream from offscreen.

After Alex returns to class in a slow-motion tracking shot down the school hallway, we see documentary shots of skateboarders and other people, whose faces have been blacked out. Jared announces his desire to go to Paranoid Park the next day. Alex also explains the issues with his cheerleader girlfriend. He claims that Jennifer is nice, but she’s still a virgin. Alex knows that sooner of later they’ll have sex and things will get a lot more complicated as a result.

Alex borrows his mother’s car and heads to Paranoid Park, where he meets a hardcore skateboarder named Scratch (Scott Patrick Green). Alex thinks the park is great, but he also worries about his parents and the stress their impending divorce is having on his younger brother. He also wishes that he and Jennifer had more in common, but he really wants to ride the freight trains with the other train hoppers from Paranoid Park.

We learn from a female neighbor friend named Macy (Lauren McKinney) that Alex has broken up with Jennifer. Macy also suspects that he harbors a dark secret. She flat out asks him, “Did something happen to you?” Alex does end up acknowledging that something has happened. It is only at the end of the film that we realize that Macy is the one who has convinced Alex to write down the events that he narrates as a way of purging himself of what’s weighing on him. She tells him, “Write it to me.” He does, but burns the evidence.

The weight of the crime causes Alex to lie on a number of occasions – to Detective Lu, his mother, Jared, and even to Macy, who seems to know when he’s being untruthful. There’s a scene where Alex’s mother asks him about a phone call to his Uncle Tommy, with whom his father is staying. When it turns out that the call was made at 4:35 in the morning, Alex suggests that he was “half-asleep” or “maybe even sleepwalking.” It’s the kind of preposterous lie that teenagers continually tell, as if most adults are completely stupid. His mother doesn’t call him on it, which makes its own sad statement.

Alex says of the crime, “I tried to put that part out of my mind,” but Lu’s pictures of the victim’s severed body bring it vividly back to mind. We see Scratch and Alex hopping the freight train and the security guard running after them. After the gruesome accident occurs, Van Sant cuts from the victim’s face as he crawls toward them, to two different shots of Alex, to Detective Lu, then back to the security guard and Alex’s startled reaction. As Alex flees the train yard afterwards, we hear his confused internal monologue – the rationalizations and jumble of thoughts flooding his mind. In the film’s most spectacular visual sequence, Alex showers in an attempt to wash away the crime. We see his lowered face as water spills over his hair. As a result of Van Sant changing the camera speed, narrowing the shutter angle, and moving a hand-held 2K light, the scene darkens and brightens. Images of birds decorate the wallpaper in the background as Alex slowly slides down in the shower and the sounds of birds keep getting louder.

After ice skating one afternoon, Jennifer seduces Alex. He lies there impassively in a lovemaking scene that’s rendered as light reflected off her blond hair and his deadpan face. Afterwards, she suggests getting more condoms. At school the next day, she asks whether Alex has gotten them. When he indicates that it was her idea, this elicits an angry response, but Alex appeases her by suggesting that he thought they would get them together. Alex later breaks up with Jennifer in a scene in which the diegetic sound of their argument has been replaced by music.

Paranoid Park explores the strange confusion of being a teenager, compounded by the burden of guilt and hidden secrets. Van Sant’s elliptical storytelling reflects Alex’s fragmentary attempts to tell his story, while managing somehow to render this transitional period of being a teenager with more depth and complexity than would seem possible. The scrambled subjective narration and use of repetition prevents Paranoid Park from ever becoming predictable, while the broad range of tonal shifts – the abstract interplay between image and sound – show Van Sant to be able to make a great work with an economy of means.