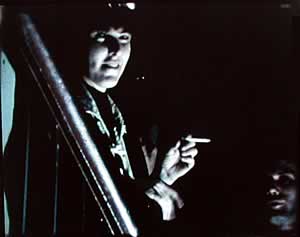 Andy Warhol’s first deliberate effort to make a commercial sexploitation film was I, a Man (1967–68 ), which was supposed to feature both Nico and Jim Morrison, but Morrison backed out at the last minute – possibly because Warhol wanted him to have sexual intercourse on-screen – and he was replaced by an actor friend of Morrison’s named Tom Baker. In I, a Man, Baker attempts to have sex with eight different women: Cynthia May, Stephanie Graves, Ingrid Superstar, Nico, Ultra Violet, Ivy Nicholson, Valerie Solanas, and Bettina Coffin. The scenes are separated by shots of Baker reflectively smoking a cigarette. It’s a very simple premise – one that certainly fits the notion of a sexploitation film by presenting an opportunity to display a number of different female bodies, while also being a test of Baker’s seductive power. In terms of the casting, I, a Man featured Warhol superstars: Nico, Ingrid Superstar, and Ultra Violet. In addition, Valerie Solanas, the lesbian author of the SCUM Manifesto (Society for Cutting Up Men) and Ivy Nicholson would add unpredictable elements to the film.

Who knew at the time that the inclusion of Valerie Solanas would guarantee that I, a Man would become an important historical document whatever anyone thought about the artistic merits of the film. Yet, as strange as it might seem within the context of a sexploitation film, the scene with Valerie, in many ways, epitomizes the real power and energy of Warhol’s cinema. Valerie’s hatred of men stemmed from her own personal history. She reportedly was sexually abused by her father as a child and resorted to prostitution as an economic means of survival. In the SCUM Manifesto, Valerie writes with a venomous rage, mixed with trenchant humor, about the inherent inferiority of the male species: “Eaten up with guilt, shame, fears and insecurities and obtaining, if he’s lucky, a barely perceptible physical feeling, the male is, nonetheless, obsessed with screwing; he’ll swim through a river of snot, wade nostril-deep through a mile of vomit, if he thinks there’ll be a friendly pussy awaiting him.” She talks about females “who’d sink a shiv into a man’s chest or ram an ice pick up his asshole as soon as look at him.”

Set on a stairwell, rather than an apartment, which suggests a potential site of sexual molestation, Tom Baker’s attempt to coerce Valerie to let him into her apartment bristles with subtext. Even if you didn’t know anything about Valerie, there’s a creepy quality to the scene, but, Warhol, of course, is interested in creating a situation that has built-in dramatic conflict. The two characters have opposite goals. Baker wants to get inside her apartment, whereas Valerie wants to prevent this at all cost. Given her personal background and his ostensible desire to screw, it has the potential to develop into a combustible situation. That’s why its recreation in Mary Harron’s film can never measure up to what Warhol managed to stage in I, a Man.

The scene begins with a pulsating stairwell that been lit to look like a German Expressionist set, with the verticals suggesting prison bars. Valerie comes up the stairs followed by Tom Baker. When they arrive at the door to her apartment, he asks, “You got the key?” Valerie searches her pockets, has second thoughts, and suddenly asks, “Hey, what am I doing up here with a finko like you?” A strobe cut restages it on the landing just below, but we hear Valerie repeat the last part of her dialogue. She then says, “I can’t figure it out – you’re a fink.” This makes even Baker laugh. He responds, “You don’t even know me.” They talk about the business of his squishy ass. He wants to go inside, but Valerie indicates that her roommate is there, and adds that she’s squishier than him. Valerie asks him, “But what else have you got?” He says, “I don’t talk about those things, baby.” Baker suggests that they can explore each others bodies, but Valerie quite rightly insists, “Look, I’ve got the upper hand. We must not forget that.”

Valerie squeezes Baker’s ass once more in an attempt to get rid of him, but he trails after her. At the landing, Tom says, “Listen, Valerie, just stop here for a second. I just want to see something.” They disappear into the shadows, but he has his hands on her. Valerie, says, “Hey, come on, man. I mean, like this is rape. I don’t dig that shit.” Baker takes off his shirt, while Valerie struggles, “Hey, come on, man! Goddamn it. Hey, come on! What’s this shit, man?” She protests, “My roommate’s very jealous. She’s possessive. She’s very possessive.” After strobe cuts, the two smoke cigarettes in a different location on the stairs. Valerie claims not to like his “tits” and they argue about them. Baker finally says, “What is it in your head that you don’t dig about men?”

In the strobe cuts that follow, Valerie waves off the camera and then later smiles for a very brief visible moment – a decidedly mixed message that matches the bizarre dynamics of the situation. Alluding to the SCUM Manifesto, Baker asks her, “What is it some philosophy you have in life that you don’t . . . ?” Valerie, however, turns the tables on him by inquiring whether Baker likes men. He indicates that he hasn’t “balled” men since he was young. He argues that, in pursuing women, he’s following his “instincts.” Valerie responds that she’s also following hers, and asks pointedly, “Why should my standards be lower than yours?”

Since they both share the same instincts, Baker suggests a possible threesome with her roommate, but Valerie indicates that her roommate wouldn’t like him. After strobe cuts, the camera moves closer to Valerie, as her face, especially her eyes, moves in and out of the light. Baker tries to block her way, but Valerie claims not to live there and, in a stunning gender reversal, says, “I want to go home. I want to beat my meat.” She pushes past him, and, in another shot, Valerie asks the crew whether she should go all the way down the stairs, as she heads out and the scene ends.

Baker claims that he never felt that Valerie posed a personal threat. Instead, he says, “I found her intelligent, funny, almost charming, and very, very frightened.” Baker never explains why Valerie seemed frightened, but it’s clear that he has been given enough information about Valerie to push the scene to the limits – the hint of possible rape, the allusions to the SCUM Manifesto and the biological basis for her sexual politics – in order to make Valerie feel threatened and uncomfortable. Warhol listed Valerie in the published credits under a silly pseudonym “Valeria Solanis.” Although Valerie reportedly was humiliated when she saw the actual film, she nevertheless wrote Warhol a postcard dated August 25, 1967: “Dear Andy, I’ve been noticing gross misspellings of my name in articles & reviews connected with ‘I, A Man.’ Please note correct spelling.” In the true Warholian fashion, even Valerie appreciated the value of publicity.

Note: For a detailed analysis of I, a Man and other Warhol films, please see my book The Black Hole of the Camera: The Films of Andy Warhol (University of California Press, 2012).