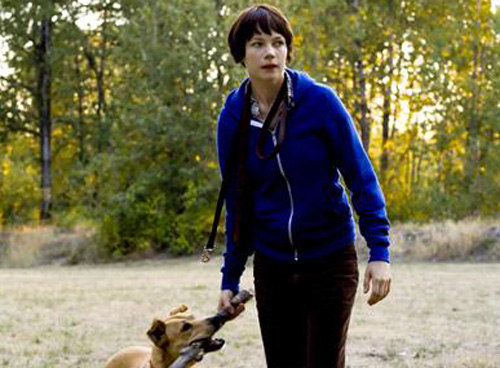 Kelly Reichardt’s first feature River of Grass (1994), a regionally inflected, feminist riff on genre set in the area between Miami and the Everglades, drew critical attention within independent film circles, but received only limited theatrical distribution. It would be over ten years before Reichardt’s collaboration with writer Jon Raymond provided the unexpected spark that reignited her career. Made on a micro-budget of $30,000 and adapted from Raymond’s short story (itself the result of a collaboration with photographer Justine Kurland), Old Joy (2006) managed to become a major critical hit and to gross ten times its production costs. Reichardt and Raymond’s latest effort, Wendy and Lucy (2008), produced for a mere $300,000, not only fulfills the promise of Kelly Reichardt’s earlier work, but catapults her squarely into the forefront of major independent directors.

Both of the Jon Raymond short stories on which Reichardt’s last two films are based have just been published in a collection entitled Livability (Bloomsbury, 2009), allowing viewers an opportunity to understand the nexus between word and image in Reichardt’s work. The story of a camping trip between two old friends whose lives have taken different trajectories, Old Joy deals with the impermanence of relationships in a culture of accelerated technological change. Raymond’s “Old Joy” turns out to be even more understated than the film, which includes an important added element, namely, that Mark (Daniel London) is married and soon to become a father. After Kurt (Will Oldham) and Mark get lost while searching for a remote hot spring, the pair end up camping overnight in a garbage-strewn area in the forest. As the two shoot empty tin cans with a BB gun in front of a golden bonfire, Kurt, stoned and drunk, discusses his theory of a falling tear-shaped universe. Afterwards, Kurt has a sudden emotional outburst. He cries that he misses Mark, and insists that something has come between them. Mark impassively denies this, but, of course, it’s something he can’t admit to himself.

Old Joy is completely understated – it relies almost wholly on subtext for its narrative tension. Dialogue is kept to a minimum. We get mobile shots of Portland to the sound of Air America on the radio, purely cinematic sequences of the majestic countryside accompanied by music, and extended treks through the dense woods with Mark’s playful dog. Reichardt’s long takes include everything that would be cut out of most other films in the service of succinct storytelling. When Mark drives to Kurt’s house, for instance, we watch him park, get out of his car, and walk all the way to Kurt’s front door. In one memorable scene, the camera frames Kurt smoking a joint inside the car, as we view Mark studying a map through the windshield. Mark heads away from the car down the road. His cell phone rings. We watch him jog back to retrieve it, and then amble back away from the car. We can’t hear Mark’s conversation with his wife as he paces, but we can sense her irritation, as can Kurt, no matter how dulled his senses have become.

In Old Joy, Lucy (the director’s dog) inserts herself into the film, enough to become a character by often seeming to favor Kurt over Mark. In Reichardt’s latest effort, Lucy has finagled her way into a title role. Reichardt indicated in the recent issue of Film Comment that what she most admires about Raymond’s stories is that “he writes these really interior kinds of characters, and then the challenge for me is just figuring out how to physicalize that in turning things over into a script.” Ironically, “Train Choir,” the source for Wendy and Lucy, provides more motivation for the protagonist Wendy (Michelle Williams) than the film, even though Raymond’s writing style is rather spare. Ray Carver used to talk about life in terms of people having either good luck or bad luck, and his characters were left to grapple with whatever life dealt them. Wendy is down on her luck. While it’s not made explicit in the film what has left her in such a dire predicament – she elicits no sympathy when she phones her sister – Wendy’s hell-bent on making it to Alaska, where she believes she’ll be able to earn enough money to start her life over.

En route from Indiana to Alaska, Wendy’s car breaks down in a small town in Oregon. With a tight budget and food running out for her pooch, Wendy attempts to pilfer a couple of cans of Iams from a nearby grocery store. On her way out the door, she gets stopped by a young worker named Andy (played by John Robinson, the protagonist of Gus Van Sant’s Elephant, no less). With a silver cross around his neck, he’s strictly Old Testament, insisting on retribution for her petty crime. After vacillating, the spineless boss lets Andy call the cops, and Wendy is hauled away, fingerprinted and booked by an inept officer, before she’s forced to pay a fine she can’t afford. By the time Wendy returns to the grocery hours later, her beloved Lucy has disappeared from the parking lot where she was left tied up outside the store. Wendy’s search for her missing dog, which takes up most of the film, might be exasperating if Reichardt weren’t such a masterful visual stylist and storyteller. In one of the film’s most striking scenes, Wendy visits the local pound. Reichardt’s camera tracks past the various cages of dogs, suggesting the inside of a prison.

The film involves a series of episodic incidents, mostly with the people Wendy happens upon in the vicinity where her car has stalled. In Wendy’s initial jaunt into the woods, Lucy leads her to a group of young street people, one of whom pets the dog, while another, appropriately named Icky (Will Oldham), spins a rambling tale about driving an expensive bulldozer off a cliff in Alaska. There’s the security guard (Walter Dalton), who tries to befriend Wendy by allowing her to use his cell phone. As becomes painfully clear as Wendy tries to navigate her desperate situation, you can’t really exist in this society without an address or digital means of communication. In one of the film’s only redemptive gestures, the kindly guard later tries to help Wendy by stuffing crumpled bills into her hand – it turns out to be six dollars.

There are also those only too willing to take advantage of people less fortunate or down on their luck, such as the indifferent cops or the auto mechanic (Will Patton), who cons Wendy into junking her car for the reduced towing charge. And when Wendy’s forced to spend the night in the park, she has the misfortune of running into a scary derelict (Larry Fessenden), who rifles through her stuff while Reichardt’s camera focuses mostly on her face. Wendy breaks down afterward in the bathroom of the gas station. By the end, she’s so beaten down by events that she can no longer even think straight. The film seems to suggest that it’s bad luck that leads to reckless decisions – not the other way around.

It’s impossible to talk about Wendy and Lucy without mentioning Michelle Williams, who has short-cropped dark hair and wears the same plaid shirt, pedal pushers, blue hoodie, and distressed sneakers during the entire film. Williams’s understated performance is nothing short of extraordinary. Critics often talk about acting as if it were somehow unrelated to the script. If Wendy’s motivations are not always delineated, this gives a truly gifted performer such as Williams even more creative room to maneuver. In her interactions with others, she has a tendency to turn completely away from them (and the camera) as an innately defensive response. It’s only with Lucy that Wendy is able to exude any warmth or emotional spark.

Reichardt has always gravitated to those vulnerable characters who seem to exist on society’s margins. Wendy and Lucy, in fact, begins and ends in a train yard, as if deliberately conjuring up the past – the mythic figure of the hobo – in order to suggest that the Great Depression of the 1930s is back again. As such, the film can be read as a searing indictment of the Bush economic legacy. Reichardt creates rectangles within rectangles, evoking all the ways Wendy manages to get herself boxed in. There’s one shot in particular, where the camera follows Wendy as she walks in front of a brown wall. She turns the corner, but the camera stops abruptly, dividing the space of the frame in half. Reichardt relies on a symphony of train sounds and Wendy’s humming rather than music to create emotional resonance. With its muted colors, rusted metal, and grey skies, Wendy and Lucy manages to create an overall sense of melancholy that seems to reflect the protagonist’s psyche.