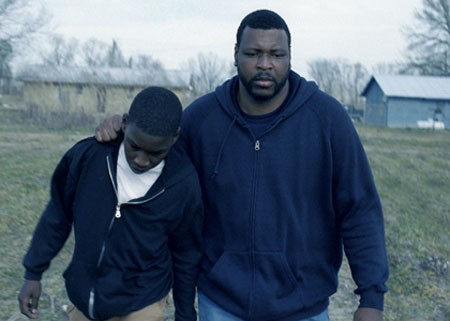 Lance Hammer’s first feature Ballast (2008), set in the Mississippi Delta, generated a great deal of critical buzz when it screened at the 2008 Sundance Film Festival and Hammer wound up winning the Best Director award. Like the very best and most distinctive independent films being made today, Ballast represents a hard-sell in a glutted theatrical marketplace. Hammer initially accepted a distribution deal with IFC, but backed out of it and has been self-distributing the film. It’s not for me to judge whether this represents a wise decision or pure folly, but I respect Hammer’s integrity and his desire not to give his film away for nothing, especially after all the labor and effort it took to create such an extraordinary work.

After immersing himself in the setting for the film and doing extensive interviews with local residents, Hammer abandoned his initial screenplay because he it felt it was “too overt” or “untruthful.” He eventually wrote a new version, which was based on a series of photographs and very extensive notes, over the course of two years. Hammer then cast African-Americans who lived there to play the parts rather than professional actors. In an interview in Cineaste, he explains: “In a Bressonian fashion, I was interested in the physical characteristics of people, and physical comportment, the way a body moves in space, the way emotions animate the physical vessel you carry around on earth. You can tell the temperament of a person almost right away.”

Hammer did three months of scene-by-scene rehearsals on location. He would videotape the rehearsals, and what transpired in them would be transcribed into a “running draft.” The nonprofessional performers were never given the screenplay in order to memorize lines, although they sometimes were shown a scripted scene in order to grasp the basic idea of it. Hammer, who also cites Mike Leigh as a major influence, contends: “Because they [the actors] already had a general understanding of what was going on outside the scene at hand, but a foggy understanding of the scene itself, it would force them to respond as themselves. That was fun: It yielded many wonderful, realistic moments.”

Ballast indeed owes much to realism, yet the film manages to go far beyond its conventions by being austere, boldly visual, richly poetic, and rigorously formal. The film employs elliptical jump cuts and a documentary-like mobile camera that often pans rather than cuts between characters. Like Antonio Campos’s Afterschool, Ballast centers on a depressed protagonist, relies on only diegetic sound and avoids non-diegetic music. Cinematographer Lol Crowley (who won the Best Cinematography award at Sundance) does wonders with natural lighting, which gives the entire film a cool bluish cast.

Ballast begins with a hand-held shot of a twelve-year-old African-American boy named James (JimMyron Ross), who trudges through winter fields as we hear and see geese flying in the distance. He suddenly runs toward them, causing thousands to take flight, filling the sky and causing a tremendous cacophony of agitated noise. A white neighbor, John, turns up at a modest house, where Lawrence (Michael J. Smith Sr.) sits on the couch in a stupor. John puts his hand to his nose indicating a terrible stench. He goes inside and discovers the dead body of Darius, Lawrence’s twin brother, who has taken his own life. As John talks to the police on the phone, Lawrence leaves, and moments later we hear a gunshot, and emergency medics arrive and rush him to the hospital.

Ballast cuts between plot threads involving Lawrence recuperating at home and James, but Hammer withholds the type of exposition that’s usually provided in a film’s first-act setup, and only gradually parcels it out through the course of the film. He also forces us to focus our attention on discrete individual shots – small observed details – rather than on what would be considered more central in most other narratives. When John invites Lawrence to dinner, the camera follows Lawrence from behind in two separate shots as he approaches the house in a lumbering gait. There’s a brief shot of the two men as they eat in silence. We then watch as Lawrence walks down the stairs and passes his own dog Juneau (whom John has been boarding) on the way to the bathroom, without any sort of recognition. Lawrence’s despondency over the loss of his brother has deadened him to everything else around him. The point is reinforced by an extended shot of Lawrence washing his hands after using the toilet.

James steals Lawrence’s gun, then turns it on him. To our surprise, the giant hulk of a man reacts with total passivity. As James threatens Lawrence, their ensuing dialogue is remarkably banal. Unlike most movie dialogue, it feels invented on the spot.

James then demands to see Lawrence’s gunshot wounds. In a striking juxtaposition, Hammer cuts from Lawrence’s gruesome scars to the boy being cuddled by his single-mother, Marlee (Tarra Riggs), as he watches television. When James goes to bed, he tells his mom he needs twenty dollars to play basketball at the community center. She doesn’t have it.

James pays a return visit to Lawrence, who addresses the boy by name this time, and robs the older man at gunpoint. When Lawrence doesn’t have enough cash, James forces him next door to get Darius’s money. James asks Lawrence details about Darius’s suicide, which leads to a startling revelation. James turns out to be Darius’s estranged son, who claims not to feel anything. He tells his uncle, “He was an asshole and a fucking coward.” Lawrence attempts to present his brother’s side of the story, but James only wants his father’s wallet.

James already has become a youth at risk, as he flirts with crack, guns, and crime, even though he lives in a rural area rather than an inner city. When older kids attempt to take advantage of him, he’s not afraid to flash his uncle’s gun, but that only leads to more trouble. James once again attempts to shake down Lawrence, who finally snatches the weapon away from him. After drug dealers beat James and Marlee on a rural road, she flees their trailer in a panic, brazenly takes possession of Darius’s house, and threatens to sell the two brothers’ convenience store. It shows the depths of her animosity towards her ex-husband and his twin.

What follows is battle of wills between the aggressive Marlee and the passive Lawrence, whose recovery is signaled by his repossession of Juneau. When James informs his uncle that his mother doesn’t have any money, Lawrence takes him to his store where they stock up on non-perishable food. As the two go for a walk with Juneau – the dog becomes a vehicle for James to bond with his uncle – Lawrence mentions that Marlee had taken legal action to prevent Darius from seeing James. When the volatile Marlee finds out, she explodes at Lawrence, allowing us to fathom the ugly dynamic of blame in a bad marriage gone sour. Marlee tells him, “He left us like a fucking cow!”

Throughout the last third of Ballast reconciliation hangs in the balance. The tenuous process begins when Marlee decides to run the convenience store. Lawrence at first refuses to help, gradually softens, and then asks to be left alone. Hammer resorts to visual storytelling rather than dialogue in several key scenes. When Lawrence finds the bullets to his gun missing, he grabs James and forces him to show where he’s hidden them. The emotional implications of the scene for all three principal characters reside in the image of the bullets lying in a puddle in a nearby field, followed by a shot of Lawrence as he silently returns to his house. The last shot of the film is so understated you might miss it. As Marlee and James initially drive off to school and pass Lawrence, a subtle cut and a pan inside the car provide all the resolution that’s necessary.

Ballast is an intense and somber mood piece, whose bleak and powerful images are not easily forgotten. Some of these include: shots of Lawrence as he sits smoking a cigarette, the rain water dripping off the roof of a building, Lawrence’s boots sloshing through the mud, the rhythmic movement of a windshield wiper while driving in rain, or James watching a train pass as he eats a snack. The Mississippi Delta very much functions like a central character. In a manner similar to Jeff Nichols’ Shotgun Stories, another regional film that was shot in southeast Arkansas, there’s an overriding sense in Ballast that the sheer desolation of the landscape contributes to the bitter enmity of the characters who inhabit it.