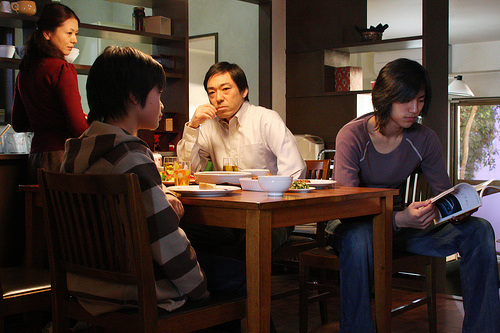 The Wisconsin Film Festival always has had a stellar lineup of outstanding films from around the world. This year is no exception. Two of the films from the 2008 festival – José Luis Guerín’s In the City of Sylvia and Jia Zhang-ke’s Still Life – were among my favorites of last year. Carlos Reygadas’s austere and Dreyer-inspired Silent Light (Stellet Licht), which is playing at this year’s festival, was another, so I very much look forward to an opportunity to see it again. A Mexican film about a Mennonite community in which people speak Plautdietsch and wear cowboy hats, Silent Light struck me as one of the weirdest films I’ve seen in quite some time. Yet Kiyoshi Kurosawa’s Tokyo Sonata, which just played at the 2009 film festival, might challenge it for that distinction.

Tokyo Sonata begins like a typical art film – a family melodrama – but it slowly turns the genre on its head. During a storm, Ryuhei (Teruyuki Kagawa) loses his middle-management position at the Tanita Corporation through downsizing. Jobs are being shipped to China for economic reasons – sound familiar? – where three workers can be hired for the same salary as one Japanese employee. As might be expected given the culture, Ryuhei doesn’t want to lose face at home. Dressed in a business suit and carrying a briefcase that seems an appendage to his body, he pretends to go to work each day, but actually looks for jobs and hangs out at the library and in the park with the other unemployed men.

Ryuhei even meets a former high school chum named Kurosu (Kanji Tsuda), who at first fakes being a high-powered executive. He’s programmed his cell phone to ring five times an hour – he claims it calms his nerves – to simulate still being in the business world. The two men realize the truth about each other when Kurosu’s hunger forces him to head toward the free food line that’s been set up for the homeless. Suspecting that his wife is growing mistrustful, he later invites Ryuhei to his house for dinner to play the role of a business colleague. Kurosu’s worried wife asks Ryuhei to look after her husband once the ring of the cell phone interrupts dinner. Kurosu pretends it’s a call from the company president. Returning to the table, he chastises Ryuhei for his lack of diligence on a work project.

Ryuhei also comes home each day as if he’s been at work, but his family life has become completely dysfunctional. There is little ostensible warmth between Ryuhei and his wife, Megumi (Kyoko Koizumi). At the overcrowded employment office, Ryuhei is offered menial positions instead of the administrative post he desires. When he does land a job interview at a corporation, he’s asked what skills he can contribute to the new company. Ryuhei is so unprepared for the interview that he seems stumped by the question. He mentions being able to sing karaoke. Needless to say, the young interviewer berates him in almost as humiliating a fashion as Chad does to the intern, Keith, in Neil LaBute’s In the Company of Men (1997). Kurosawa at least spares us by cutting the scene abruptly. Ryuhei explodes in the park afterwards, as Kurosu compares the two of them to a sinking ship. “The lifeboats are gone,” he tells Ryuehi – a remark that foreshadows the fate of Korosu and his wife later on. To survive, Ryuhei is forced to take a job in the cleaning crew at the local shopping mall.

As might be expected, Ryuhei’s younger son, Kenji (Kai Inowaki), already has started to act out. When he gets in trouble for passing manga during class at school, the teacher makes him stand in the back of the room. Kenji becomes angry that he’s unfairly being singled out and retaliates by announcing that he’s seen the male teacher reading porn manga on the train. One of Kenji’s peers later congratulates him for fomenting a “revolution” that has caused the teacher to lose his authority over them. When Kenji apologizes, the teacher suggests an accommodation – he wants nothing to do with his student. Kenji also announces to his family during dinner that he wants to play piano. Most families would be thrilled, but the tyrannical Ryuhei rejects it as a whim. In a parallel to his father’s duplicitous behavior, Kenji uses his lunch money to takes piano lessons with an attractive and recently divorced female teacher, Kaneko (Haruka Igawa), whom he has eyed previously on the way home from school.

Meanwhile the older son, Takashi (Yu Koyanagi), whom the parents view as a “mess,” seeks to join the American army in order to create happiness through world peace. His family wants him to stay home. Against his father’s wishes, Takashi goes off to war, but comes back suffering from post-traumatic stress. In Tom Quinn’s The New Year Parade (also playing at the festival), the family disintegrates under the strain of divorce, but here the family crumbles under the duress of staying together.

In Tokyo Sonata, we sense that there’s something wrong with this picture, as evidenced by the trains that whisk by outside the window of the family’s modest dwelling. Megumi plays the faithful housewife, constrained by sexism and tradition as she welcomes the other family members home, cooks and cleans, and quietly endures. At one point, she extends her arms and asks Ryuhei to lift her off the sofa, but her plea goes unheard. As the shot focuses on her arms, she pleads, “Somebody, please pull me up.” Kurosawa cuts and then holds on a closeup of her face. Megumi discovers her husband’s secret one day, but after he beats Kenji she finally confronts Ryuhei and defiantly tells him, “Screw your authority.” When she later runs into Ryuhei, dressed in his red jumpsuit, at the mall, he runs off and the film flashes back three hours earlier in time. It’s at this point – nearly two-thirds of the way through – that the film goes bonkers.

Conventional dramatic films depend on believable character motivation, but once a masked thief (Koji Yakusho) tries to rob Megumi at knife-point in her home, these characters suddenly become capable of doing just about anything. As sirens blare outside, the thief takes off his ski mask by mistake, thereby revealing his identity. He then takes Megumi hostage in a stolen car. After the film loops back to the present – where she bumps into her husband at the mall – Megumi transforms into a verison of Patty Hearst. She tells the stunned thief who tries to let her go, “I’ve come this far, I can’t go home now.” The two of them drive to the ocean where Megumi wonders aloud whether she can start over – the same question Ryuhei also ponders as he lies in the gutter.

The plot threads get nuttier and nuttier. The deranged thief at one point mistakes Megumi for God. In a spectacular moonlit wide-shot, the tide washes over Megumi as she lies on the shore. Meanwhile, Ryuhei gets hit by a car in a hit-and run-accident, leaving him in a heap on the side of the road. Kenji, whose bug-like eyes and mop of hair have made him look anything but the child prodigy his piano teacher claims him to be, gets finger-printed and thrown in jail as a “fare-cheater” for attempting to sneak onto a bus. It’s no wonder that the film’s Australian screenwriter Max Mannix, who thought he was doing an Ozu-like film, is upset by Kurosawa’s treatment of his original script. He told Edward Champion: “The original screenplay that I wrote didn’t ask the audience to trust me here and there, then suspend belief when it was convenient for me. The script I wrote was a consistent piece about what appeared to be an average family. An average family that could not communicate, love, or trust one another.”

Yet what’s truly mind-boggling here is that Kurosawa shifts the tone of this family melodrama with a totally straight face. That’s what gives the film its utterly uncanny quality. Kurosawa shoots Tokyo Sonata in wonderfully cluttered compositions. His cinematographer Akiko Ashizawa often lights the interior scenes with a mixture of warm oranges and cool greens and blues. In terms of color, some shots are divided exactly in half, or between foreground and background, or as a rectangles within a rectangle as a way of suggesting the internal contradictions within the family.

In most films, we usually sense the film’s ending, but this one appears to end multiple times – as if we’re in a dream from which we can’t seem to awaken. Throughout the film, I kept wondering about the film’s title especially because there wasn’t any evidence of Kenji’s musical talent. His own father scoffs at the notion of Kenji being a prodigy, and thinks the teacher is praising him for purely monetary reasons. The question finally does get answered.

As this country lurches toward increased unemployment – now over ten percent in seven states – a film like Kelly Reichardt’s Wendy and Lucy (2008) seems to be a social commentary on these bleak economic times. And it’s not hard to read Kiyoshi Kurosawa’s brilliant and eccentric head-scratcher as a film that resonates in the same sort of way. Tokyo Sonata depicts the disastrous impact that losing a job can have not only on a person’s identity, but also the rippling effect that it can have on one’s entire family.