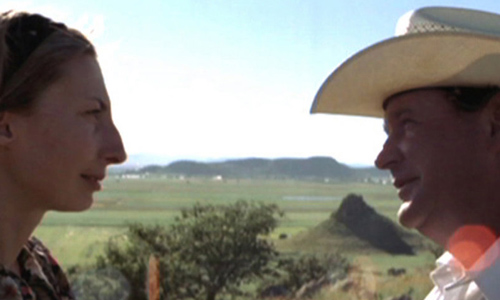 Seeing Carlos Reygadas’s Silent Light (Stellet Licht) for a second time at the Wisconsin Film Festival yesterday morning only confirmed that it’s a truly great film. What surprised me, however, was how much more emotional this formal and austere film seemed on a second viewing. Reygadas somehow manages to imbue each scene with a sense of magical or ecstatic wonder – how is he able to do this? – only to set the viewer up for the intense internal conflict that his main characters suffer throughout the film.

The film begins with a spectacular opening shot that moves from a cosmic starry night to the break of dawn on a rural landscape, which suggests that we might be witnessing creation. Set in a Mennonite community in rural Mexico where Plautdietsch is spoken, the story turns out to be remarkably simple. We watch Johan (Cornelio Wall) and Esther (Miriam Toews) with their brood of six children at breakfast. They seem like a normal, happy, and religious farm family, but once everyone leaves except for Johan, the camera moves closer and he sobs uncontrollably as he sits at the empty table.

We learn right afterwards from a conversation with his auto mechanic friend Zacarias that Johan has renewed a love affair with a waitress named Marianne (Maria Pankratz). Zacarias encourages Johan to be true to his feelings and his destiny. Zacarias tells him: “Something very powerful has come over you. You’ve found the woman nature meant for you. Very few people know what that is.” After what seems like interminable silence, Johan explains that Marianne is the better woman for him. Zacarias suggests that this is something even sacred. A Spanish pop song shifts the mood of the scene from anguish to light-hearted joy as the camera follows Johan’s pickup truck as it drives in circular movements that suggest the power of sexual desire, while Johan sings along with the radio in anticipation of his tryst with Marianne. As Johan heads off, the camera holds on the shot until his truck disappears from the frame.

Reygadas cuts to a shot of a fantastic landscape that reminds me of certain paintings by Verne Dawson, punctuated by the sound of insects. In an extended take, the camera follows Johan’s feet as he tromps over yellow flowers in a field only to wind up on a woman’s leg. We see a medium shot of Johan and Marianne from the side as the two of them stare at each other longingly. She removes his cowboy hat, and they kiss passionately for nearly two minutes as light flares into the lens. Reygadas cuts to a shot of Johan showering inside a stone building afterwards. The camera heads into the dark space, in which his naked body moves in and out of shadow. Marianne will later remark after they make love again, “I smell of sex.”

Johan’s affair turns out not to be a secret to Esther. His inability to forsake his adulterous relationship is a source of pain for all three of the people involved. This is true in all romantic love triangles, of course, but it’s hardest on Esther, who remains a loving wife throughout the ordeal. It’s no wonder that she literally dies of a broken heart during an intense rain storm – as if nature is reflecting her inner turmoil and weeping as bitterly as her. The shot of her collapsed body at the trunk of a tree and her abandoned blue umbrella nearby is a particularly haunting image that lingers with us for a long time afterwards.

What follows – the direct reference to Dreyer’s masterful Ordet (1955) – remains a source of controversy among film critics and scholars. My esteemed colleague David Bordwell writes: “Ordet, suffused with religious debate, earns its miraculous finale, while Silent Light, for all its austerity, is a film of the flesh, and its spiritual coda seems to me somewhat forced. But I’m willing to be convinced otherwise.” Yet the theological fine points of the ending, at least for me, remain beside the point – I can live with the ambiguity. Whatever the case, Silent Light may be a film of the flesh, but it’s clear that the religious beliefs of the characters only heighten the sense of Johan and Marianne’s moral dilemma. Without the added contradictions of their religious beliefs, they wouldn’t suffer nearly as much.

When Johan later admits that he’s made a mistake in marrying Esther in comparison to his love for Marianne, truth be told, it’s really been compounded by six other mistakes born out of their union. And when, at Esther’s suggestion, Johan takes his kids with him when he visits Marianne at the restaurant and then slips off to have passionate sex with her, he’s really being downright sleazy, no matter what he tells himself. His brutal honesty with Esther about his actions with Marianne is actually a form of emotional torture.

Marianne announces that she’s breaking off their relationship afterwards. But as they rejoin his children who are watching TV in a van, Reygadas shoots them from behind, allowing us to view them clasping each other’s hand behind their backs. I always tells my film production students that you’re always looking for the very best place to put the camera within a scene, and damned if Reygadas doesn’t nail it every time – often in astonishing and incredibly unpredictable ways. This includes routinely flipping over the axis line. Rather than being jarring, here it seems like the most natural thing in the world.

Reygadas is not known to be a filmmaker who relies on a traditional script. His films aren’t written, but rather conceived in purely cinematic terms. Dialogue, for instance, is kept to a virtual minimum throughout the film – he often employs the power of silence over words. It’s hard to imagine how Reygadas manages to get such affecting performances from non-professional actors, but he tells his story primarily through images and sounds. Like Antonio Campos’s Afterschool (which played at the festival) and Lance Hammer’s Ballast, he also avoids non-diegetic music, so as not to manipulate the viewer’s feelings. Reygadas pushes each shot in Silent Light to its maximum potential. The stifling subtext of the situation allows him to create dramatic tension simply by extending the temporal duration of individual shots.

When Johan visits his preacher father to inform him of the affair and his dilemma, the scene begins with his elderly parents leading cows into the milking parlor in a wide shot. We watch as the father and mother go through the elaborate process. Johan turns up unexpectedly and tells his dad: “I fell in love with another woman.” Avoiding eye contact, his father comments, “You’re joking,” but nevertheless suggests that they go outside. When the door opens onto a snowy landscape, it gives us a surprising jolt. As the two take a walk into the field, the camera follows them from behind, allowing the sound of the crunching of their feet in the snow to enhance the dramatic tension. When they finally stop, the camera moves past them and pans across the landscape, suddenly transforming into a point-of-view shot. His father remarks, “Planting will be delayed this season, Johan,” suggesting an avoidance of the issue at hand. After the pan continues, the father finally asks whether Esther knows about it. The panning shot continues until it winds up framing them in a two-shot. Reygadas cuts to a wide shot of the landscape again, as the father suggests that they should go inside.

Reygadas uses the awkward silence between the two men to heighten the drama of Johan’s revelation. As Johan stares at a calendar on the wall, and Reygadas’s camera focuses on it, the father finally tells him, “What is happening to you is the work of the enemy, Johan.” His son answers, “I think it’s God’s doing.” Johan sits down and asks his father to help him sort out which woman he should love. The camera focuses on an extreme closeup of the father’s face that crops off his eyes, as he discusses falling for another woman shortly after Johan was born. He forced himself to break it off and counsels Johan that the feeling will pass. While not wishing to be in Johan’s shoes, he also admits to feeling a sense of envy. The father doesn’t offer advice, but suggests that if Johan doesn’t act quickly, he runs the risk of losing both woman.

Throughout Silent Light, Reygadas uses sounds of nature – birds, insects, and animals – to convey the sense of a world that feels incredibly animated. Esther comments on this just prior to the rain storm. She expresses nostalgia for the past when the two of them were happy. Esther tells Johan, “However way it was, just being next to you was the pure feeling of being alive. I was part of the world. Now I am separated from it.” After a long pause, Johan answers, “I feel the same.” She responds, “How I wish it were all a bad dream. To close and open my eyes and be back in that time, in that feeling.” Shortly after that, raindrops appear on the front windshield.

In Reygadas’s pantheistic vision, the world is indeed a miracle. It is we human beings who manage to torture ourselves and each other with our inexplicable desires, thereby turning an earthly paradise into our own private hells.