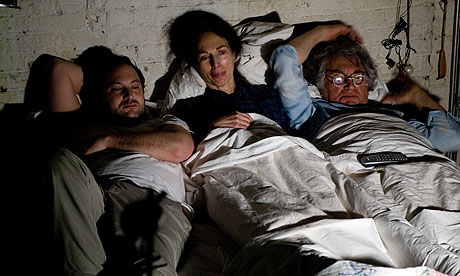 Azazel Jacobs’s low-budget second feature Momma’s Man (2008) serves as yet another example of an independent film that deliberately blurs the line between non-fiction and fiction as an alternative narrative strategy (see previous post). The thirty-something protagonist is roughly the writer/director’s age. Jacobs sets the film in the lower-Manhattan loft in which he grew up, casts his own parents – noted avant-garde filmmaker Ken Jacobs and painter Flo Jacobs – in the role of parents, and his best friend from high school as, well, his best friend. And a flashback to childhood depicts footage of the film’s director rather than lead actor. It’s difficult not to get lost in the autobiographical hall of mirrors Jacobs creates. That Momma’s Man, as Voice critic J. Hoberman suggests, at times slips into something that feels like a psychodrama turns out to be part of the power and fascination of the film

Momma’s Man tells the story of Mikey (Matt Boren), who on a business trip to New York City during which he visits his folks, finds himself unable to leave. That wouldn’t necessarily be a problem, but Mikey has a job and a wife and infant back in Los Angeles. Mikey’s flight gets overbooked and he has to take another one the next day – but the situation rapidly transforms into something more vexing. Jacobs never makes it clear what is going on with Mikey. Is it nostalgia for his happy childhood? Has Mikey made a double mistake in marrying and having a child? Does he regret relocating to the West Coast? Does it suddenly dawn on him that his parents are growing old? Is his wife having an affair? Is Mikey having a nervous breakdown? For some critics and viewers, Jacobs’s use of buried motivation poses a problem. They want Mikey to be explained, but Jacobs wisely opts for ambiguity.

Rather than being goal-driven, as manual writers would insist, Mikey is a passive protagonist. His conflict is internal. Part of the pleasure of Momma’s Man is watching Mikey’s behavior for clues or hints about what might be going on inside him, and Jacobs provides just enough of them to keep us guessing. Mikey’s parents are perplexed. His father seems caring, but aloof. His mother dotes on him in a very smothering way. Her desire to offer him something to eat or drink becomes an irritating mantra (it’s no wonder he’s overweight). Most people would run for their lives – I’m speaking of myself here – but Mikey regresses. He hangs around the loft in his longjohns and watches a movie on television, while lying in bed with his parents. He rummages through old scrapbooks and love letters. He plays the guitar and sings lyrics he’s written in high school so loudly that his father has to tell him to turn the music down.

Mikey begins to embellish his situation. He’s not being malicious, so much as irresponsible. He lies to his wife Laura (Dana Varon) and even to his parents when he implies that Laura might be having an affair. We do see her visited by a neighbor named Tom (Richard Edson from Jim Jarmusch’s Stranger Than Paradise), but there’s no clear evidence that anything is going on. The film begins with a closeup on the clasped hands of Mikey and his mom. He asks, “You sure everything is okay?” She answers, “Of course.” Her initial note to him alludes to a doctor’s appointment. Mikey later tells his co-worker his mother’s been in the hospital as an excuse for missing work. Is she, in fact, ill? There’s no further indication of this either.

As the film progresses, Mikey develops agoraphobia – he’s unable to walk down the hallway stairs of the loft. There’s a sense that Manhattan has receded or disappeared, only to be replaced by his family’s claustrophobic loft – chock full of stuff – made dark and more womb-like by Tobias Datum’s cinematography. When his parents indicate they’re going for dinner in Chinatown, Mikey’s immobility prevents him from joining them. As he attempts to shave, he covers his entire face with lather and stares into the mirror. In an effort to get beyond the threshold of the loft, he gets drunk and crawls on all fours. During the night, he literally hurls himself down the stairs, which succeeds in breaking the spell.

Mikey seeks out an ex-girlfriend named Bridget (Eleanor Hutchins) after finding an angry letter from when they were in high school. Does he have lingering romantic feelings? When they meet at a coffee shop, Bridget brings along her young child in a stroller. It’s an awkward get-together. She asks, “So, what’s up?” Mikey refers to the letter and apologizes. Bridget appears bewildered. She’s obviously forgotten whatever pain he caused her. When Bridget asks about him, Mikey shows her photos of his wife and daughter, Anna. After she returns them, he stares pensively at the one of Anna. If Bridget is no longer the same person, Mikey’s friend Dante (Piero Arcilesi) – obsessed with boxing tapes and the Indigo Girls – also seems to have morphed into someone else. After Dante has a drug relapse, Mikey observes him with bemused detachment as his old pal manically works out and sings “Closer to Fine” off-key.

The fact that things change seems to be at the root of Mikey’s problem. He wants to stop time, or go backwards. He clings to the past – to earlier memories. Matt Boren plays Mikey with a quizzical look that fits his character perfectly. There’s a scene toward the end where his mother gets him to sit on her lap like an overgrown baby, dwarfing her in size. The image serves as an apt metaphor. He’s not a momma’s boy, but a grown man – stuck in a state of arrested development. As he snuggles and cries and his mother comforts him, she recalls a sweet image of her actual son, Azazel, as a child – fast asleep on a plate of spaghetti. In the old home-movie footage (from Ken Jacobs’s epic Star Spangled to Death), she lovingly lifts up Azazel and places him in bed. The next morning, Mikey listens to his phone messages and calls Laura.

Very little happens in Momma’s Man. Jacobs avoids the causality of classical narration. Much of what occurs within the family dynamic involves subtext – the things that remain largely unspoken. At one point his father demonstrates a mechanical windup toy – a headless crawling baby. The parents do try to intervene. In a family conference, his father confronts him, but Mikey becomes defensive and snaps, “Are you asking me to leave?” His mother inquires about Laura, “Is there someone else?” As Mikey begins to cry, his father presses him, but his mother insists, “It’s all right. You can stay here as long as you want.” His father later overhears a despondent message from Laura on the answering machine and watches Mikey erase it. Later, as Mikey starts to discuss Laura seeing someone, his father responds, “Can you recall us once lying to you?”

In Momma’s Man, Jacobs employs an episodic structure in which the dramatic and character arcs have been flattened. Just as mysteriously as Mikey falls into a personal crisis, his funk lifts by the film’s end (though I’m sure there will be consequences once he gets back to Los Angeles). I suspect some female viewers will find Mikey’s self-absorption to be a problem – for obvious reasons. But it’s Jacobs’s willingness to explore these issues so honestly that makes Momma’s Man such an absorbing and distinctive character study.

Momma’s Man played at the Wisconsin Film Festival back in April. It’s now available on DVD from Kino Video.