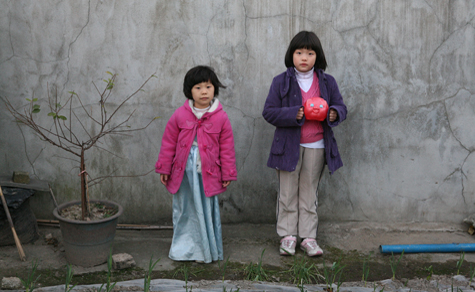 Set in Korea, So Yong Kim’s American indie Treeless Mountain (2009) tells the story of two young girls – seven-year-old Jin (Hee Yeon Kim) and her younger sister Bin (Song Hee Kim) – who are abandoned by their single mother (Soo Ah Lee). It’s initially supposed to be only temporary while she seeks to track down her deadbeat husband Kang, but the kids wind up getting shuffled off to live with Kang’s sister Big Aunt (Mi Hyang Kim) and then later to their maternal grandparents on a farm.

Stylistically, Treeless Mountain is shot more like a poetic documentary than a fictional film. Kim chooses not to linger too long on the emotional resonances of individual scenes. Instead, the superb hand-held camera work (by Anne Misawa) and editing fracture the narrative into episodic incidents, abruptly cutting from one detail to the next – more like an experimental film. And with nonprofessional child actors, perhaps that’s the best way to capture this type of story.

Jin’s face becomes a barometer of the hurt and pain of what’s happening to the children. When Big Aunt reads a letter from the mother, explaining she can no longer afford to care for the children and they must go to live with their grandparents, the camera focuses on Jin, who in a tearful outburst accuses the aunt of lying and trying to get rid of them. Poor Bin, who wanders through the film in a blue princess dress with fur trim – like a sad refugee from a once-festive party – is merely bewildered. We later realize that her dress represents an attempt to hold onto the memory of her mother, who bought the outfit for her.

The camera usually sticks very close to Jin and Bin, which has the Brakhage-like effect of presenting much of what happens from a child’s perspective. As a result, Treeless Mountain – more than any other recent narrative I can think of – manages to replicate what it’s like to experience the world as a child, not only visually, but with the partial comprehension of unfolding events that marks childhood. Jin unconsciously senses the vulnerability of her situation – the mysterious person who comes to the door and interrupts dinner – causing her anxiety to become manifest by wetting the bed. Her mother is actually very understanding when it occurs. Later, at Big Aunt’s house, Jin lets Bin take the blame when she has another night-time accident. Her aunt is not nearly as compassionate.

Although Big Aunt isn’t outright cruel, she turns out to be a poor parental surrogate. She extorts money from a neighbor over a supposed injury to Bin. Big Aunt eats and drinks at a café, but doesn’t want to spend money on the girls, whom she insists can eat at home. Big Aunt is often too drunk or hung over to feed the two hungry children. Yet when she abandons them at their grandparents, Jin and Bin still instinctively chase after her and wave goodbye frantically. (Bin later tells Jin that she misses not only her mother and father, but Big Aunt as well.)

The dynamic between the two sisters is very much at the heart of the film. When the mother arrives home the first night, she scolds Jin for being late in picking up Bin from the babysitter. Before the mother leaves the girls with Big Aunt, she tells Jin, “Take care of Bin for me. I believe in you, Jin.” It’s no wonder that Jin resents the responsibility of always having to watch over Bin, which is why she lets her little sister wander off by herself, refuses to play with her after their mom leaves, sets her up to take the blame for bedwetting at Big Aunt’s house, tries to ditch her as they walk up a street, and calls her “stupid” when Bin still asks about the mother as they’re on route to live with their grandparents.

To Jin, Bin has become an unwanted appendage, but they only have each other – that is the bond that inextricably ties them together, no matter what. And there are indeed moments of genuine warmth between the sisters. When they sing songs about grasshoppers with great exuberance, they momentarily seem to forget their sad situation. Jin also comforts Bin the one time she cries over their mother, protectively holds her hand as they cross a busy street, and even tutors her with reading at the farm.

The film begins with Jin learning how to tell time at school. But the irresponsible Big Aunt never bothers to re-enroll her in school – leaving the children to wander around the streets of the city. The passage of time becomes a central element in the story. Their mother gives the two girls a large red piggy bank and insists that she’ll return once it’s full of coins. Jin and Bin attempt to make money hawking fried grasshoppers to school kids in order to feed their plastic piggy. After Bin shakes out a coin to buy a sweet bun and gets smaller change, the two realize that they can speed up time by exchanging larger denomination coins for many more smaller ones. From a huge mound of dirt and rubble – the treeless mountain of the title and the image that apparently served as the film’s inspiration – Jin and Bin wait in vain for their mother’s return on the bus.

Once Big Aunt dumps them on their grandparents, she and the grandfather get into a loud argument. The grandpa doesn’t even try to hide it from the girls that they’re not wanted. But the grandma (Boon Tak Park), who has a wonderfully wizened face and wears a blue towel fashioned into a hat, turns out to be totally accepting of Jin and Bin, and the girls return her kindness in their own touching way. The pace of life on the farm feels slower, the tone shifts slightly, the colors become golden, and the film ends with a wide shot of Jin and Bin as they sing and walk through a overgrown field.

Instead of the conventional way of breaking down the story into individual shots, Kim (who studied painting, performance, and video at the School of the Art Institute of Chicago) uses individual shots to build her story. She uses wider landscape shots as temporal transitions, but also to comment on events. When Jin and Bin are told by Big Aunt that their mom isn’t returning, dark clouds obscure the sun. Yet Treeless Mountain is infused with such pure poetry that images never feel overtly metaphorical or symbolic, nor does Kim resort to using music to underscore the feelings of her characters.

What’s especially notable about Treeless Mountain is the precision of So Yong Kim’s spare visual style and understated narration. And if the emotional impact of the film feels like a dagger has been thrust into your heart, Kim does it with such skill and artistry that she doesn’t leave any trace of an incision.

Treeless Mountain screened at the 2009 Wisconsin Film Festival. It will be released on DVD in this country on September 15 by Oscilloscope Laboratories.