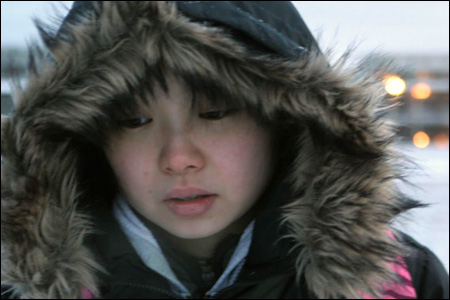 As the typewritten title scrolls across the lower right portion of the screen, we hear footsteps crunching snow, which continue over black. Aimie (Jiseon Kim), a Korean-American teenage girl in a fur-lined parka, trudges toward us in closeup, as we see a couple of high-rise buildings in the background. Over an image of this desolate urban landscape (Toronto), she writes to her absent father about going to school, “My friends are white, black, Chinese, and Japanese, too. Isn’t that amazing?” The film cuts to a closeup of Aimie’s face as she eats a sandwich by herself in the lunchroom. After school, she spends time with a male Asian friend named Tran (Taegu Andy Kang). Aimie asks Tran whether his breaking up with his girlfriend Janet is somehow connected to her, but he denies it. What she’s really asking is whether he likes her, but the subtlety of her indirect question is lost on him, a pattern that will continue throughout their courtship. In her debut feature, In Between Days (2006), So Yong Kim (who also directed the recent indie film Treeless Mountain) does a terrific job of capturing the mixed signals that often pass for communication amongst teenagers, especially when they are compounded by the pain of divorce and cultural displacement. In Between Days manages to convey the temporal aspect of adolescence – the sense of boredom of teenagers simply hanging out together for long stretches of dead time.

In Between Days deals with Aimie’s life as a new immigrant, but does so mostly by focusing on her relationship with her only friend Tran, a petty criminal and slacker, who wears a signature hand-woven wool ski cap for most of the film. When Aimie talks about “doing it” with him, we assume she’s talking about sex, but it turns out to involve her giving him a tattoo. But when he later asks her again while they’re watching television together, it is clearly sexual. This is never made explicit, but rather conveyed through subtle gestures and reaction shots. Like the characters themselves, the viewer tends to get lost in the labyrinth of their confused and conflicted personal feelings for each other. Aimie does not even possess the vocabulary to articulate what she’s experiencing, which is why adolescence represents such a traumatic period of transition for most of us. This might explain the film’s title, which also happens to reference a song by The Cure.

Aimie writes Tran’s name on the fogged window of the bus, indicating her romantic feelings for him. But when he suggests that they engage in sexual intercourse, Aimie indignantly refuses. Right afterwards, she quits her English class in order to buy him a very expensive bracelet. When she gives it to him, she says diffidently, “Hey, I saw this and got it. I thought it would look cool on you.” Kim’s camera focuses on the reaction on her face and then on his to capture the ambiguous resonances of this moment. At a party afterwards, Aimie becomes jealous when she sees Tran flirting with other girls, and retaliates by doing the same, causing Tran to insist that they leave. As the two wait at the bus shelter and then ride home, the tension between them is palpable. Concerned about his infected tattoo, Tran awakens her in the middle of the night, but when Aimie comes over, she shows little sympathy and calls him a sissy. Tran later feels up her breasts as she dozes off. She responds by calling him a pervert. He counters, “You got nothing to grab anyway.” A subsequent shot of Aimie looking at lingerie in a store window reveals her true feelings.

Tran turns up at her house and suggests that he was joking and thinks of her more like a “guy friend” – an attempt at an apology that completely backfires. To get back at him she tells him she kissed Steve at the party, which makes Tran noticeably jealous, indicating that they know exactly how to wound each other. When Tran asks whether Aimie really did kiss Steve, she denies it. Aimie, however, becomes even more sullen and withdrawn. Once they are together again, Tran asks her, “Are you on the rag?”Aimie laughs in disbelief at his crassness and calls him a jerk. After he flirts with another girl on the way back from the bathroom, Kim’s camera lingers on the two of them as they sit in a game room and don’t speak to each other, unable to break the stalemate.

Things don’t get any better between the two teens. Tran tries to get Aimie to go to a party, but she refuses for no apparent reason – she stays home and does laundry – other than the fact that she’s still angry with him. As the night wears on, she proceeds to call Tran and ends up alone in a karaoke place, where she sings an animated but sad pop song. Tran later shows up at her house after he’s been thrown out of his. Aimie makes Tran beg to be let in, then insists that he sleep in her closet, so as not to be detected by her mother. When she finds out that Tran is planning to move into a room at Michelle’s house, Aimie becomes upset once again. After she presses him, Tran insists, “For me . . .you’ve always been . . . from start to end . . . just a good friend.” The camera again focuses on their faces before Aimie simply walks away. We see her delayed emotional reaction as a tear streams down her face while riding a bus.

Like Jim Jarmusch, So Yong Kim (who co-wrote the screenplay with her filmmaker husband Bradley Rust Gray) builds the story from an accumulation of details, and from character rather than plot. She told director Ryan Fleck (Half Nelson and Sugar) in an interview in Bomb: “I usually develop my characters from little moments, and hopefully at the end of the writing process, I feel like I have a whole person. Everything – other supporting characters and the whole overall story – has to be based on my main character. I don’t really put that much importance on a big story or a theme.” Her main character is as ambivalent as Willy in Stranger Than Paradise (1984). Even after viewing the film twice, I still have a few questions about what’s going on between Aimie and Tran, but Kim suggests that adolescence is rooted in buried motivation. And, like Paul and Noel in David Gordon Green’s All the Real Girls (2003), the story of Aimie and Tran is ultimately one of missed connections.

Aimie’s real love and feelings are channeled into the letters and images she sends to her deadbeat dad back in Korea. His absence only causes her love for him to grow larger in magnitude. Aimie’s anger over her parents’ divorce is reserved only for her mother (Bokya Kim), who works hard to support the two of them as a single mom in a new country. When her mother asks how she would feel about having a new father, Aimie answers that she already has one. The mom insists that her father abandoned them, but her daughter snaps, “Is that my fault?” When her mother gets ready to go out one night, the sulky teenager calls her “a cheap whore.” Yet Aimie hears her mother crying on the couch one night and calls out to her, as she watches sympathetically from the stairwell. It’s the only bit of warmth we see between them. Otherwise her father remains the specter behind what Aimie is trying to work out with Tran. It’s her father rather than Tran who represents the gaping hole in her heart – the source of her incredible loss and longing – that no doubt results in her moody and erratic behavior.

Kim uses wide shots and spoken voiceover for Aimie’s letters to her dad, which serve as transitions in the film. Otherwise, cinematographer Sarah Levy keeps extremely close to the characters by using a hand-held camera that gives a sense of intimacy to what transpires. Aimie and Tran often simply stare at each other as a substitute for talking. So Yong Kim trusts the camera to capture the emotions that are registered on their young faces, especially those of Jiseon Kim, who gives a truly extraordinary performance for a nonprofessional actress. What’s not said between Aimie and Tran is more important that what’s actually said, which suggests the unspoken undercurrent – the film’s subtext – that provides the real energy in the film.

There’s the scene in Jarmusch’s Stranger Than Paradise after Eva leaves New York City, where Willie and Eddie sit and drink beers in awkward silence for what feels like an eternity. So Yong Kim keeps her scenes extremely short by conventional standards, but milks the dead time – the negative space of the film – in a similar assured way by relying on visual storytelling rather than dialogue to tell her story.