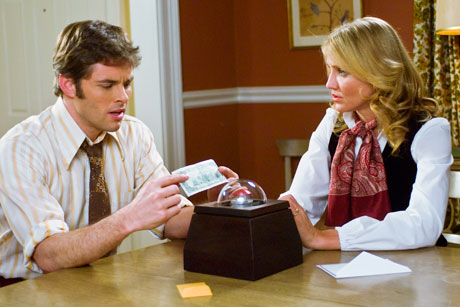 This is another way of saying that The Box represents a retreat into genre – suspense, science fiction, horror, and melodrama (that ultimately goes way over the top). In trying to be more safely commercial, Kelly has fashioned a slightly different version of Invasion of the Body Snatchers mixed with weird Lynchian tics and a score by members of Arcade Fire that mimics Bernard Hermann’s soundtracks for films by Alfred Hitchcock. The Box is an adaptation of Richard Matheson’s short story “Button, Button” that later became an actual episode of Twilight Zone. Kelly expands the brief story into a deeply personal and somewhat autobiographical feature that imagines his own parents as fictional characters – ordinary good people who become implicated in supernatural murder as a result of greed. Warner Brothers is actually having a difficult time selling this. Reportedly made for $30 million, The Box so far has recouped less than half of its production costs.

Even as science fiction, the story itself seems fairly implausible. Set in Virginia in 1976, a package arrives at the door of the Lewis family early one morning before Christmas. The enclosed “button unit” (as it’s called) comes with a proposition: push the button and get paid $1 million, but a stranger will die as a result. Things just happen to be go wrong for the couple financially as they are deciding whether to accept the offer. The school teacher wife, Norma (Cameron Diaz), learns that exclusive Libby Hill is getting rid of the faculty tuition discount that will impact their overly inquisitive son, Walter (Sam Oz Stone), while her husband, Arthur (James Marsden), employed by NASA and part of the Viking space mission to Mars, fails to get into the astronaut program as a result of flunking the psychological test. Given only twenty-four hours, the couple grapples with the moral decision. Norma suggests they barely are able to make ends meet, which causes us to wonder why Arthur drives a fancy Corvette. Whatever the case, Norma impulsively pushes the button, wrecking havoc on their lives.

Kelly has made a very old-fashioned and conventional film on some level, but loaded it with many personal (his father worked on the Viking project at NASA and his mother taught school) and downright odd touches. There aren’t many Hollywood genre pictures where the characters spout the philosophical views of Jean-Paul Sartre regarding personal freedom. Kelly includes lots of exposition to explain many of the nutty events that subsequently occur, but most viewers nevertheless will end up scratching their heads. “I like mystery, don’t you?” responds the overly formal, but menacing antagonist, Arlington Steward (Frank Langella), at one point, as if Kelly is aware that the answers he provides only lead to more questions. He invokes Arthur Clarke’s Third Law, suggesting that “any sufficiently advanced technology is indistinguishable from magic,” which allows Kelly to dispense with classical notions of causality.

Kelly himself appears obsessed with scientific and paranormal mystery, Sartre’s vision of hell No Exit, NSA conspiracies at Langley Air Force Base, mind control experiments, portals to other dimensions, radio signals from Mars, and existential choices between self and others and between spouses and children. He’s also intrigued by issues having to do with the physical body, such as disfigurement. Norma limps as a result of an accident and medical malpractice when she was only a teenager – she lost four of her toes as a result of radiation when the doctor inadvertently left her foot under an X-Ray machine. Arlington Steward was struck by lightning and has lost half of his face, and he now claims to be working for those who control the lightning.

Norma’s limp is a focus of everyone’s morbid curiosity, including one of her students at Libby Hill, who gets her to expose her mutilated foot to the class. At Langley, Arthur is working on fashioning a prosthetic foot as a holiday present for Norma. When Norma and Steward meet at the library, he questions her about her first response to seeing his disfigurement. Rather than feeling pity, Norma admits that she actually felt deep love for him. Although she has lost several of her toes, she can’t imagine what it would be like to have to wear her deformity on her face. In other words, Norma identifies so strongly with the grotesque that it might in some way explain why she pushes the button in the first place.

Kelly appears to be so obsessed with providing the sci-fi backstory that he fails to notice the bewildering elements of his plot. Much of the story centers around Norma’s sister getting married. Their father (Holmes Osborne) conveniently happens to be a cop, but I can’t tell you why the wedding rehearsal and wedding are such extravagant affairs, or why the dad isn’t paying for it. Or, for that matter, why does Norma’s sister seem less her sister than a total stranger? Kelly could care less about such narrative details. It is during the sequence at the library, however, that he completely loses control of the material, as Steward’s wife makes an unexpected appearance and zombies proliferate. Arthur chooses a gateway that determines his fate, travels through a tunnel of light, and ends up in a mass of water that hovers over Norma’s bed as she sleeps, before crashing down on her and flooding the house. Walter asks, “Where did all this water come from?”

In interviews, Kelly seems extremely proud of the fact that he shot the film with a Genesis camera. He did this largely to manipulate Steward’s face digitally rather than through makeup. I found the extreme soft focus and mustard palette of the cinematography to be a bad tradeoff, even if Kelly uses the digital effects and art direction to recreate the look of the 1970s. The Lewis’s home is dominated by outrageously kitsch patterned wallpaper. There are jokes about Lynard Skynard, wide sideburns, and peace signs. We even glimpse a shot of the Clipper ships passing the World Trade Center on TV.

Critics have had decidedly mixed responses to the film. J. Hoberman, for instance, calls it “basically a sock of coal for Christmas,” while Amy Taubin in Artforum writes that “the movie generates a free-floating anxiety that lingers long after the lights come up.” What I appreciate about The Box are its moments of unintentional wackiness. Mainstream films are neither this unabashedly personal nor this cryptic. Yet I’m baffled by Kelly’s suggestion that in making The Box he’s somehow giving the studios what they want. He told the New York Times: “They’re the bank, so you’ve got to just figure out how to work with it. I’ve learned that the smart way to go about it is to learn how to play ball.” Kelly doesn’t seem to have a clue about the logic and strategies of films targeted to appeal to mass audiences. I suspect for him Hollywood might represent the ultimate paranormal mystery.