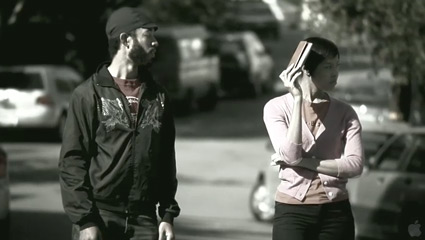 A couple of weeks ago Lynn Hirschberg had an article on mumblecore in the style magazine of the Sunday New York Times. It featured a lead photograph of so-called mumblecore personalities, only it didn’t feature Andrew Bujalski, Greta Gerwig, or Joe Swanberg, but several other folks, who, with the exception of Jay Duplass (director of The Puffy Chair and co-director of Baghead), didn’t quite seem to belong there, including Barry Jenkins, who wrote and directed Medicine for Melancholy (2008). Gerwig and Bujalski apparently declined to participate in the photo op – which featured everyone decked out in designer clothes and eating a gourmet lunch with a caption that read “not-so starving artists” – while Swanberg apparently nixed being photographed with the more “commercial” Humpday crowd. Jenkins, whose film played at the SXSW Film Festival, has suggested a connection to mumblecore in interviews, but I don’t really think his extremely impressive first feature fits the label.

Medicine for Melancholy tells the story of the aftermath of a one-night stand, in which the two African-American characters spend the next twenty-four hours together. Independent films such as Richard Linklater’s Before Sunrise and Aaron Katz’s Quiet City have dealt with two strangers spending the equivalent of a day together. But those films were really all about flirtation and the anticipation of romance – two people falling in love – whereas in Jenkins’s film, the two characters are attempting to get to know one another after sexual intimacy has already occurred. Anyone who has ever found herself or himself in such a predicament might be able to relate to the anti-romantic difficulties of struggling to discover some semblance of mutual compatibility. Medicine for Melancholy does convey the awkwardness of communication and personal relationships found in mumblecore films, but the issues here are compounded by race and class, which add another layer of complexity and substance to Jenkins’s film.

What’s interesting about Medicine for Melancholy is how rarely – other than in the films of Spike Lee or Charles Burnett – we have been able to see a film about the lives of ordinary African Americans represented on the screen. The film begins with Micah (Wyatt Cenac of The Daily Show with Jon Stewart) and Jo (Tracey Heggins), both in their late twenties, leaving a previous night’s party early the next morning. Rather than being the overly talkative characters who populate mumblecore films, Micah and Jo, for the most part, keep their emotions buried under a cool (if somewhat sullen) veneer. In the film’s first scene, in which they each brush their teeth with their fingers in the bathroom, they don’t say anything to each other. The breakfast at a nearby café contains an undercurrent of tension, especially when Micah confesses, “This is a little embarrassing, but . . . I kind of forgot your name.” Jo looks away and responds, “I don’t know if we really got there.” She promptly lies and tells him her name is “Angela.” The two share a cab ride, but Jo splits once they get near her place. When she inadvertently leaves her wallet on the floor of the taxi, Micah discovers Jo’s real name and, after some effort, manages to track her down.

It turns out that Jo lives with a wealthy art curator, who’s currently in London. Micah asks, “Is he white?” She answers, “Does it matter?” Micah responds, “Yes and no.” The boyfriend does turn out to be white. Now irritated, Jo asks Micah to leave, but he sweet-talks her into allowing him to accompany her on an errand. Afterwards, Jo suggests going to the art museum, but Micah refuses.

Micah’s remark not only reveals the class differences that divide them, but also that their world views are completely different (which extends to issues of personal hygiene). They end up at MoAD (Museum of African Diaspora) rather than MoMA. Micah announces, “MoAD, mamma, not MoMA!”

Michah later drunkenly complains, “Think about it. Everything about being indie is all tied to not being black.” For Micah, the fact that they are two young black people in a white urban area suggests they share a special bond. But, to Jo, that’s patently ridiculous – she refuses to let herself be categorized by a single word. Micah insists, “Me? I’m a black man. That’s how I see the world. That’s how the world sees me. But if I have to choose one, I’m black before I’m a man. So, therefore, I am black.” In other words, he contends that race is a central part of his identity, whereas for Jo, it’s not – she believes people should be judged for themselves rather than by the color of their skin. In the age of Obama, the question Jenkins raises – whether race still matters – is certainly a timely one.

Despite a certain physical attraction, the more these two people get to know each other, the wider the chasm between them seems to grow, even though, as Micah points out, they are part of a very small minority of African Americans living in San Francisco – a number that’s declining as a result of inflated real-estate prices. In point of fact, we never really get to meet any other characters in the film as Micah and Jo move through San Francisco before they eventually go dancing at a white club. By limiting his story to only two central characters, Jenkins cleverly shows their isolation from the city as well those who reside within it. At one point, they stumble upon a community housing meeting about the perils of gentrification, which underscores Micah’s strong political sense and provides a striking contrast to Jo’s apolitical side.

Micah’s apartment in the Tenderloin district is cramped in comparison to the one in which Jo lives with her boyfriend. Both Micah and Jo use the opportunity to snoop around while the other person is taking a shower. Jo opens Micah’s laptop and learns from his Facebook page that he has just had his heart broken in a previous relationship. In an ironic twist, the picture indicates it was by a white woman, which suddenly gives a different spin to his character. When Micah returns, she finally asks him what he does for a living – he installs aquariums. Jo makes tee shirts of women film directors. This explains why the one she’s wearing says “Loden” – an obscure reference to Barbara Loden, the writer and director of Wanda (1970). Micah asks, “You make money off that?” Jo answers, “It isn’t about that.” When Micah offers Jo some red wine, she’s shocked that he keeps it in the refrigerator. Her reaction says it all.

I mentioned that Medicine for Melancholy doesn’t really seem to be part of mumblecore. One reason is that the film seems carefully scripted rather than improvised. It’s also more stylized, and uses professional actors from Los Angeles rather than nonprofessional friends. Jenkins, who went to film school at Florida State, has a great visual sense. He and cinematographer James Laxton drain most of the color from the film, so that it appears to be black and white with occasional accents of muted color, such as the Micah and Jo’s red shirts in the first scene. The film contains many memorable shots such as the one near the film’s beginning where Micah and Jo walk up a hill and disappear down the other the side, so that when they desert the frame we’re left with a spectacular shot of the San Francisco skyline. There are many tracking shots of the city from the cab or as Micah and Jo ride their bikes. When Micah talks about his affection for San Francisco, the images of the city are suddenly rendered in vivid colors. And the film’s final shot, involving an exhilarating camera movement, is pure poetry.

Medicine for Melancholy is at heart a regional film. Jenkins’s portrayal of San Francisco, in many ways, helps to define the ambivalence and mood of these two characters, which Cenac and Heggins manage to capture so well through their understated performances. Although Jenkins employs naturalism, it’s the type that seems aesthetically closer to that of Kelly Reichardt, So Yong Kim, and Ramin Bahrani than to filmmakers associated with mumblecore. Jenkins’s film has done remarkably well for a low-budget indie film that was shot on digital video for less than $14,000. Not only did the film play on the festival circuit, including Toronto, but it was picked up for distribution by IFC. Somewhat surprisingly, it managed to gross over a $100,000 at the box office, and has already been released on DVD. In case you don’t know, for an independent film, that’s considered to be “success” these days. Even so, Medicine for Melancholy is still not on most viewers’ radar, which is a pity because it’s one of the standout indie films of the past year.