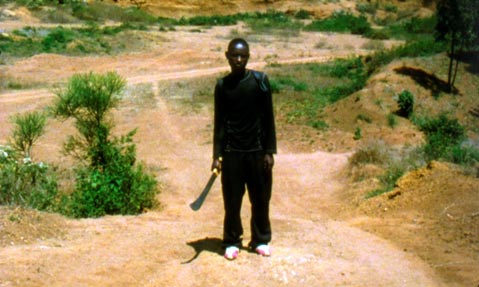 We tend to associate one strand of American independent cinema with regionalism. Jeff Nichols’s Shotgun Stories, Lance Hammer’s Ballast, Kelly Reichardt’s Wendy and Lucy, Ramin Bahrani’s Goodbye Solo, and Barry Jenkins’s Medicine for Melancholy serve as some recent examples. But a new trend rooted in globalism seems to be developing. Chris Smith made The Pool in India, So Yong Kim set Treeless Mountain in Korea, and Lee Isaac Chung shot Munyurangabo (2009) in, of all places, Rwanda. That Kim would locate her semi-autobiographical Treeless Mountain in Korea, where she grew up as a child, makes sense, while Chris Smith’s choice to transpose his story from Iowa to Goa, India is surprising, but the story is somewhat universal in scope. Yet the decision of Brooklyn-based filmmaker Lee Isaac Chung to make Munyurangabo in Rwanda, on the other hand, seems to take it to another level. Munyurangabo doesn’t sound like it could possibly be an American indie film, yet it most certainly is one.

Chung, who is Korean-American, grew up in rural Arkansas, attended Yale and later film school at the University of Utah in Salt Lake City. He went to Rwanda where his wife worked as a volunteer at a Christian mission. Chung originally intended to teach a filmmaking workshop for kids there, but he subsequently decided the it would be more ambitious and educational to use the class to make a feature. He and his friend Samuel Anderson co-wrote a ten-page outline, and much of the film, especially the dialogue, wound up being improvised on location. The film was shot in a mere eleven days. The result is Munyurangabo, which premiered in the prestigious Un Certain Regard section at Cannes in 2007, as well as other major international film festivals around the world. Its rights were acquired by the subscription-based distributor Film Movement and it had a brief theatrical run at Anthology Film Archives only last May. It is now available on both VOD and DVD.

Munyurangabo tells the story of two young friends, Munyurangabo (Jeff Rutagengwa) and Sangwa (Eric Ndorunkundiye). The story begins on a foreboding note. While everyone is distracted by a fight involving two men, Ngabo (as Munyurangabo is nicknamed) steals a machete on the streets of the capital city of Kigali. He later envisions it covered with blood, which is rendered in a single uninterrupted camera movement from the bloodied machete to his face and back again. After the title credits, Chung shows Ngabo, dressed in black with red sneakers, in a frontal wide shot as he pensively stares at the machete. Sangwa enters the frame from screen left and leans against the wall. He asks Ngabo, “Did you finish packing?” Ngabo stares at him and nods. The screen cuts to black. With spare economy – the stealing of the machete is conveyed in a ten brief shots – Chung manages to set up the story.

As we hear a song about people’s love for their country of Rwanda and the calamities that have befallen it – there is also written text that includes a biblical quote from Isaiah 51 – the two boys set out on a journey. On the way, they stop to visit Sangwa’s family, whom Sangwa hasn’t seen in three years. His mother (Narcicia Nyirabucyeye) is ecstatic that her runaway son has returned, but his father (Jean-Marie Nkurykiyinka) is not very forgiving. He chastises his son for shirking his responsibilities to his family and flat out tells him, “You should have been aborted.” The camera holds on Sangwa’s pained reaction. At twenty-two minutes, we learn that Ngabo plans to avenge the killing of his family in the genocide.

Sangwa’s parents take a disliking to Ngabo. He overhears Sangwa’s father tell his son, “That boy you are with, don’t you know he’s a Tutsi? Don’t you know Tutsis are nasty? They have put our people in submission now. Now I’m suffering because of them. They tried to put me in prison even though I’m old. And yet you walk with them?” At one point, when Ngabo spies the father nearby, he instinctively reaches for his machete. After Gwiza (Jean-Pierre Harerimana Mulomda), Sangwa’s childhood friend, mysteriously becomes ill, Ngabo asks if he can visit Gwiza, with whom he has become friends, mostly as a result of the boy’s ability to make Ngabo laugh by inventing funny stories about fictitious animals. Sangwa’s father, however, blames Ngabo for everything that has gone wrong lately, and his son for bringing Ngabo into their house.

After a festival of dancing, Ngabo tells Sangwa that he’s deeply offended by what the father said about him. Sangwa, who has finally reconciled with his father as a result of repairing a mud wall, informs Ngabo that he has decided to stay with his family. Ngabo tells Sangwa, whom he calls his only friend, “You have a family, a mother, and a father. You know why my life is like this? Why my life is hard? It’s because of your relatives. Because Hutus killed my family. My life would have been better without them.” Ngabo suddenly points his finger at Sangwa and says something we’ve suspected, which leads Sangwa to break off their friendship.

Ngabo retaliates by squealing on Sangwa, causing Sangwa’s father to turn on his son again. In terms of characterization, we are often only able to understand the motivation of characters through inference. Why did Sangwa run away from his family? We learn from Gwiza that Sangwa’s father is no longer drinking. Later, Ngabo has a conversation with Sangwa in which he wonders, if Sangwa’s father is “bad,” why he’s working so hard to try and please him. Why would Sangwa’s father beat Sangwa and expel him away solely on the basis of what Ngabo tells them (even if he might be drunk)? After he gets banished by his family, Sangwa tries to make up with Ngabo, but, once crossed, Ngabo no longer wants to have anything to do with him either, causing the friends to part ways.

Although the title of the film is Munyurangabo and we fully expect it to be his story, after the opening scenes, the film focuses more on Sangwa, while Ngabo recedes into the background. Once Ngabo ditches Sangwa at roughly 70 minutes, the narrative switches back to his now solitary journey, in which, in voiceover, he goes deep into his memory and recalls details of the genocide, while we see subjective shots of the landscape as he treks back home. In my book on screenwriting, I have a chapter about shifting protagonists (Fargo does this, as does Psycho, the film the Coen brothers reference), so such a strategy is by no means unprecedented. Chung has discussed the fact that he deliberately employed a split narrative, but it’s not clear why. One possible explanation is that the structure allows him to present both sides of the story or two different perspectives on what’s taking place.

The film takes another unexpected detour in the third act when Ngabo stops to eat at a café. Another patron (Edouard B. Uwayo) sees his machete. The guy comes over, announces he’s a poet and indicates that he will be reciting his poem the next day to commemorate National Liberation Day. The poet then recites his poem while looking directly into the camera. Entitled “Liberation is a Journey,” the poem is simply astonishing. Even as a pure sound poem (spoken in the Kinyarwandan language), it has the most unbelievable cadence I’ve ever heard. The poet proceeds to tell the story of what happened in Rwanda, addresses injustice, and what needs to change in the country. We originally think his poem will be brief, but it goes on for over six minutes – so long that it begins to feel surreal.

One might assume that such an epic poem would have an immediate impact on Ngabo, but right after this strange interlude he stands with his machete in a wide shot and then moves move forward toward his family’s dwelling. From behind, we watch as he slowly approaches the building and hear the sounds of cows and chickens in the background. He goes around the building, enters cautiously, and makes a discovery. After his father appears to him in a vision and he dreams of Sangwa, Ngabo’s journey of revenge leads to a final image of hope and redemption. The shot happens so quickly and it is so subtle and unexpected, you might miss it.

Munyurangabo represents an amazing accomplishment on Lee Isaac Chung’s part. Working from only a brief outline with an inexperienced and indigenous crew, he was forced to improvise while on location and had to communicate with his nonprofessional actors through translators. Chung chose to shoot his elliptical narrative on 16mm film rather than digital video for both aesthetic and practical purposes. He uses long takes, relies on natural light, and stages most of his scenes outdoors. Chung doesn’t try to hide his stylistic influences, which range from Ozu to the Dardenne brothers and Terrence Malick. He embeds his characters within the landscape through his inspired framing of shots and camera movement – it’s simply impossible to look at the terrain of Rwanda without being reminded about what happened there.

Although Munyurangabo ostensibly focuses on the lives and relationship of its teenage characters, Ngabo and Sangwa, as we discover, the film is really a parable about an impoverished land that is still very much haunted by ghosts.