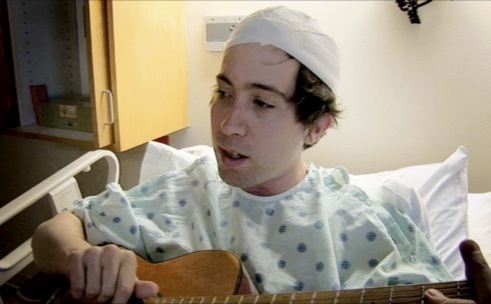 It’s sometimes hard to understand why some mediocre films get all the buzz, and some great ones don’t. For the life of me, I can’t explain why Bob Byington’s Harmony and Me (2009) received its theatrical run at the Museum of Modern Art rather than a commercial theater, and to my knowledge, still hasn’t as yet found a distributor. Yeah, life ain’t fair – of course, I know that. Yet if I were to pick one indie film of the past year that I would jump at the chance to see over and over again, it would be Harmony and Me, a film in which every single scene manages to work, while being woven into an intricate medley of idiosyncratic humor. And I say this as someone who generally shuns comedies for the simple reason that most of them aren’t very funny.

Variety, in a favorable review, called it “a mumblecore film without the mumble.” That sounds a bit like calling something a chocolate bar without chocolate or a milk shake without milk, so I’m not exactly sure what it means. In any case, like the Variety reviewer, other people might also assume this film to be another example of mumblecore. After all, Harmony and Me features Justin Rice, the talented front man of the Brooklyn band Bishop Allen, who was the lead actor in Andrew Bujalski’s Mutual Appreciation, (and who, like Benjamin Button, seems to grow younger and younger with each passing year). The film is also set in Austin, Texas, edited by Frank Ross, and is even about relationships involving twentysomethings.

Byington, however, has tried to distance himself from mumblecore. When asked how he felt about the association, Byington told Karina Longworth in New York Magazine, “I like the humor in Broadcast News more than, say . . . I don’t know how to say more without seeming like I’m being dismissive of other movies. I’m very interested in watching how some of the mumblecore directors continue. I certainly don’t consider myself one of them. I understand the connection, but the movie and I are interested in other things.” In other words, Byington is politely suggesting that his real interests lie in comedy.

What distinguishes Harmony and Me is Byington’s absolute command of comic timing, which I suspect is also the result of careful scripting. One of my favorite scenes in Mutual Appreciation is the one where a drunken Alan (played by Rice) stumbles into party and the three women in wigs convince him to dress in drag. Rice’s comic timing stands out in that particular scene, but then again he’s playing a rock-musician character who at least bears some resemblance to himself. Yet I didn’t find this quality at all evident in Jonathan Blitstein’s Let Them Chirp Awhile, in which Rice was cast as a Woody Allen wannabe.

After seeing Harmony and Me, I’m convinced that Byington deserves much of the credit for Rice’s outstanding performance here, in which his deadpan delivery and reactions are totally spot on. He’s not playing himself, but a hapless loser with a broken heart, who can’t seem to get past it. As Byington puts it in the same interview, “In Harmony, it’s like Justin’s walking around with a broken record, asking people to listen to it. ‘Please listen to my broken record.’ Our worst nightmare is having to listen to our friends tell us about their stupid breakup. There is a way to make that situation funny.”

Harmony and Me begins with a voiceover quote from the lyrics of a Madonna song. Harmony says, “Something in your eyes is making such a fool of me.” It takes all of eight shots to move from the romantic bliss of Harmony and his girlfriend Jessica (Kristen Tucker, the film’s producer) to Harmony lying on a couch. We assume he’s in a therapy session. Harmony says, “I can’t seem to . . . I walk around with this idea that I want and can’t be happy without some version of, I don’t know, possessing her? Of having her love me in a way she’s not even wired for, not even set up to do.”

As the camera holds on Harmony muttering to himself, a voice asks, “Can I help you?” Byington cuts to a wide shot and the back of a proprietor and what appears to be an empty furniture store. The film cuts to black. Justin sits talking on a cell phone to one of Jessica’s friends, who claims that Jessica describes him as a loser. The revelation is painful. We learn in the next scene – once again involving a cell phone conversation with the same person – that Jessica had already started grieving over the loss while still in the relationship, which has given her a big head start over poor Harmony.

As a form of therapy, Harmony begins taking piano lessons. In voiceover, he suggests, “Lately, the way I shake people’s hands feels spasmodic . . . like I have a hand buzzer. I can’t find any rhythm.” What follows is a series of episodic skits. We see him at work, with his mother (Margie Beegle) and his impish younger brother, Wes (Bishop Allen bassist, Keith Poulson). Brad (Don Herminghaus), his boss at the tech company where he works, has only a day to live and his mother turns out to have lung cancer, but Harmony is too fixated on his own broken heart for these things to register.

Harmony’s tries to get sympathy from his family, but his mother suggests that next time he should “find one that can move her arms and legs,” and Wes can only muster snide remarks. After a family tennis match, Harmony concludes, “I’m pretty sure I grew up with limited access to mental health. My older brother, who was supposed to be a mentor in lieu of our deceased father was deficient. Suffice it to say that he didn’t pick up the slack.” His older brother Jim (Bob Byington) is the type who insists that Harmony remove his shoes before entering his house. He’s about to get married, and, at least according to Harmony, has just bought the wrong-colored tan suit.

Harmony’s friends are no more sympathetic or understanding than his family. Carlos (Kevin Corrigan) calls Jessica “dull” and won’t admit she’s pretty. Another, Prince Valiant (Nick Holden), puts his arm around Harmony and suggests that his uptight response is homophobic. Harmony insists that it’s a personal-space issue, while his friend claims it’s cultural. To be more cruel, the friend rates Jessica only an 8 on a 10-scale. Still another one, Mean Man Mike (filmmaker Alex Karpovsky) who’s unhappily married to a woman named Milius (Baseera Khan), takes Harmony to a Chinese acupuncturist. After the friend uses a “stagnant pond” metaphor to describe his problem, Harmony explains to the acupuncturist, “She broke my heart, but she’s still at it. She hasn’t finished the job. She’s breaking my heart.” He continues, “My heart is a snack. She’s like a bear with a fish in its paw.”

Brad seems to recuperate miraculously. He ridicules the heart-shaped locket containing Jessica’s picture that Harmony wears around his neck, and also suggest to a female employee that he’s only interested in underage women. When Harmony tells Mean Man Mike that his boss implied that his chain and locket  made him look gay, the friend concurs that you only see such jewelry on either black people or gay people. When Harmony runs into Jessica on an elevator, she comments on the fact that his shirt and sweater and shoes match, and then laughs and remarks, “It’s cute.” Harmony demands his sweatshirt back, while she reminds him he still has her yoga mat. He also runs into a neighbor, Natasha (Allison Latta), who’s obsessed with her boobs and seems to have a crush on him.

Music becomes a means for Harmony to work out his emotional turmoil and also communicate with his friends, including Mean Man Mike and Carlos. The piano teacher (Jerm Pollet) claims, “No one wins in love.” He realizes his wife is no longer interested in him, but a lawyer who happens to make a lot more money. To him, it’s not personal, but attributable to a change in taste – like preferring crème brûlée to crab cakes.

One of the funniest and most uplifting scenes occurs at Jim’s wedding, where Harmony is brought up by the band to sing, while the Wedding Singer (Austin musician Bob Schneider) checks out the bride, who’s six-months pregnant, and Wes munches on cake. Harmony wanders down to where the Wedding Singer is practicing a song on the piano and gets tutored in how to play it. This is intercut with the Wedding Singer who leads the bride onto the dance floor and sings an exuberant rendition of “Changing Your Mind” to her on bended knee, with his head pressed against her extended belly. Embarrassed, she looks over, and the ensuing camera movement over to Jim and family at the table is as hilarious as you might expect.

As the movie progresses, Jessica takes up with the boss’s son Matt (Pat Healy), whom Harmony regards as “pretty clearly an imbecile.” Harmony goes bowling on his birthday with Matt and Brad, which ends disastrously. Harmony attends Brad’s funeral, where he delivers a eulogy that gets him fired, and has an affair with Natasha that turns out badly, and references There’s Something About Mary (a film I could never watch twice). After she complains that the sex was bad while standing on the balcony in her undies, Harmony responds from the parking lot, “Are you sure you shouldn’t just be thankful that I don’t murder you?” As he walks away, he tries to turn his words into lyrics for a song.

When Harmony’s forced to borrow money from Jim, his brother suggests he values his tabby cat far more than him. Harmony later returns home to find Jessica who’s returning his sweatshirt and wants her yoga mat. When Harmony asks her inside, she suggests that he’s like a character in a movie that you don’t care about, and, after a deep breath, tells him, “I just know that I’m not interested in you.”

Harmony burns Jessica’s pink yoga mat. In a self-destructive gesture – the idea stems from an incident involving Natasha and her dog – Harmony ends up in the hospital, where he spends a week in a coma. It’s here that Byington’s mosaic-like structure becomes fully evident. Most directors would try to pare down the number of characters, especially in such a sequence, but Byington creates a series of short jokes involving Harmony’s mother and Wes, and various friends who turn up to visit Harmony there.

Once Harmony wakes up from his coma and Jessica finally shows up, everyone clears out of the room. After she leaves, everyone returns to his bedside and Harmony, a white bandage still wrapped around his head, ends up playing the song he’s been working on for the entire film, called “The Finishing Touches.” Aren’t broken hearts the staple of most pop songs? Byington’s brilliance is the clever way he works music seamlessly into the film, transforming Harmony’s broken record into a brand new song.

Harmony and Me will play at the Wisconsin Film Festival (April 15-18) this spring. You can also check out the film’s Web site for other screenings. Like most comedies, it’s much funnier to see it with an audience.