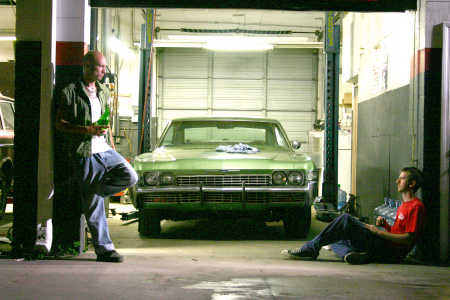 Chris Fuller’s Gummo-inspired Loren Cass, is easily the most controversial indie film of the past year – a film so dark that it somehow makes even Antichrist seem upbeat by comparison. Originally completed in 2007, the film finally had a limited theatrical release this past summer and recently became available on DVD from Kino International. Loren Cass received a number of favorable reviews in the press, most notably a very glowing one from Nathan Lee in the New York Times. Like Korine’s film, however, the targeted audience for Loren Cass is certainly not mainstream viewers, who will no doubt find its subject matter far too disturbing and depressing.

The connection to Harmony Korine is appropriate for a number of reasons. Fuller cast Jacob Reynolds, who played Solomon in Gummo, for a cameo appearance as the Suicide Kid. But beyond that, Fuller has created a truly provocative film that attempts to push beyond Korine’s fictional saga by presenting an uncompromising view of youthful anomie and skinhead culture. Like Gummo, Fuller employs an associational structure to weave together an evocative mood-piece that captures the angst and despair among the alienated young people of St. Petersburg, Florida. He depicts his home town as a vision of hell.

Lile Korine, Fuller often disguises his sources and appears to be more interested in individual scenes than in the larger narrative. Indeed he uses a romantic plotline as something of a smokescreen in order to disguise to his real intentions. It’s not, as some folks on the Internet suggest, that Fuller doesn’t know or understand how to make a narrative. A film has to be judged by the criteria it establishes. For someone to evaluate Loren Cass on strictly narrative terms or on the basis of classical narration is like criticizing a poem for not having a plot.

Loren Cass begins with music over black leader, followed by a shot of a road with buildings in the background. A raspy voiceover, reminiscent of Solomon’s opening monologue about the tornado in Gummo, says, “Back in 1997 . . . ” Subsequent sequences, involving virtually no dialogue, introduce us to the film’s three main characters: a garage mechanic named Cale (Fuller himself under a pseudonym), his heavily-tattooed punk friend, Jason (Travis Maynard), who proceeds to lie boldly in the middle of the street as if begging to be run over, and a promiscuous blond-haired waitress, Nicole (Kayla Tabish).

In a sun-drenched wide shot, Nicole slips out of bed and gets dressed. The covers slowly start to move, and a black man becomes visible. She mumbles something to him, passes her parents without speaking, and then gets into a red convertible. Cale’s car stops in front of the still-prone Jason. As they drive away, Nicole’s car follows them down the street. The two vehicles pull side-by-side at a stoplight and when the light changes, they disappear from the frame, only to reappear in the parking lot of a school.

After a montage of street signs and empty corridors, lockers, a stairwell, and finally a men’s bathroom, feet can be seen underneath the front toilet stall. Fuller cuts to a closeup of male hands loading five bullets into the cylinder of a revolver. As Cale and Jason later leave the nearly empty parking lot, they hurl an empty beer bottle at the remaining vehicle and we hear the sound of shattered glass. A guy races out of the building, gets in the van, and gives chase. At a stop sign, a black man jumps out and begins to pummel Jason through the open car window, but Cale stomps the guy with his foot as the screen cuts to black.

The film’s opening takes nearly ten-and-a-half minutes. Other than sounds of a trumpet and Nicole’s mumbled line of dialogue, Fuller relies entirely on visual storytelling. Yet Loren Cass has already managed to evoke an ominous mood and create expectations that something really terrible is going to happen, as evidenced by the loading of the gun, the broken glass, and the stomping of a black man. As Jason walks toward us at night, we hear voiceover narration: “St. Petersburg – a dirty, dirty town, by a dirty, dirty sea because the soul of the railroad is the chain gang . . . ”

Fuller, who began Loren Cass as a teenager and completed it when he was twenty-one – indie films usually rely on these kinds of back stories – teases the viewer with bits of an elliptical narrative. But mostly he relies on the technique of collage. Fuller uses passages of black leader and assorted verbal passages – rants with four-letter words and drunken songs by gutter punks, fiery revolutionary rhetoric by Omali Yeshitela, readings by poet Charles Bukowski, and allusions to Nelson Algren, Anthony Burgess’s A Clockwork Orange, and the beat writer Jack Kerouac, who lived there. He also includes documentary television footage of the 1996 race riots in St. Petersburg.

In addition, there are more racially motivated fist fights, sequences of gutter punks combing through the trash and creating a makeshift shelter out of wooden skids, or pulling shopping cars with pickup trucks, or guzzling bottles of beer in the back of them until they get busted by the “pigs.” They throw insane tantrums at invisible adversaries and beer bottles at passing cars, or they attack trash cans with their bare fists (which references the infamous wrestling match with the chair in Gummo). Fuller shows footage of a hardcore concert, in which a shot of the jumping boots of punks intercuts with footage of the race riot on TV and words of Yeshitela talking about armed resistance.

It takes a full twenty minutes before the two friends, Cale and Jason, ever speak a word to each other. At the heart of Loren Cass, however, is a romantic plotline involving Cale and Nicole At fifteen minutes, Nicole drives into the gas station with radiator problems. She later returns for her car, and, on the way out, asks Cale if he wants to get some dinner at the restaurant where she waits tables. The scene of them at the restaurant is notable for the fact that Fuller begins the scene by focusing on their legs and feet as they sit in a booth. Nicole eats, but Cale doesn’t touch his cheeseburger. Instead they just sit there in awkward silence for nearly two-and-a half minutes, before she scribbles a note on a piece of paper and and passes it to him.

The above scene is mostly handled through body gestures and reaction shots, but the ensuing dialogue, which occurs over the next minute, is cryptic beyond belief, especially because four of the six lines turn out to be questions.

CALE: I’m hanging in there. You?
NICOLE: I’ve seen better days.
CALE: Like?
NICOLE: Did you have a rough night?
He just shakes his head.
NICOLE (Cont.): So, you’re going to eat?
He makes a sound.
NICOLE: Let’s get out of here.

At her car, Nicole writes her phone number on Cale’s hand and splits.

Cale later calls Nicole and makes a date for the following night. In between, however, she gets picked up by a young customer (actually he’s not much of a customer – he only orders water) and has sex in the back seat of her car, which is conveyed behind the open car door by means of a jump cut. This is a film where shots of a pickup truck being towed – and the objects shuffling around in the back of it – are given equal weight to a scene that involves sex, which is part of the film’s extreme formal rigor.

We get more shots of feet when the two share the same restaurant booth on their date. Like Korine’s dialogue in Gummo, the exchange between Nicole and Cale is full of non-sequiturs, and once again involves more questions than coherent statements. Fuller actually uses their fractured dialogue as a means to depict his characters’ inability to communicate what’s going on inside them:

NICOLE: A few years ago my parents took me on this road trip. We went up the coast and rented a van. I hated it. We went by a “South of the Border.” You know that place?
CALE: Yeah, Carolina?
NICOLE: Yeah. I’m leaving soon. Not here, but more back home.
The two stare at each other.
CALE: That all you remember?
NICOLE: Motel . . .  headlights. You?
CALE: I went to Brooklyn once. (Pause).
He hands her a cassette tape.
CALE (Cont.): Listen to this when you can. (Pause) What’s your name?
NICOLE: Nicole.
CALE: You’re gonna go for a ride?

The film cuts to them sitting in the back of an empty bus. During the ride, which lasts over a minute-and-a-half, Nicole leans her head on his neck.

After a punk concert, Cale runs full-speed from his room through the streets. Nicole drives her car and inserts the cassette tape into the deck before she crashes into him. He flies up onto the hood of her car and gets thrown back into the street. Nicole gets out of her car and the film jumpcuts to them kissing in the headlights, and then silhouetted against the car. In the film’s most remarkable scene, Jason, while riding the bus at night, envisions himself sitting in an armchair. He suddenly bursts into flames, leaving him burnt to a crisp. In the same dream sequence, he imagines the aftermath of his death – a shot in the cemetery as someone jumps on his grave. As Jason walks home, he gets the shit beaten out of him, and is left a bloody mess. Once home, he dyes his sideburns with his blood.

At the three-quarter mark, Bukowski reads his poem, “The Last Days of the Suicide Kid” on the soundtrack and there’s a shot of the Suicide Kid (Reynolds), smoking a cigarette and then slugging from a bottle at a party. Cale and Nicole also show up and make love in the bedroom. After Jason leaves the party and goes to the Sunshine Skyway Bridge, where all the punks hang out, the Suicide Kid heads to the same place. As he drives there, we hear snippets of Budd Dwyer on the radio. When the Suicide Kid gets there, the horizontal stripes on his red shirt are filmed against the diagonal lines of the bridge. There’s a cut to a TV screen. Fuller shows the notorious television footage of Budd Dwyer (the Pennsylvania public official convicted of corruption in 1987), putting a gun to his mouth and then pulling the trigger during a press conference.

The horrific footage of Dwyer committing suicide serves as a visual shock, which was set up earlier by the use of synecdoche, namely the loading of the gun in the bathroom stall. The visceral impact of splicing the Dwyer footage into the film as a surrogate for the Suicide Kid’s death serves as the film’s most controversial aspect. It makes perfect sense given the fact that the entire film can seen as a suicide note, but at the same time you can argue that the “reality” of it somehow gets reduced to a chilling metaphor. Shortly after this, Jason will tattoo the enigmatic words “Loren Cass” on his arm, adding to the film’s opacity, before he overdoses on pills, and a voiceover negates everything that has gone before.