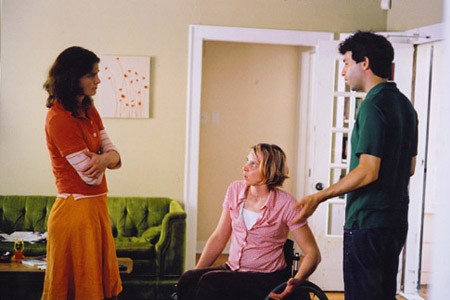 Andrew Bujalski’s much-anticipated third feature, Beeswax (2009), might appear to be about almost nothing at all, which is one of the risks of naturalism. I must confess that it took a second viewing for me to appreciate fully just how subtle and complex his new film really is. Beeswax explores the relationship between a pair of attractive twin sisters in Austin, Texas. Bujalski’s characters are older than in Funny Ha Ha (2005) and Mutual Appreciation (2006), and their problems are more substantive, but his focus still remains on the confounding mysteries of human communication.

Jeannie (Tilly Hatcher) runs a hip vintage shop called Storyville, while her roommate sister Lauren (Maggie Hatcher) is more of a free spirit, who perpetually seems to be searching for a job. As the film begins, Jeannie is embroiled in a conflict with her business partner, Amanda (Anne Dodge), while Maggie breaks up with her boyfriend for no apparent reason. The sisters are distinctly different. Perhaps because Jeannie is in a wheelchair, she protects her independence. This quality, combined with other traits of her personality, makes her something of control freak. Having a partner – romantic or business – presents a challenge for her (and the other party), despite her seemingly casual demeanor. Lauren is the opposite. She parties all night and then still seems to be up for an early morning game of soccer. But Lauren has her own demons, which are merely harder to detect. She’s flaky to a fault – losing her phone, forgetting to relay important messages, and not really being there for her sister or anyone else.

Jeannie’s problems with Amanda cause her to reconnect with an old flame named Merrill (filmmaker Alex Karpovsky, who’s really quite a good actor), but it largely has to do with the fact that he’s a law student, who is about to take his bar exam. Jeannie doesn’t mean to exploit Merrill. Like all people who use others, she just happens to get re-involved with him when she needs him the most, even though she refuses to acknowledge him as her boyfriend. Merrill is well-aware of Jeannie’s motives, but he accepts the dynamic of the relationship because it also suits his own needs. Jeannie’s legal problems at the boutique are a welcome distraction from his bar exam, and Merrill has a tendency to function better in “crisis mode.” Not much actually happens in the film, but Beeswax nevertheless has a deceptively intricate plot. Lauren applies for a job, but the interviewer turns out to be the brother of the guy she’s just dumped. Of course, she doesn’t get the position – at least not initially. But when someone else backs out of teaching in Nairobi, it gets offered to her. Whether or not she’ll go is another matter altogether.

At the center of the film is the dispute between Jeannie and Amanda over the business, along with the threat of a messy lawsuit. As the film opens, a new employee Corinne (Katy O’Connor) turns up at the store. She’s been hired by Amanda, who hasn’t bothered to tell Jeannie. That alone is revealing of the strained relationship between Jeannie and Amanda. Like Carol White in Todd Haynes’s Safe, Corinne has the annoying habit of turning every statement into a question. You can tell that she grates on Jeannie’s nerves, almost from the moment she first opens her mouth. At one point, she asks whether it’s okay to put up fliers in the store about a political demonstration. Jeannie is concerned that if something happens at the demonstration – and Corinne gets busted – she won’t be able to open the store the next morning. Corinne rightly suggests she also could get hit by a car, but their conversation reveals that the two of them, for all practical purposes, inhabit alternate universes. Corinne actually doesn’t get hit by a car or get busted at the political rally, but she does end up having an unexplained meltdown.

Even more inexplicable is the fact that Lauren chooses to withhold crucial financial information from Jeannie, namely, that her mother’s friend Sally (SXSW film festival producer Janet Pierson) really wants to help out. Maybe it has to do with the need of twins to keep secrets from each other just to maintain their own separate identities. It actually works both ways. Jeannie initially doesn’t want Lauren to know that Merrill has slept over. He gets caught and lies to Lauren that he was merely retrieving his cell phone, but Lauren makes it obvious that she doesn’t quite believe him. Lauren asks Merrill to go with her to play a game of soccer. He almost does, but then changes his mind at the last minute. In a sense, virtually every scene begins to feel like an open question.

We never know why Lauren won’t tell Jeannie about something so important, especially when they take a trip to talk to a potential investor, played by film director Bob Byington, whose disheveled appearance makes him look like he’s just crawled out from under a rock. His eyes keep darting between Merrill and Jeannie in the scene before he simply tells Jeannie once Merrill is dispatched to get beverages, “I’d like to be your guy, but I don’t know if I’m your guy.” Both Karpovsky and Byington appear in Byington’s Austin-based indie Harmony and Me. The two are actually much funnier in that film, which is a comedy that relies on very brief scenes, precise comic timing, and a wider range of emotional peaks and valleys.

Bujalski’s scenes in Beeswax, on the other hand, are much longer. They have a very methodical quality, as if guided by some inner metronome that controls the carefully-modulated pace and tempo that has become something of a stylistic trait of Bujalski’s work. As in the earlier Bujalski films, conversations don’t follow the usual structure and conventions of movie dialogue, but appear to meander in ways that often appear to confuse even the participants themselves. Bujalski has become the master of circumlocution and indirection. His characters get so lost in the labyrinths of their own words and language itself that they often say the opposite of what they mean or intend. Their unconscious slippages turn out to be funny as well as embarrassing. The actual behavior of Bujalski’s characters is equally unpredictable, suggesting that, deep-down, human beings are an utter maze of baffling contradictions.

Bujalski makes us acutely aware of the fact that attempts at humor often carry the greatest personal risks. A wonderful example of this occurs in a scene where Lauren strolls in and tells Jeannie and Merrill that, among other things, she’s just learned that a high-school boyfriend has died:

LAUREN: I’ve gotta pee and go to bed. I do have some stories to tell you, the saddest and quickest of which is that A.C. told me that Daniel had died. Some heart thing, I don’t know, some kind of unexpected heart failure, or maybe drug-related, maybe not.
JEANNIE (softly): Jesus . . .
LAUREN: So . . .  (To MERRILL) This is my first boyfriend from high school.
MERRILL: Oh, I’m sorry.
JEANNIE: I’ve never . . . I’ve never kissed a dead guy.
MERRILL: Maybe if you were a better girlfriend in high school, he’d still be alive today.
Jeannie, lying on the couch, winces, then laughs.
LAUREN: Maybe so.
MERRILL: That sounded horrible. That came out totally wrong. I’m sorry.
LAUREN: I don’t know . . .
MERRILL: Why would I say that? That’s terrible.
Lauren excuses herself.
LAUREN: I’m gonna head to bed.
MERRILL: Goodnight, Lauren . . .  (To JEANNIE) In my mind, it sounded so different than the way it came out. It sounded hilarious. It came out so not hilarious.
JEANNIE: Yeah, I guess not. No.
MERRILL: No, maybe not. That was terrible.
JEANNIE: You didn’t know Daniel.
MERRILL: I didn’t know Daniel. That’s really no excuse.

Lauren, however, does know Daniel, yet she appears to have no emotional response either, which says a lot about her character.

What distinguishes Bujalski from the cohort of filmmakers with whom he’s often associated is his strength as a screenwriter. In an  interview with Livia Bloom in cinema scope, Bujalski explains, “I did realize that I think I’m an auditory sort of writer. For me, writing starts from hearing voices in my head. My films are quite dialogue-heavy, and I think maybe that’s partially because I hear them first.” This is hardly surprising. Bujalski has always been considered a character-based director rather than a visual storyteller. Or as he later puts it, “I feel like I’m running toward the images, and the way I’m getting there is by listening to the words.”

Yet Beeswax does represent a significant advance in terms of visual style. The film opens with vintage dinner plates of numbers being removed from the frame, which is a clever way of suggesting the countdown leader on a film. The cluttered compositions of Storyville create a striking contrast to the more spare framings inside Jeannie and Lauren’s place. Jeannie uses her wheelchair to traverse the space of the vintage store, making the viewer self-consciously aware of the camera’s tracking shots to follow her, with wooden artist mannequins suggesting the human anatomy amidst the lime and peach color-scheme and golden light. But the tranquility of this image will soon be shattered by a loud knock at the door, which will introduce the ensuing turmoil.

In discussing the fact that his characters bring such radically different perspectives to events in Beeswax, Bujalski relates it to his own situation in making independent rather than mainstream films. He told the interviewer on the auteurs: “I think it’s probably deeply ingrained in all of the work I’ve done. Certainly the Jeannie and Amanda conflict in Beeswax is a question of two people who look at the world differently and get torn apart by that. They can’t figure out how the other one could possibly see the world. My career is about that. Why aren’t as many people going to see Beeswax as are going to see Avatar? Of course it doesn’t make sense to me: I don’t share the worldview that would produce that mass opinion. I’m up against that every day.”