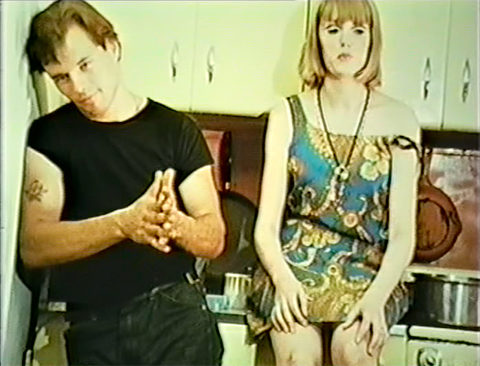 The motorcyclist has been a figure of rebellion in American popular culture in the Post-Second World War era, as exemplified by Marlon Brando’s role in The Wild One (1953). Kenneth Anger’s Scorpio Rising (1964), a film that strongly influenced Andy Warhol, focuses on the image of the motorcyclist and uses montage editing to create connections between a gang of motorcyclists, Christianity, and Nazi imagery. The film is about how leaders of each of the three groups use ritual to create a death cult. A motorcycle also features prominently in two other Andy Warhol films, notably the unfinished Batman Dracula and Couch. What no doubt attracted Warhol to the subject is the way the figure of the motorcyclist functions as an icon of both masculinity and gay desire. In Bike Boy (1967-68), Warhol cleverly deconstructs the power of this iconic image through his extended portrait of a biker named Joe Spencer.

Bike Boy begins with a close-up of Spencer’s face. In a series of strobe cuts that focus mostly on his muscular upper torso and on various parts of his body, we watch Joe take an extended shower. While little attention has been paid to Warhol’s use of color in his films, Joe is bathed in warm golden light against a background of black shower tiles. Spencer continually looks offscreen for some sort of direction. He’s obviously soaped up the various parts of his body and rinsed under the shower head numerous times already, but Spencer obviously doesn’t have a clue about Warhol’s desire to make his naked body the object of the camera’s gaze.

Joe Spencer has been set up beforehand. The shower scene goes on for an interminable length of time, the clothing salesmen treat him as a comic figure, and Ed Hood, playing the role of friend and confidant, gets Joe to reveal a side of him that most people wouldn’t want to know. It’s not a pretty picture. The scene with Ingrid Superstar in the kitchen is an obvious setup as well. Joe stands there, leaning against the wall and smoking a cigarette, as he strikes a Marlon Brando-like pose for the camera while she exposes her naked breasts behind him. Brigid Berlin goes right to the heart of the matter by calling Joe a “faggot.” Brigid ridicules his working-class accent and corrects his pronunciation of various words. Joe is no match for the verbal dexterity of either Brigid or Viva.

The scene with Viva is by far the longest in the film. Joe finds her more attractive than Brigid, whom he repeatedly claims isn’t his type and doesn’t turn him on. He seems far more interested in the prospect of making it with Viva, who calls him on his clichéd tattoos, especially the swastika, and his morbid obsession with death symbols. Of course, Viva, who subsequently would make an acting career out of pointing out men’s sexual inadequacies, is the perfect casting choice to puncture Joe Spencer’s grandiose sense of himself.

Joe claims that Viva’s not going to be able to handle what he’s going to do to her, but she challenges him. Joe’s description of having sex with women seems more appropriate to a butcher shop. He makes it sound as if he’s filleting a piece of meat, “Boy when I get them in bed, lay them out flat, you know. First I strip them down, you know. I lay them flat on that bed, you know. I go like that, you know, rub my hands, and (makes a sound) . . . right in bed I go.” Viva later tells him, “You sound like a meat cleaver.” He answers, “I’m just a saw.”

Despite his professed interest in having sex with Viva, Joe tries to evade it for as long as possible. The two of them eventually make out on the couch with their clothes on. Joe slips off his boots. After a smoke, Joe disrobes Viva, who lies naked, while Joe also strips. In various strobe cuts, Warhol has Spencer repeat the action of him pulling off his pants. Joe stands up naked. The action repeats. Joe keeps giving Viva a drag from his cigarette, but as he stands, his limp penis is obvious. He then sits down next to her on the couch. We see his naked body in the foreground of the shot, as Viva’s hands embrace him and she looks up at him and begins to laugh. When Joe asks why she’s laughing at him, Viva tells him, “I’m not laughing at you at all. . . I’m just laughing because you’re so funny.”

In a perverse way, Bike Boy lives up to its billing as an exploitation film. Brigid Berlin is absolutely right in her assessment of Joe – he’s “a lot of talk.” By film’s end, we’ve grown tired of Spencer’s macho bluster – his threats of violence, his revelations of bestiality, his misogyny, vulgarity, narcissism, bad politics, juvenile jokes, general stupidity, and inability to become sexually aroused by a naked woman. Warhol initially presents us with a sexy, muscular motorcyclist, but he deflates this mythic figure, as we watch Joe turn gradually into an object of ridicule.

Note: For a detailed analysis of Bike Boy and other Warhol films, please see my book The Black Hole of the Camera: The Films of Andy Warhol (University of California Press, 2012).