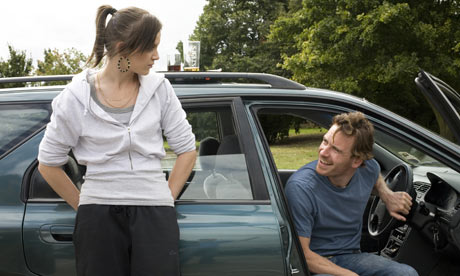 Andrea Arnold’s disturbing second feature, Fish Tank (2009), tells the story of a disaffected fifteen-year-old girl named Mia, who’s stuck in a dead-end life. She lives with her single mom, Joanne (Kierston Wareing), who constantly parties and drinks too much, and her younger sister, Tyler (Rebecca Griffiths), in a housing project in Britain. Brilliantly played by eighteen-year-old non-professional actress, Katie Jarvis, Mia is full of pent-up adolescent anger. Mia and her mother are in a state of open warfare with each other. Their hostile relationship consists not only of physical abuse, but they continually trade expletive-laced insults and engage in a series of shouting matches. Joanne screams at Mia, “What’s wrong with you?” Mia snaps back, “You’re what’s wrong with me!” Even the potty-mouthed Tyler (Rebecca Griffiths) has nothing nice to say, completing this portrait of a dysfunctional family.

Mia’s sole claim to an identity is that she listens to black rap music and fancies herself a break dancer. Early on, when Mia sees a group of neighborhood girls dancing in formation, she ends up viciously head-butting one of them as they argue. She also tries to unchain an old white pony from a fenced-in area of tattered mobile homes underneath the highway. Because the horse must seem to her like a metaphor for her own fate, Mia doesn’t give up easily in her desire to free the animal. After she returns with a hammer, Mia gets roughed up by some  guys. Even though she fights back with all her might, they cop free feels as she struggles. Mia eventually strikes up a relationship with a grease-monkey named Billy (Harry Treadaway), whom she helps steal a car-part from a junkyard.

But it’s not her relationship with Billy that becomes the film’s focal point, but rather the one she develops with her mother’s new boyfriend, Connor (Michael Fassbender). Almost from the moment Mia bumps into the handsome shirtless older man in her kitchen one morning, we sense something begin to percolate under her otherwise opaque surface. He comments, “You dance like a black. That’s a compliment.” Mia’s response is antagonism, but she nevertheless repositions herself to stare at his muscular back as he disappears up the stairs. Mia rifles through his wallet and steals some money afterward. Connor appears to be reasonably nice. He eventually comes to provide a welcome contrast to the strained non-relationship Mia has with her mom. Connor gradually takes an interest in Mia. He tries to build up her self-confidence, encourages her to enter an audition for dancers at a club, and even lends her his video camera to document her dance moves.

The boundary in their relationship becomes blurred almost from the beginning. When Mia steals a bottle of booze at one of her mother’s drunken parties and later passes out, Connor carries her up to bed, removes her clothes, and places a blanket over her. At a family outing to a lake, Connor manages to coax Mia, who can’t swim, into the water, where he catches a fish with his bare hands. After Mia injures her foot on a rock, Connor attends to her wound. He tells her to jump on his back as they head to the car. As Connor breathes heavily under her weight, Mia rests her face close to his. The two dance together in the parking lot afterward. The inevitable occurs when Connor brings her drunken mom home from the pub one night, and the he and Mia end up on the sofa together. From here, the plot takes a number of twists and turns and reversals, though I managed to predict most of what transpires. Frankly, it doesn’t much matter – the film will keep you riveted. But if I were to criticize Fish Tank (and I’m very reluctant to), it would be on the basis of its somewhat conventional plotting.

American manual writers have been spreading their screenwriting gospel across several continents now. Most affected are the national development boards that decide which films will receive government funding. Fish Tank received National Lottery Funds, so I can’t necessarily blame Arnold for the type of tight plotting she employs. It easily could be based on reader reports. For a discussion of this, I recommend that you read Kathryn Millard’s excellent article in the first Journal of Screenwriting. She writes, “Many development processes simply shape screenplays to pre-existing templates so that the distinctiveness of works can be gradually eroded, assessment by assessment, draft by draft.”

Everything else about Arnold’s Fish Tank is otherwise distinctive, especially her complex characterization. Roger Ebert writes, “Some reviews call Connor a pedophile. I think he’s more of an immoral opportunist.” The distinction amounts to splitting hairs. Does Connor take up with the mother to target Mia? No, I don’t believe so. But the film provides an almost textbook example of “grooming” – how an older man, such as Connor, sets up someone underage in order to exploit them. I find what he says to Mia in the heat of passion to be the most revealing aspect of his character, and Arnold subsequently exposes additional layers of deception. A poor neighborhood is a perfect playground for such a predatory character, who’s clearly slumming, even in striking up a relationship with Mia’s mother. Michael Fassbender does a masterful job of balancing the inherent contradictions of Connor’s character by creating just enough ambiguity to keep viewers off-balance.

It is Jarvis’s portrayal of Mia, however, that really stands out. Her feral intensity makes the screen crackle with raw energy – it’s no accident that she identifies with tigers – and serves to mask her vulnerability, confusion, and loneliness. Joanne is about to have Mia sent away, so the teenager has little to lose in running from the social worker. What she does with Connor amounts to a form of revenge, but, of course, it’s ultimately on herself. Arnold’s hand-held, highly mobile camera (the film’s cinematography is by Robbie Ryan) captures the kitchen-sink realism of the drab block buildings of the housing project and the desolate surrounding landscape. It’s no wonder that both the adults and kids drink anything that will numb the pain of their pathetic lives. Fish Tank is not nearly as depressing as it sounds. This extraordinary British independent film contains several scenes of such emotional power that days later I still can’t get them out of my mind.

Andrea Arnold’s Fish Tank won a well-deserved Jury Award at Cannes last May. It is being distributed by IFC both on VOD and in theaters. It opens at Sundance Cinemas Madison this Friday, April 9.