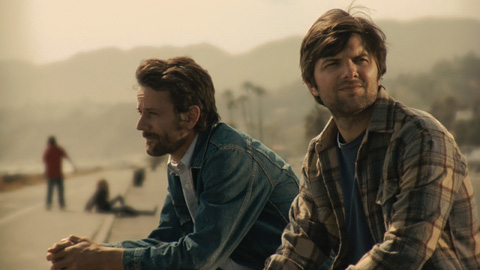 Matthew Bissonnette’s Passenger Side, a Canadian indie feature that played at the Wisconsin Film Festival last week, is a road movie that stays within very narrow parameters by mapping a specific place – the city of Los Angeles and vicinity – during the span of a single day.

The title of Passenger Side derives from a song by the band Wilco. The lyrics talk about not liking to sit on the passenger side while having to depend on someone to get around because of an impending court date. In Bissonnette’s film, Tobey (Joel Bissonnette) imposes on his older brother Michael (Adam Scott) to drive him around Los Angeles for reasons that are unclear initially. The two brothers, Canadian expatriates, present a study in contrasts. Michael is a novelist, while Tobey is an ex-junkie. Michael acts put upon and seems to resent Tobey for a host of reasons, including the fact that he’s forgotten that it’s his thirty-seventh birthday.

The film begins with the sound of a phone ringing for a long time. Michael, wearing black shorts and a tee shirt, finally answers by saying “Fuck you.” After arguing briefly with Tobey, he hangs up and proceeds to leave the phone off the hook as if he’s just encountered some aggressive telemarketer rather than his brother. He only agrees to chauffeur Tobey around after their mother intervenes.

Michael acts superior to Tobey, who is equally critical of Michael. As the film progresses, Tobey takes issue with the fact that Michael is sloppy, doesn’t show a lot of sympathy for other people, and hasn’t bothered to learn Spanish even though he’s been living in LA for years. Michael is also something of a Luddite, preferring a 1975 BMW, audio cassettes, a black and white TV set, print newspapers, pay phones, and listening to hockey games on the radio. In short, he seems to be someone who is desperately trying to hold onto the past.

The two brothers have a strained relationship and apparently haven’t seen each other in awhile. Much to Michael’s surprise, Tobey has read his brother’s novel recently, but doesn’t find the portrayal of either him or their mother very flattering. Michael insists the book is fiction and that the characterizations are exaggerated out of necessity. He claims to be writing a new novel, but it seems to be based on the events that are unfolding. Their interactions during the day consist of witty and acerbic banter, which, along with Tobey’s quest, provides the film’s forward momentum.

One of the film’s funnier scenes occurs when Tobey lets the drunken woman into their car against Michael’s protests. At one point she discusses the fact that she loves George Bush, who wasn’t a fag about doing what he had to do. Michael responds, “Are you talking about the war where we killed hundreds of thousands of people for no reason? Totally. You’re right. I’m sure glad he wasn’t a fag about that. It’s awesome.” Michael sarcastically suggests that she’s wasting her time in Los Angeles and that she should go back to Washington and start a political blog. The two brothers engage in a heated argument when Michael wants to ditch her at a coffee shop.

As the film progresses our perception of the two characters changes, as does their relationship to each other. Although Passenger Side relies on a very dialogue-driven screenplay, Bissonnette intersperses purely visual passages. He also integrates a fine music score put together by Mac McCaughan of the indie rock band Superchunk. Right after the Canadian-hating gas station attendant flips them the finger, for instance, there’s a moving shot from the car. We see an oil rig in the dark blue ocean, which serves as a focal point, while a sandy beach passes by in the foreground and we hear the song “Suzanne” by Canadian singer and songwriter Leonard Cohen.

Passenger Side is very much a well-acted character study and genre piece, but it succeeds largely due to a smart script that includes a number of unexpected twists and an ending that comes as a surprise (even if the clues have been there right along). Bissonnette sees his film as a throwback to1980s American indie cinema – to films by Jim Jarmusch, Hal Hartley, and Alex Cox – and indeed Passenger Side has a certain retro quality. He told an interviewer: “I enjoy these films as works of art, but I also have this idea that they stand as a sort of last gasp of romance and mystery in popular North American cinema, and I strongly believe that art, romance and mystery have a place in that arena, even in light of all evidence to the contrary.”