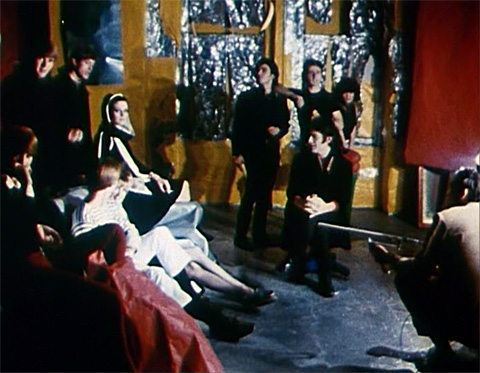 I learned the news about the passing of Callie Angell the other day. It made me sad, a feeling that has stayed with me days later. I knew Callie Angell from when I lived in NYC in the ’70s. I didn’t know her well, but we hung around in the same circles and I often ran into her at screenings at Anthology Film Archives where she worked for Jonas Mekas. As the curator of the Andy Warhol Film Project, she was responsible for the painstaking task of archiving all of Andy Warhol’s films.

I had a chance to chat with her after a gap of nearly thirty years at the Warhol Symposium, which was part of the “Other Voices, Other Rooms” exhibition at the Wexner Center for the Arts in the fall of 2008. Whenever factual questions related to the films arose at the symposium, everyone automatically would look to her. Callie always had the answer. It’s safe to say that Callie Angell knew more about Warhol’s films than anyone else in the world. Her work has provided the groundwork for all future Warhol scholarship. Her two slim catalogs on Warhol’s films at The Whitney Museum are seminal pieces. She wrote major articles in The Andy Warhol Museum and on Outer and Inner Space in Millennium Film Journal. Her encyclopedic book Andy Warhol Screen Tests is essential reading for anyone seriously interested in Warhol’s films.

I have referenced Callie in other blogs I’ve written on Warhol (please see here and here and here and here). There’s simply no way to avoid citing her. Jim Hoberman wrote a really nice memorial tribute about Callie in the Village Voice. I’m posting this piece about a little-known, but extremely important Warhol film Since (1966) – a work that I’m very fond of, but which no one ever seems to talk about – as my own personal tribute to her:

In his book POPism, Andy Warhol commented about the assassination of John F. Kennedy in 1963: “What bothered me was the way the television and radio were programming everyone to feel so sad. It seems like no matter how hard you tried, you couldn’t get away from the thing.” The Kennedys had captured the imagination of the public and become a modern American myth. Warhol would turn Jackie Kennedy into an iconic image of national grief in the numerous silkscreens that he made of her. Douglas Fogle also reminds us in ANDY WARHOL/ SUPERNOVA, “As television broadcasts would endlessly show footage from the 8mm film taken of the Kennedy assassination by Abraham Zapruder, Jackie herself would become the unwitting star of her very own film.” Another avant-garde filmmaker, Bruce Conner, made a film of Kennedy’s assassination, Report (1967), so perhaps it was inevitable that Warhol would also shoot his own film about this traumatic event, which had so transfixed the nation that no one could leave their television sets for several days.

Conner used pre-existing or found footage, such as that taken by Zapruder, to comment on mass media itself. To a certain extent, John F. Kennedy and Jackie Kennedy were media creations. They were sold to us just like appliances, which is why Warhol claimed not to see any differences between the commercials and other types of television programming, including the news. Warhol’s version of the Kennedy assassination, Since, turns out to be one of his most anarchic films. It’s almost as if the death of the president becomes directly related to the sense of utter chaos that seems to exist among the participants on the set. Like Tarzan and Jane Regained, Sort Of . . . (1963), Warhol’s Since seems so heavily reliant on improvisation that it appears at times to lack any sort of clear sense of direction (even though there’s evidence in the actual film of at least some type of written treatment).

In Since, Warhol inadvertently plays Abraham Zapruder by filming the media events that the actors stage for the camera. The film features Ondine, as Lyndon B. Johnson, in the lead role. Other cast members include: Ingrid Superstar (Lady Bird Johnson), Mary Woronov (John F. Kennedy), Susan Bottomly (Jackie Kennedy), and Richard Rheem (Texas Governor John Connally). Gerard Malanga and Ronnie Cutrone, the artist and one-time Warhol assistant, play a combination of Lee Harvey Oswald and Jack Ruby. There is no attempt at realism. A large, crumpled sheet of red construction paper becomes blood. A banana substitutes for a gun. The couch in the Factory serves as a car. Rather than evoking sadness, Since is rather comedic.

Warhol’s mobile camera moves around the set in a seemingly random fashion. Each assassination attempt results in some type of incomplete coverage – the shaky camera movement often misses the important action, but invariably ends up focusing on the blood. Inflatable Baby Ruth candy bars create their own commercials within the film. Indeed, Since, along with Soap Opera (1964), might be viewed as the Warhol films that relate most directly to Pop Art. It’s probably not a coincidence that both deal with Warhol’s fascination with television. In The Philosophy of Andy Warhol, Warhol comments, “Right when I was being shot and ever since, I knew that I was watching television. The channels switch, but it’s all television.”

As we view Ondine in a closeup shot at the opening of Since, a male voice offscreen indicates the conceptual framework of the film, which will follow the model of the “Oswald display on television.” He continues: “First it happened, then it was played back in tape, and then it was played back in slow motion . . . Except that we don’t have to maintain the stiff character portrayals – like one individual can assume another role, assuming that he has assumed that role by choice originally.” The commentator also states that we’re not in Dallas. Ondine seems surprised and immediately contradicts this by saying, “It’s marvelous being in Dallas with the President.”

The participants appear to be pretty confused about the events. They are unable, for instance, to cite the proper street on which the motorcade is traveling or to supply the name of the Book Depository. Ondine indicates that Ingrid Superstar is his First Lady. He initially seems to think he’s the President, but then is informed that he’s actually the Vice President, Lyndon B. Johnson. Ondine announces that he has to hire the assassins, suggesting one of the common conspiracy theories surrounding the event, namely LBJ’s desire to be president at all costs.

Ondine gradually becomes frustrated, mostly because the other characters aren’t very imaginative in their repartee, especially Ingrid Superstar. Ondine complains that they “are absolutely boring.” The only person Ondine praises is the “close-mouthed” Jack Kennedy (his pal, Mary Woronov), who he claims “may have been the most interesting person here.” At one point Ondine turns his back to the camera in protest. He then addresses his fellow performers: “We all have to try to cohesively keep attention away from Jack and play some kind of a vague scene. I hate to be the announcer of this, but I really think that we’re all lacking in character. I have mine, sketchy as it is – I’m still trying to maintain it. After insulting others on the set, Ondine yells, “What the hell is the matter with you people?”

It’s almost as if by trying to stage the Kennedy assassination as a television event on film, Warhol is showing the inability of a theatrical presentation to be convincing or to hold our interest, because it’s incapable of employing the very techniques – repetition, slow motion, images of real celebrities in moments of tragedy – that kept viewers glued to their television sets, even though what they were watching was as minimal as anything Warhol had done in his own films. Since is ultimately about the artifice of live theater, and the fact that it relies so heavily on a suspension of disbelief.

In theater, an action is always different, whereas Warhol was fascinated with mechanical reproduction, with television’s ability to reproduce or replay the same exact image over and over again. On the other hand, Warhol allows for imaginative transformation to take place. Not only are objects mutable, but characters can change identities, gender roles, and move between the living and dead. Throughout Since, the recording apparatus – camera and microphone – as well as the lights becomes an intricate part of the action. Warhol stages the assassination of JFK, not as an historical event, but, largely due to the impact of television, as the media spectacle it truly was.

Note: For a detailed analysis of Since and other Warhol films, please see my book The Black Hole of the Camera: The Films of Andy Warhol (University of California Press, 2012).