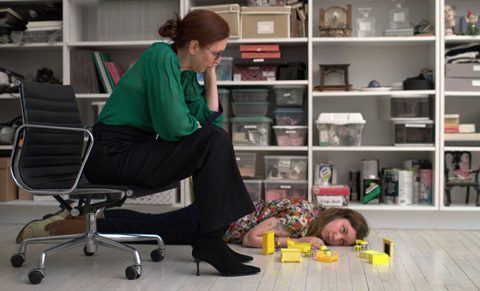 A move toward the autobiographical has been one of the more interesting developments to surface in recent indie cinema. Azazel Jacobs’s Momma Man (2008) and Josh and Benny Safdie’s Daddy Longlegs (2010) can serve as reference points. Lena Dunham’s Tiny Furniture (2010), the second feature written and directed by the twenty-four-year-old filmmaker, represents the most recent example. It won the top prize at the SXSW Film Festival in March, is being distributed by IFC Films, and played at BAMcinemaFEST last night.

On some level, all of these films deal with the filmmakers’ relationships with their parents. Daddy Longlegs is a fictional portrait of Josh and Benny Safdie’s eccentric father, but it details their own conflicted feelings about their dad based on memories from their childhood. I saw the film for the third time at the Wisconsin Film Festival in April. I can tell you that Daddy Longlegs gets better with each viewing, and this last time, it packed an even stronger emotional wallop due to Frey’s response at the end.

The other two films take the perspective of young adults, whose parents also happen to be well-known figures in the art world. Jacobs uses a surrogate actor, Matt Boren, in Momma’s Man, but he casts his own parents, Ken and Flo Jacobs, his real high school friend as Dante, and sets the film in the Tribeca loft in which he grew up. Jacobs later cuts in home-movie footage of himself as child, which makes the autobiographical aspect even more overt.

Lena Dunham plays the protagonist, Aura, in Tiny Furniture. The film is also shot in her family’s Tribeca loft in NYC, features her artist mother Laurie Simmons as her fictional single mother, Siri, and her high school-aged sister Grace as her fictional sister, Nadine. Her actual father, the painter Carroll Dunham, is not included in this family portrait. Aura has just graduated from college in Ohio (Dunham went to Oberlin), and the film is about leaving the safety net of college and Aura’s awkward attempt to navigate her life after graduation.

I don’t know the filmmaker personally – though I’m familiar with her film reviews – but the autobiographical parts, like in Momma’s Man and Daddy Longlegs manage to give the film additional layers of complexity. With semi-autobiographical work, a viewer is always conscious of how the filmmakers choose to portray themselves and their own family within a fictional world. Because the films are trying to blur the boundaries between non-fiction and fiction, those things that manage to be revealed – the unintentional slippages – actually turn out to be part of the work’s fascination.

Although Aura has all benefits of class privilege, she’s depressed to be leaving college. She fears her that her film theory degree will turn out to be useless in finding meaningful employment. Aura makes self-deprecating videos that feature her in very unflattering poses, such as in a bikini bathing suit, causing online viewers to ridicule her with comments like “whales ahead” and “what a blubber factory!” Upon returning home, she calls out, “Honey, I’m home . . . family?”

Aura doesn’t quite get the warm reception she somehow anticipates. Her mom is too busy photographing Nadine amidst dollhouse furniture (hence, the film’s title) for her art work. Aura questions why her mother has never photographed her. Siri claims that it’s because Aura is never around, but Nadine suggests that it’s because her legs are “longer and more supple.” In Aura’s absence, Nadine has pre-empted her room. There’s obvious sibling rivalry between them. Whereas Aura lacks self-confidence and is short and a bit on the pudgy side, Nadine, despite her age, is tall and slim and very self-assured.

Aura complains that she’s just broken up with her boyfriend, who has moved to Colorado. She gets very little sympathy. Nadine compares him to a “speck of Granola,” while Siri tells her, “You know, I always said he was really a sweet guy, but like the perfect first boyfriend – like the way a college boyfriend should be.” Her mother downplays her own twenties, thereby minimizing Aura’s feelings as merely reflecting a stage of life. While looking for a light bulb, Aura finds and begins to read her mother’s diary. Aura discovers intimate details about her mother’s life at her age, which she casually shares with her friends.

In Momma’s Man, Mikey’s mom dotes on him, reinforcing the image of him as an adult baby. Aura in Tiny Furniture is clingy and whiny and in need of her mother’s attention, but Siri is too self-absorbed and involved in her own art career to pay much heed. Aura has several female friends. One is from college – Frankie (Merritt Wever from Greenberg). While expressing great love for Frankie, Aura nevertheless backs out of sharing an apartment with her at the last moment, leaving Frankie in the lurch. Aura claims that it’s because her mother has become dependent on her and needs her, when it’s actually the other way around.

At a party, the hostess, Ashlynn (Amy Seimetz from Joe Swanberg’s Alexander the Last) manages to get Aura hooked up with a potential boyfriend, Jed (Alex Karpovsky), whose YouTube videos, unlike Aura’s, have gained him minor celebrity status on the Internet. When they meet, Jed tells Ashlynn, “I thought you told me there was going to be some grinding at this party . . . like straight-up, eighth grade-style grinding.” With a deadpan delivery, Ashlynn replies, “No, I said eighth grade-style crying. We’re all going to cry together.” This exchange epitomizes Dunham’s understated, but considerable humor.

At the same party, Aura re-meets a wacky childhood friend with a British accent named Charlotte (Jemima Kirke), who promptly slaps Aura in the face. She screams, “I’m so sorry I slapped you. I’m just so overwhelmed. Aura, are you here? Are you here?” It turns out that Aura has been deliberately avoiding Charlotte since high school. The two smoke pot together at Charlotte’s place afterward, even though Charlotte discloses that she’s spent time in rehab. She asks Aura, “Can’t we just start again as new friends, who were old friends?”

After watching Aura’s videos, Charlotte declares her a genius. Charlotte, who wears so much makeup she could easily be mistaken for a mime, curates art shows in Brooklyn and lives on her father’s credit card. She also gives Aura a tip about a hostess job at a neighborhood bistro. Despite Aura’s lack of experience, she does manage to get hired. Almost immediately she becomes attracted to the restaurant’s egotistical sous chef, Keith (David Call).

Both of Aura’s romantic escapades don’t end up well. Jed merely uses her because he needs a place to crash while he’s in New York City. He stays with her at her loft when Siri and Nadine are away scouting colleges, but their relationship remains platonic. Upon returning, Siri doesn’t approve of Jed and eventually insists that he leave. Keith lives with his girlfriend, but he really wants Aura to get him some Vicodin. Keith is a no-show for their first date, causing Aura to quit her hostess job.

When Charlotte arranges for Aura’s video to be shown in a group exhibit at an art gallery in Dumbo, Keith appears and the two have sex about as fast as Roger and Florence in Noah Baumbach’s Greenberg. Once again, Dunham’s portrayal of Aura in this situation is hardly flattering, but it’s nevertheless extremely humorous. To her credit, Lena Dunham is not at all afraid to have the joke be at her expense.

Tiny Furniture, however, is less about romance and Aura finding her place in the world than it is about mother and daughter relationships or about the changing relationship between parents and their kids in this particular generation. Lena views her mother as a friend and even a role model, even though she craves more attention from Siri, who is rather cold and aloof and, after she hurts her back, glides through the loft like Morticia from The Addams Family.

Like Mikey in Momma’s Man, once back home, Aura also regresses. She walks around in the equivalent of her underwear. She begins to talk in a childish voice like a little girl, at times calling Siri, “Mommy.” Like Mikey, Aura also winds up sitting in her mother’s lap. She also finds it hard to leave and explodes at her mother and sister – she refers to the two of them as a “gang” – for not supporting her emotionally and making her feel like an outcast in her own home.

Although the motivation for Mikey getting stuck at home in Momma’s Man is never clear, he lies to his parents about his situation. Aura, on the other hand, tells Siri all about the sexual fling she’s just had, including the odd setting and the fact that she didn’t use protection. I recognize that there’s a gender difference at work in the two films. I can also assure you that I never would have dreamed of discussing such things with my parents.

Parents of boomer kids wanted them to have better lives, which is why they made incredible sacrifices to send their children to college. As a result, though bridged by love, a chasm developed between the two generations. Parents acted like parents not friends. Momma’s Man and Tiny Furniture are about young people who have hip, educated, and highly successful parents.

These days, there’s something almost incestuous occurring between some kids and their parents, such as Aura’s need to sleep in the same bed with her mom. Parents and kids expect to be close friends. They befriend each other on Facebook, where young people have few qualms about disclosing extremely personal aspects of their lives. In an interview, Lena Dunham comments, “I clearly project oversharing, it’s what I do!”

To me, Tiny Furniture feels very much a product of this current generation, whereas Momma’s Man doesn’t. This makes sense because Azazel Jacobs is considerably older than Dunham. Aura reveals at the end that she aspires to be as successful as her mother. When she adds that she wants to be as successful as Nadine, who has just won a major poetry prize, Siri indicates that’s going to be much harder. The film mimics Andrew Bujalski’s films in the abrupt cut that ends the film.

Dunham employs a type of naturalism that has become the prevalent style of many younger filmmakers today. But she and her extremely talented cinematographer, Jody Lee Lipes, who also shot Antonio Campos’s Afterschool, wisely decide not to use a hand-held camera. They favor wide shots that capture the expansive space of the loft, which is often divided compositionally by large stacks of books. The use of wide shots helps to create some distance from events that might otherwise seem indulgent.

Lena Dunham might play a sad sack, clownish figure, but don’t be fooled for a moment. Her achievement in Tiny Furniture is impressive by any standards, but it’s even more extraordinary given her age. This talented filmmaker is just getting started.