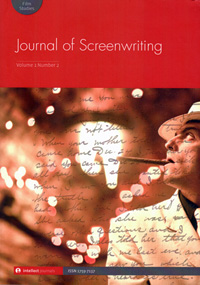 In the most recent issue of The Journal of Screenwriting (which unfortunately isn’t available online), Kathryn Millard has written a really terrific review of Paul Wells’s screenwriting book Basic Animation: Scripting. In her review, she also cites my book Me and You and Memento and Fargo. Kathryn Millard is a noted filmmaker, writer, scholar, and screen theorist based in Sydney, Australia. She writes:

“[Paul Wells’s] Basic Animation: Scriptwriting was designed to assist writers to initiate, develop and refine screen animation ideas. It does that admirably. More than that, though, together with J.J. Murphy’s insightful look at American independent screenwriting Me and You and ‘Memento’ and ‘Fargo’: How Independent Screenplays Work (Murphy 2007), this is one of the best books about screenwriting to have been published in recent years. Yet the two books could not be more different in style and approach. Murphy focuses on independent cinema in clear, engaging prose, tracking how a series of seminal independent features were developed and written and his case studies include scripts and films by Jim Jarmusch, Hal Hartley, Allison Anders, Miranda July, David Lynch and Gus Van Sant. Wells focuses on animation and a wide range of scripts and films. What the two books share is a depth of research and scholarship, an attention to the creative process of screenwriters and film-makers that goes far beyond the tired old clichés about beginnings, middles and ends and ‘Story’ being hardwired into humans trotted out in manual after manual, and at self-help and infotainment seminars around the globe. Both Murphy’s and Wells’s books suggest a rich vein of work on the art of writing for the screen that has barely begun to be mined.”

In the same issue of The Journal of Screenwriting, Steven Price has an article about last year’s “Rethinking the Screenplay” conference in Helsinki, which drew 120 scholars from five continents, and was a very enriching event. I gave a paper on the collaboration between the writer Jon Raymond and filmmaker Kelly Reichardt in Old Joy and Wendy and Lucy. Price writes:

“What was particularly impressive was the degree to which participants from such differing backgrounds could consistently engage in productive and friendly debate about the validity and parameters of the field. Torban Grodal of the University of Copenhagen, as the opening keynote speaker, shared his work on the appeal of certain film genres and film narrative s due to a common ‘cognitive DNA’ of audiences due to generations of experiences and teachings. David Howard of the University of Southern California provided another keynote address concentrating on classic story structure. From Gary Lyons’s inside account of dramatized television documentaries and J. J. Murphy’s similarly detailed discussion of collaboration in contemporary feature film to Paul Wells’s entertaining exposition of the role of the screenplay in animation and Bridget Conor’s critique of screenwriting manuals, this was a conference in which connections between widely differing disciplines could be posited, interrogated and explored in the kind of cooperative and supportive environment that has until now been lacking in a field that rarely receives the institutional recognition it deserves.”

I expanded my paper into a book chapter that will appear in Jill Nelmes’s upcoming anthology, Analysing the Screenplay (Routledge, 2010).

Analysing the Screenplay is scheduled to be unveiled at this year’s Screenwriting Research: History, Theory and Practice conference, September 9–11 in Copenhagen, Denmark. The conference is sponsored by the University of Copenhagen.

I will be giving a paper entitled “Less is More: In Praise of the Underwritten Screenplay” on a panel with Ian Macdonald of the University of Leeds and screenwriter Howard Rodman (Savage Grace) who teaches at USC. I’m also chairing a panel on “creative collaboration” with papers by Bridget Conor, Mats Björkin, Eva Novrup Redvall (one of the conference organizers), and Miranda Banks. There will be keynote addresses by Mette Hjort, Steven Maras, and Janet Staiger.

In other personal news, Mike Everleth over at Bad Lit: The Journal of Underground Film also happened to write a lengthy and very thoughtful review of Me and You and Memento and Fargo last week. It is always a good feeling when someone connects with what you’re doing.

If you don’t know Bad Lit or his Underground Film Guide, you’re really missing out. I check out Bad Lit all the time. Since Mike restarted his weekly “Underground Film Links” again, it’s the first thing I look at every Sunday morning. What I love about Bad Lit is Mike’s total passion for alternative cinema. Anyway, if you’re not familiar with the site, I highly recommend this informative blog.