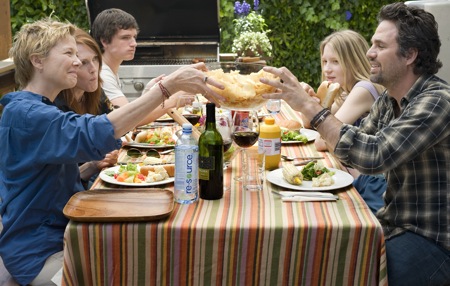 It seems an accepted truism that family secrets need to be explored, especially if it involves children tracking down biological or estranged parents. No one ever considers that there might be negative consequences – a proverbial monster lurking in the closet, so to speak. In Lisa Cholodenko’s The Kids Are All Right, fifteen-year-old Laser (Josh Hutcherson) talks his eighteen-year-old half-sister, Joni (Mia Wasikowska), into contacting the sperm donor for their lesbian parents. Joni is about to go off to college and expresses reluctance, but all it takes to change her mind is for Laser to tell her, “I never ask you for anything.” Joni makes the phone call and the two secretly meet their sperm donor, Paul (Mark Ruffalo), a handsome restaurant owner and organic gardener. The initial verdict: Joni thinks he’s pretty cool, while Laser has some reservations, especially because Paul seems to be “a little into himself.”

The film’s hook is not only the quest to meet the sperm donor, but its exploration of a family with lesbian parents. Nic (Annette Bening), a successful doctor, is married to Jules (Julianne Moore), an airhead underachiever, who has decided to start a landscape design business. She’s already bought the truck, even though she doesn’t have any clients, which immediately becomes a source of friction. The bread winner/ piggy-backer dynamic will fuel their long-simmering conflict throughout the film. When they speak, the two often ask each other, “What do you mean?” It’s an odd question for a long-time couple to ask, but they clearly have issues to work out, as evidenced by Jules’s spotty employment record and Nic’s growing problems with alcohol.

Both Nic and Jules worry about their kids, and want them to be perfect, lest it reflect upon their lifestyle. Nic, for instance, insists that Joni write “Thank you” cards and Laser write a “Get well” card to a relative, reflecting her middle-class values. They’re concerned about Laser, however, who is hanging out with a psycho skateboarder named Clay (Eddie Hassell) and (unbeknownst to them) also snorting coke. Jules asks Laser, “What do you get from that relationship?” Male companionship might be one answer, but when Laser enviously watches Clay wrestle with his dad, we understand that there’s even more to it.

Nic grills Paul about being in the “food services industry,” especially because his current interests – he turns out to be a college dropout – don’t appear to match the essay about himself he wrote years earlier. Nic wants to get rid of him pronto, but Paul hires Jules to do some landscape design work at his house. Once Jules starts working there, she can’t help but notice, “I see my kids’ expression in your face.” We suddenly know where this is heading. Paul has become smitten by the two kids for the very same reason. He spends time with Laser, who asks him why he donated sperm, which Joni earlier acknowledges is “pretty weird.” Paul answers that it was “more fun than donating blood,” then gives a more altruistic reason, and finally hedges. Laser asks him how much he got paid – a pittance – but Paul, staring at the results, insists that he’s glad he did it.

Lisa Cholodenko (High Art, Laurel Canyon) wrote the script for The Kids Are All Right with Stuart Blumberg over a five-year period. For her, it was an attempt to write something more mainstream than her previous indie films. Blumberg’s influence is in making the film more blatantly funny and having a more conventional structure. Indeed, the film initially feels like a comedy – not a broad comedy like the Duplass bothers’ Cyrus – but a comedy nonetheless. Much of The Kids Are All Right is indeed hilarious, especially Nic’s drunken anti-New Age rant about “heirloom tomatoes” and “composting” at a restaurant with friends, as she says things like “I like my wine! Okay! So fucking sue me!”

What I find most intriguing about The Kids Are All Right, however, is the undercurrent of melancholy that permeates the first two acts. The key scene occurs at a dinner at Paul’s house, where Nic, after some detective work in the bathroom and bedroom, figures out what’s been going on between Jules and Paul. The camera focuses on Nic’s face as she drinks a glass of wine, while the dinner conversation recedes and turns into a grating sound. The subsequent fight between the parents causes the kids to learn about the affair as well. The third act switches from comedy into melodrama, largely because it focuses on the effect that the revelation has on Joni and Laser.

Given its controversial sexual politics, The Kids Are All Right doesn’t take the easy way out. If the film sets out to answer the right-wing criticism of the effects of gay marriages on children, then the answer is the kids are fine. It’s the parents who aren’t. Like all long-term relationships, they are plagued by problems. Jules, in fact, gives an apologetic speech about marriage, in which, consciously or not, Moore seems to be channeling Carol White at Wrenwood in Safe, only she’s more articulate in this instance, as she tells the rest of them, “Marriage is fucking hard!”

The two screenwriters attempt to depict lesbian couples as being no different than straight ones, so The Kids Are All Right ends up being a defense of the nuclear family, warts and all. The parents might not love each other every minute, but they love their kids. But the kids might not love the parents nearly as much. When Nic and Jules demand hugs from Laser, he suggests they hug each other instead. At college, Joni, who still seems very sad and crushed by events, embraces Laser and remarks, “I’m sorry to leave you with them.” The moms then smother her and cry like babies, as we watch Joni’s bewildered and embarrassed response.

For Cholodenko, who is openly gay and raising a young child with her partner, and Blumberg, who had the experience of being a sperm donor while in college, there’s an autobiographical element to the film. The genesis of the script stemmed from Cholodenko’s fears that the biological father of her child might some day turn up unexpectedly. The Kids Are All Right, ends up casting Paul in the role of the repressed monster, who wreaks havoc of the family. Whether he deserves to be or not, he must nevertheless be villainized and expunged.

The Kids Are All Right is a well-made film pitched to the mainstream. I don’t have a problem with that, especially because, at least in the interviews I’ve read, Cholodenko hasn’t tried to suggest that the film is really “indie at heart” or any of those other disingenuous deceptions indie filmmakers use when they deliberately make something more commercial. The Kids Are All Right has a terrific cast: Julianne Moore, Annette Bening, and Mark Ruffalo. But, for me, Josh Hutcherson and Mia Wasikowska often steal the focus away from the stars through their subtle reactions and more understated and naturalistic style of acting.