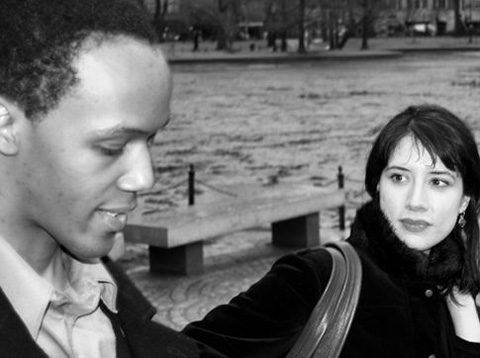 Damien Chazelle’s impressive debut film Guy and Madeline on a Park Bench represents an amalgam between the realist aesthetics of the New American Cinema of the late 1950s and 1960s and the free-form casualness of the French New Wave. It pays homage to American musicals and Jacques Demy’s The Umbrellas of Cherbourg (1964) through its opening iris shot of an umbrella and montage sequence of Guy (Jason Palmer), an African-American trumpeter, and Madeline (Desiree Garcia), an aimless graduate student, who appear to break up on a park bench.

Following their breakup, Guy takes down and hides a photo of the two of them in his apartment. The story flashes back to one week earlier, where we see Guy giving Madeline lessons on how to play the trumpet. After she blows a horrible note, she comments, “It sounds like someone’s dying.” To Guy, whose entire life is expressed through music, that might matter more than we realize. From a jam session, where Madeline observes Guy play, the film shifts to another young woman Elena (Sandha Khin), who watches a street juggler perform and then gives him a buck and her phone number. Nothing comes of this, but it establishes her character, especially once she gives him two names – her real name and fictional one.

Elena later succeeds in picking up Guy on a crowded subway. The scene is conveyed through a remarkable series of wordless shots – their feet and hands brush ever so lightly against each other; oblique glances turn into knowing eye contact, before she boldly slips her two fingers into his pants pocket. As Madeline studies alone, the film circles back on itself as we glimpse Elena in Guy’s apartment, where Guy again stashes the photo of him and Madeline.

Guy attends a party that turns into a musical as the camera pans back and forth between energetic singing and tap-dancing in one room and Guy playing trumpet in another. The exuberance of the scene provides a telling contrast to the staid grad student gathering that Madeline splits out of boredom. After documentary shots of her walking through Boston, the camera frames Madeline, who breaks into a song about her relationship with Guy as she strolls through the park: “It happened at dawn; it happened in this park . . .” The scene ends as she sits down on a fountain, so that half of her is covered by a sheet of falling water.

The film uses a parallel structure to follow the lives of the three characters in what becomes a romantic triangle. Madeline hooks up with another guy, who insists on waiting for her while she gets her hair cut at a beauty shop, but she abruptly ditches him afterward. Meanwhile, as Guy and Elena shower together, she asks him about his plans for the day. Guy tells her that his family is visiting, but doesn’t attempt to include her. Her hurt reaction registers clearly in a profile shot of her face, as she splashes water on it.

The family’s visit exemplifies the film’s elliptical style. In a wide shot, four family members carry their luggage down the street and into Guy’s apartment. We expect to be introduced to them, but Chazelle resorts to synecdoche instead. As Guy teaches his mother how to play the piano, the camera ends up focusing on their fingers hitting keys. The film then cuts to Elena lying pensively in bed. Guy plays the trumpet loudly the next morning. When she complains, he claims that he’s working on a piece for her. As she stews in the bedroom, Guy comes in and blows his trumpet again, indicating the growing tension between them.

Madeline departs to New York City, where she meets an older guy (played by the filmmaker’s father, Bernard Chazelle) in the park. He sings in French while cooking for her in his apartment. After trying on a hat at an outdoor stand, Elena also ends up going home with a middle-aged stranger, Frank (Frank Garvin), but his twelve-year-old daughter (Alma Prelec) is unexpectedly there, and the three of them awkwardly play a game of “twenty questions.”

When Guy plays a tape of the earlier jam session, it causes a flashback to the actual event. The film cuts from Guy’s expression to his pounding on the door of Madeline’s apartment, but her landlords indicate that she’s in New York. Madeline returns to her job at the Summer Shack, where she learns about Guy. As she cleans the nearly deserted restaurant, she sings and dances an elaborate musical number about “kissing the boy in the park,” which ends with her sitting on the park bench before the two ex-lovers finally meet up once again

Some reviewers have struggled with the legibility of the film. Chazelle employs an episodic and elliptical style of filmmaking that’s less concerned with narrative coherence and dramatic arcs. Even after two viewings, I’m not sure I completely grasp the circularity of its structure or the time frame of Guy’s relationships with either woman. Yet the film’s concern for spontaneous and impressionistic 16mm black-and-white camerawork, musical interludes and choreographed dance numbers more than compensate for the film choosing to ignore certain rules of classical narration.

Guy and Madeline on a Park Bench is much more of a mood piece. Chazelle is able to get wonderfully naturalistic performances from his nonprofessional cast. Sandha Khin’s outgoing manner provides a striking contrast to Desiree Garcia, whose introverted character, other than when she sings and dances, is conveyed mainly through her silence and piercingly sad eyes.

Jason Palmer doesn’t play a jazz musician – he is one. His body language and musical talent convey his character better than any dialogue, which is kept to a minimum. That was a deliberate strategy on the part of the director and the film’s gifted music composer, Justin Hurwitz. Chazelle explains in Interview: “I think we both really wanted the music to be a character in its own right, and the key storytelling device in the movie – the thing that was really going to tie it together, convey emotion, and say what the characters couldn’t say. The movie is really about shy, inarticulate people.”

Madeline on a Park Bench might be about a generation of shy, inarticulate young people, but the film has such an invigorating style that Chazelle’s tale of broken Beantown hearts feels strangely uplifting.