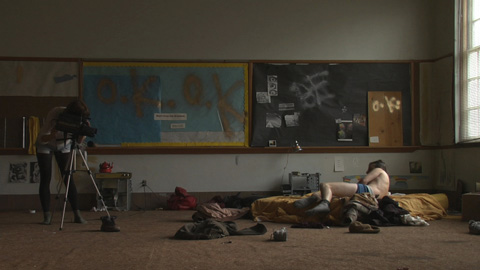 Dustin Guy Defa’s debut feature Bad Fever, set in the director’s home town of Salt Lake City, presents a fascinating study of contrasting characters: Eddie, a lonely misfit living under the thumb of his mother, and Irene (Eléanore Hendricks), a harsh street hustler, with whom he gets involved.

Eddie is a wannabe stand-up comic, who’s not the least bit funny. It’s a role perfectly suited to Harmony Korine, but Defa cast mumblecore director Kentucker Audley in the part. The choice proves oddly intriguing because Audley, who directed and acted in Team Picture (2007) and Open Five (2010), has been a strident advocate of naturalistic acting based on a performer’s own life. For him to play such a stylized role is clearly out of character. The irony turns out to be the fact that Audley is often improvising, whereas Hendricks appears to be working closer to the page. Both are credited with providing “additional material” to the film’s script.

Bad Fever begins with a closeup of Irene making a phone call. When there’s no answer, she strolls over and stands in front of a convenience store. As someone approaches, she asks the person to buy her a pack of cigarettes. Irene seems desperate, as she circles around nervously. She opens the door and yells, “Marlboro Lights!” Eddie, a young man with long hair and a blue cap pulled down, as if he’s trying to appear invisible, exits and hands her the pack. He gets in his car and drives off, as she lights a cigarette in the background.

At a restaurant, Eddie asks Irene, “Do you have a boyfriend?” The awkwardness of their conversation is a bit unnerving – like watching a spider spin a web to ensnare a naive and unsuspecting victim. That becomes clear later when Irene begins to film herself in the back seat of Eddie’s car with an antiquated video camera. When he inquires what she’s doing, she mentions making videotapes for a guy in Idaho Falls she met on the Internet. We begin to wonder, but Irene assures Eddie, “I don’t do anything sexual, all right?” But when Eddie watches her VHS tape at home later on, the sexual connotations of her eating a bowl of cereal are unmistakable.

The next day, Irene takes Eddie to an abandoned schoolhouse. As the camera is running, she asks seductively, “Do you like me?” After a pregnant pause, he answers, “Yeah, I think I do.” She asks him to take off his jacket. He wants her to turn off the video camera, but she insists, “No, that should stay on.” She takes his hand and begins to suck on his index finger. Irene orders him to lie down and take off his clothes. She becomes more abusive and barks, “Are you fucking deaf and dumb? Take off your fucking shirt!” She pulls off his pants and tells him, “Take off your underwear, you stupid bitch!” When he freaks out, she calls him a “pussy.” In leaving, Eddie apologizes, but insists that videotaping him sexually isn’t terribly romantic.

Even though Eddie is flustered by what’s happened, he’s smitten with Irene. He decides she’s someone he’d like his mother to meet, along with his imaginary comedy club fans. Eddie puts on a sports coat and tracks her down. Back at the abandoned school, Irene spray paints “dick” under a lewd drawing she makes of one. She then begins to direct Eddie in a home video and quickly turns into a dominatrix by making him pretend to have sex with a pink mop. Dressed in Eddie’s clothes, she then forces him to participate in a mind-boggling gender reversal that is so humiliating it’s truly painful to watch – not unlike what occurs to another social outcast, Keith Sontag (Dore Mann), in Ronald Bronstein’s Frownland (2008). This unlikely romance follows its inevitable trajectory, which is to suggest that more humiliation awaits poor Eddie.

Defa, who’s been making film since he was a kid, has an incredibly strong visual sense that feels effortless. There are some wonderfully subtle shots, such as when golden light reflects intermittently off the back of Eddie’s head as the camera follows behind him. Shots of railroad yards and deserted city streets at night suggest the desolation of an alien planet, which is reinforced by the sound of howling wind. The pacing of the film, which Defa attributes to his editor, David Lowery, who reshaped the structure of the film, is pitch-perfect. Yet, because Bad Fever is essentially a character study, the film succeeds largely due to the riveting performances of Audley and Hendricks (along with Annette Wright as Eddie’s mom and Allison Baar as Yoko in small roles).

Having seen Audley in his own films, what he’s doing performance-wise in Bad Fever feels incredibly risky, especially his use of idiosyncratic speech patterns and willingness to engage in embarrassingly unfunny comic skits. Hendricks, who appeared as the lead in Josh Safdie’s The Pleasure of Being Robbed (2008) and in Josh and Benny Safdie’s Daddy Longlegs (2010), proves terrific once again – a master at rolling her eyes. She manages to convey the pathology of Irene’s character through very small gestures, such as the way she holds and then carries a gray and white cat. Irene has adopted a hard edge as a means of survival – a defense mechanism that Eddie sadly lacks. But, even more importantly, Irene appears well-versed in feminist film theory. She clearly grasps the gendered dynamic of cameras and power, especially how to undercut the visual pleasure of the male gaze.

Bad Fever premiered at SXSW in March. The film is playing as part of a series, “Inside Jokes,” programmed by Mike King, at the UW Cinematheque. Defa’s film will have its Madison premiere on Thursday, July 28 at 7 PM. Local fans of indie cinema should not miss the opportunity to see it. The Brooklyn-based filmmaker will be in attendance.