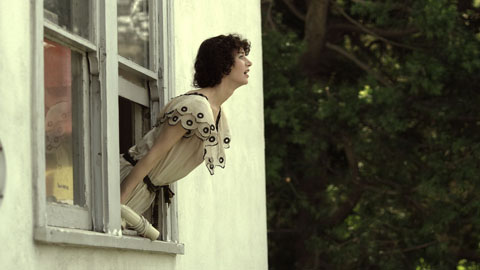 The idea that things in the world are not quite right seems to be pervasive these days. Economic recessions and global crises will do that, but something much deeper appears to be at work. Jeff Nichols’s new film Take Shelter takes most people’s anxieties about health insurance, job loss, and climate change and turns them into a powerful apocalyptic drama about an Ohio construction worker named Curtis, who’s either clairvoyant or going bonkers. Nichols explained the genesis of the film in an interview in indieWIRE: “Bush was in the White House, the economy was collapsing, there were wars everywhere, towns were getting destroyed by storms. It was just like, what’s going on? It felt like the world at large was losing its grasp of keeping everything together. That was just in the air.” Take Shelter, which features a heart-wrenching performance by Michael Shannon, is a conventional genre film in many respects. Miranda July’s The Future deals with similar subject matter – those same anxieties about the future we all carry around with us while we navigate our daily lives. July’s enchanting new film presents the unconventional version, but it’s equally dark and disturbing.

As should come as no surprise to Miranda July fans, The Future is weird in highly imaginative ways. For one thing, it begins with a voice-over narration by a cat named Paw Paw, whose raspy voice is unmistakably July’s. “Have you ever been outside . . . never been inside . . . Then you know about the darkness that is inappropriate to talk about,” the cat tells us knowingly. Paw Paw, whose life outside has been a nightmare, is about to be put to sleep, but gets a reprieve when his rescuers, a couple named Sophie (Miranda July) and Jason (Hamish Linklater), agree to adopt him. In their mid-thirties, these two people live inside, but rarely go outside. When we first meet them, they lie on the sofa with their Apple laptops, too lethargic even to move. Like Dasha Shishkin’s painting Glory of Choice (which was part of her May show at Zach Feuer Gallery in Chelsea), the outside world is full of threats. Jason is a computer tech specialist, who works from home. Sophie teaches dance (which might more accurately be described as “hopping”) to young kids.

When Jason and Sophie, in an intimate moment, suggest, “I think we’re ready,” we think they’re referring to sex or trying to get pregnant, but they’re actually discussing adopting Paw Paw, who, due to renal failure, has only six months to live. The two of them reason that it’s not too big a commitment – they’ll be able to go on with their normal lives afterward. At the animal shelter, Jason views a drawing of a young girl holding a cat. The subject, Gabriella (Isabella Acres), is disappointed that her dad’s drawing hasn’t sold in the fundraiser, and asks him bluntly: “Do you want to buy it?” Jason buys the drawing, but Gabby has included her separated parents’ phone numbers on the back should he want to return it. Paw Paw is excited that the nice couple has returned and, after they pet him, he accidentally purrs. In cat terms, he understands the implications – he now belongs to them – admitting a feeling that would be “unwise to feel outside.” But, due to his injuries, Paw Paw must stay at the shelter for the next month.

Sophie and Jason end up adrift as a result of the unexpected delay in adoption. As they ponder their lives, the fact that they are five years from being forty creates a panic, because, after fifty, they consider the remaining years to be nothing more than “loose change.” As they discuss their aspirations, they feel an acute lack of achievement. Jason laments the fact he’s not richer or smarter or a world leader, while Sophie wishes she followed the news more closely. Sadly, they conclude: “It’s too late for us.” Facing an early mid-life crisis, they two try to re-prioritize their lives by imagining that they have only a month to live. They immediately quit their jobs. Despite an aversion to the outdoors, Jason canvases for the environmental group “Tree by Tree,” while Sophie decides to do a YouTube dance piece every day for 30 days. She also takes the drastic step of cutting their connection to the Internet, which they hope will make them more alert to what’s happening in the world. Sophie, however, soon becomes frustrated and restless. She obsessively calls Marshall (David Warshofsky), who made the drawing of Gabby and the cat, and the two begin an affair.

The Future is based on oppositions: inside/outside and tame/wild, in which Sophie becomes equated with Paw Paw. When she comes home, she tells Jason, “I’m wild,” which mirrors Paw Paw’s confession that he is theirs by day, but wild and alone at night. As Sophie tries to confess her affair to Jason, he frantically tries to stop time, a long scene in which he talks to the moon. The moon speaks in the voice of an elderly man named Joe (Joe Putterlik), who earlier sold him a reconditioned hair dryer. Yet Jason’s stopping of time winds up having disastrous consequences.

Like July’s previous feature Me and You and Everyone We Know (2005), The Future presents a world where human beings are subject to irrational forces beyond their control. In fact, Jason’s efforts to stop time in order to spare himself the pain of losing Sophie only make matters worse. In July’s world, children, like Gabby, have the power to manipulate adults (she orders Sophie to act naturally and wave to her father), and time is anything but linear. There are other quirks: a cat narrates the story from beyond the grave, an old man writes dirty limericks to his wife, Gabby buries herself neck-deep in the ground at night, two pregnant women’s children keep aging until they replace their parents who have died, the moon talks, and a yellow shirt becomes animate and grows to the point where July climbs into it to perform a strange womb-like dance. And what other feature would overtly reference Andy Warhol’s Sleep (1963)?

As he’s canvassing for his environmental cause, Jason addresses the sad state of the world. He tells a stranger: “It’s probably too late.” He compares the situation to a cartoon where a building gets hit with a wrecking ball. “We’re in that moment,” he contends, when the wrecking ball has already hit and everything is about to fall down. The Future captures the texture of what it feels like to be alive at a time when we all sense that the world might be on the verge of collapse, and how that affects us on an emotional level. Jason’s personal loss at Sophie’s betrayal is made all the more poignant by the sad fate of Paw Paw and his naïve but profound narration – his enduring love for these two messed up humans, until the moment when he confronts the void. “It’s just light,” he says, “and it goes on and on and on.”