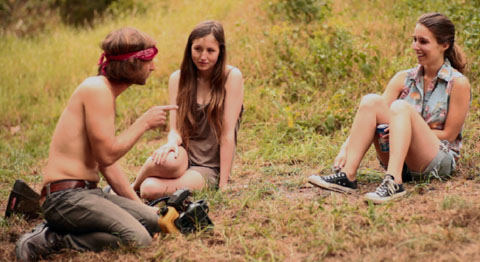 Sophia Takal’s Green delves into the lives of a young urban intellectual couple from New York. Sebastian (Lawrence Michael Levine) and his girlfriend, Genevieve (Kate Lynn Sheil), retreat into the country, presumably somewhere down south, for an extended period. Sebastian is a writer, whose project is improbably about sustainable farming, while Genevieve has tagged along to be with him. Fissures begin to appear in their relationship, especially when a neighbor, Robin (played by Takal), in her own naïve way, exacerbates the hidden tensions between them. Interviews with the director suggest that the film is about female jealousy, but, for me, Green also explores class difference, which, as we all know, has recently developed into class warfare. Given the current polarized political climate in this country, this is precisely what makes Takal’s film resonate so deeply.

We get a sense of Sebastian and Genevieve’s relationship in the pre-credit sequence when they sit around with peers (Alex Ross Perry, the director of The Color Wheel, and Dustin Guy Defa, the director of Bad Fever, among others) and compare Philip Roth to Proust. Although it occurs early on, so that we don’t yet have a grasp of the characters, Sebastian puts down Genevieve’s difference of opinion by suggesting that she only read the first 30 pages of Roth’s novel When She Was Good. She claims otherwise. In defending his love of Roth, Sebastian drapes his arm around her, winks to the others, and smugly tells them, “I’ve read a little bit more.” This cuts to a wide shot of two lawn chairs on the bottom left of the frame of a rural landscape, as their car pulls up and they begin to unpack.

As Sebastian writes, Genevieve quickly becomes bored by life in the country. Suddenly left on their own, the two are revealed to be utter strangers, whose hip intellectual snobbery is the only glue that holds their fragile relationship together. Once Robin shows up – they initially find her asleep on their front lawn – she becomes an easy target for their ridicule. A southern working-class country bumpkin, she intrudes upon their lives, without quite realizing that she’s the object of their scorn (as well as their desires). Early on, Robin comes over with some groceries and a magazine. When Robin asks Genevieve what she’s reading, she answers, “Georges Bataille.” The clueless Robin responds, “Oh, cool.”

Sebastian and Genevieve’s stint in the country begins to feel like a regression into ’60s nostalgia, especially when Sebastian begins to wear a headband. But the hippie idyll has its dark side. In one telling scene a good forty minutes into the film, Genevieve and Sebastian make love. Her refusal to play along with his sexual fantasy exposes a deep personal rift between them and appears to trigger what follows. Green may take its sweet time to get going, but once it does, it moves with the swiftness of a natural disaster. As Green continues to unfold, Genevieve gradually bonds with Robin, before beginning to unravel. She views her relationship with the older Sebastian with a sense of disdain mixed with extreme insecurity, especially when she starts to imagine him being sexually involved with Robin.

Genevieve wants to go back for an art show, which has gotten a good review in Artforum, but Sebastian pontificates: “Honey, I knew this guy at Dalton. Okay? He couldn’t even string a complete sentence together; no less create a coherent piece of art.” As Genevieve shakes her head in disagreement, Sebastian insists, “He basically fills a room with junk and then a group of moronic quasi-intellectuals come in, mentally masturbate, and decide it actually has some meaning to it.” As he tries to explain installation art to Robin, Genevieve becomes openly rude to her. When Robin unexpectedly shows up with a date one night, Genevieve finally loses it. In a field, the film reaches an ambiguous climax, but the film’s resolution is cruel enough to spark a class uprising.

Shot in a mere two weeks, Takal’s directorial debut won a prize at SXSW and has been playing the festival circuit. Some scenes were initially improvised and then later scripted – a technique that’s being used more and more these days. Takal is not interested in naturalism, but what lies beneath its surface. In an interview in Hammer to Nail, she commented: “I think mumblecore movies are really honest and natural, but I wanted to use the medium to explore someone’s psychology, and what was going on inside of [Genevieve]. That was important to me. So I definitely did want to step away from handheld naturalism.”

Takal, who has a budding career as an actress, conveys such genuine sincerity as Robin that she exposes the mean-spirited flaws of the other two characters every time she opens her mouth. A psychodrama with overtones of the horror genre, Sophia Takal’s Green has the feel of a sharp spike rammed into an unsuspecting heart.