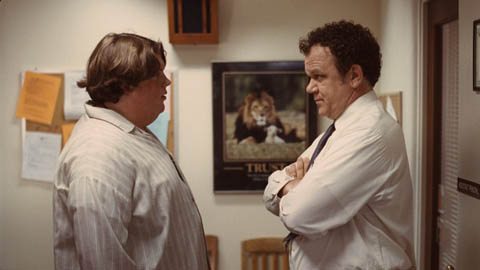 In Azazel Jacobs’s Momma’s Man, there’s a scene toward the end where the mother of the protagonist, Mikey, gets him to sit on her lap and he looks like an overgrown baby, dwarfing her in size. The image serves as an apt metaphor. He’s not a momma’s boy, but a grown man – stuck in a state of arrested development. Jacobs’s latest film, Terri, which played at last year’s Sundance Film Festival, features another social misfit, only this time, he’s not a young adult regressing back to high school, but an actual overgrown teenager named Terri (Jacob Wysocki), who wears pajamas to school. Unlike Mikey in Momma’s Man, Terri hasn’t been smothered to death by a doting mother. In fact, he doesn’t have parents – he claims not to know where they are – but lives with his Uncle James (Creed Bratton), who suffers from early Alzheimer’s disease. Although the arc of Jacobs’s career appears to be heading toward becoming more commercial, beneath the surface of this coming-of-age story, from a script by Patrick deWitt, lies something far more bizarre than first appears.

The film begins with a close-up shot of Terri slumped against bathroom tiles. There’s a knock on the door. His head moves, as we hear Uncle James badgering him about cleaning the “tub ring.” After the opening title credit, we see the overweight Terri – a huge mound of flabby flesh – soaking in the bathtub. He responds, “I can’t clean it because I’m still in here, okay?” Terri’s resigned and curt responses show a frustration with having to deal with an uncle who has trouble keeping the basics straight. For this teenager, roles are reversed – he’s forced to be the caretaker when he’s clearly struggling himself. At school, he’s perpetually late and the other kids harass him by discussing sexual acts with girls, much to his annoyance. Terri tries to remain invisible, but his inappropriate attire brings him to the attention of the assistant school principal, Mr. Fitzgerald (John C. Reilly), who delights in keeping track of the weirdos at his school.

Mr. Fitzgerald tells Terri he basically divides the kids into two groups – the good-hearted kids and the bad-hearted ones. When Terri asks which category he falls in, Fitzgerald suggests that he belongs in the good-hearted group, but then makes Terri come to see him every Monday morning. Mr. Fitzgerald is something else – an adult misfit in a position of authority. The most whacked-out student, Chad Markson (Bridger Zadina) – a pint-sized kid with the habit of pulling out his hair – is highly critical of Mr. Fitzgerald: “Half the time I think he wants to hit me; the other half, I’m scared he’s gonna kiss me or something.” When Chad goes into greater detail, Terri freaks out and abruptly kicks him out of his house.

Terri winds up befriending a female classmate, Heather Miles (Olivia Crocicchia), after she gets fingered by Dirty Zach in home economics class. When Mr. Fitzgerald is about to have her transferred to another school, Terri intervenes and the two teens strike up a friendship. When the ostracized Heather comes over to Terri’s house, Chad, uninvited, reenters the picture. This leads to an extended scene where the three of them get high off whiskey and pills. The loosening of inhibitions leads to painful and humiliating revelations that suddenly push the film beyond genre into what feels like uncharted territory. “It was not storyboarded,” Jacobs says of the scene in a Time Out Chicago interview. “I was able to get the kids to move around and start working together. I was on uncomfortable ground.… There was only one right thing to do—to [create] an atmosphere that showed realistically what these kids were willing to do.” The scene is riveting precisely because we’re never sure what might happen next, which is what makes adolescence such a fascinating phase in the process of growing up.

In Terri, all the characters manage to expose unflattering aspects of themselves. For all his goodness, Terri reveals a dark side when he becomes overzealous at catching mice in traps, causing Uncle James to tell him, “I didn’t even know you were capable of doing something so ugly.” When Terri tells Mr. Fitzgerald about the incident, he responds, “It’s blood lust, dude. It’s a hard habit to stop once you get started in on it.” Terri, however, later becomes angry when he realizes that he’s been lumped in with the other “monsters” at school, which causes Fitzgerald to tell him a personal story about growing up, which merely proves to be a part of his motivational shtick.

Mr. Fitzgerald may, in fact, be the most confused person in the entire film. He is shown to be a liar, a guy who pretends to chew kids out for the benefit of his elderly, dying secretary. Fitzgerald is someone with his own marital problems. His interactions, fraternization, and unprofessional comments about the personal lives of his students and staff would most likely get him fired (if anyone happened to be paying attention). It’s no surprise when graffiti appears on the side of the school building, announcing “Fitzgerald is a Zombie.” At one point during a session with Terri, Fitzgerald puts his head in his hands on the desk and despairingly tells him: “You know sometimes I just think I should leave you kids on your own. The way these other kids treat you, maybe that’s preparation for the real world.”

Mr. Fitzgerald later confesses to Terri, “Life’s a mess, dude. But we’re all doing the best we can . . .  So if I hurt you or if I lie to you, all I can tell you is ‘I’m sorry.’ And I will try to do better. Maybe I will do better, or maybe I’ll do even worse. I don’t know. I screw up all the time. Because that’s what people do.” Jacobs’s tale of adolescence seems to suggest that, despite everything that happens, Terri does find some consolation. Mr. Fitzgerald may be a terrible role model on many levels, but Terri manages to learn from him, along with the other cast of misfits, including poor Chad.

Terri is not a tale of adolescent redemption. It resembles more honest films on the subject like Neal Jimenez and Tim Hunter’s River’s Edge or Antonio Campos’s Afterschool. Jacobs admits that he was more of a hardcore punk rocker in high school, which meant being “cowardly mean.” He told an interviewer at SXSW: “So, I don’t know, I’m not trying to make amends but it’s something that you think about as you get older . . . how you could have been nicer person.”