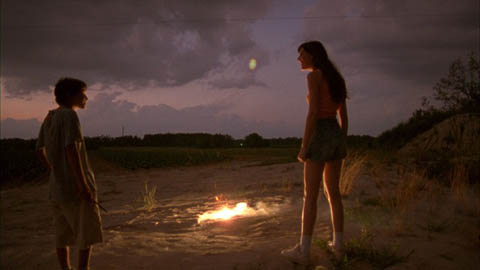 At last year’s Sundance Film Festival, the reviewer for the Hollywood Reporter wrote: “Experimental films at Sundance are not unlike the flu bugs that run rampant through the festival’s many crowded venues: They’re inevitable but to be avoided if possible” Even though the reviewer considered Jess + Moss to be an exception, he nevertheless qualified his response: “Not that its slow rhythms and intricate sight and sound design won’t tax the patience of those who trek here for celebrity sightings and the next hot film.” Why pander to the lowest common denominator? Clay Jeter’s Jess + Moss was not only one of the most imaginative films at the festival, but also of the past year.

Jeter’s poetic film has a skeletal narrative, but exults in stunningly rich visual details rather than a conventional plot. Jess + Moss tells the story of an unlikely pair: an 18-year-old female named Jess (Sarah Hagan) and her 12-year-old second cousin, Moss (Austin Vickers). The two misfits hang out together during the hot summer months on a red-dirt tobacco farm in western Kentucky. They race bicycles, shoot off fireworks, smoke cigarettes (Moss only pretends), jump on trampolines, climb on top of giant grain bins, and play games in a dilapidated abandoned farm house, reenacting scenes from their childhood.

Although Jess and Moss are incredibly close to each other, the sullen Jess sometimes gets frustrated with her younger cousin due to their age difference. Early on, Moss tries to interest Jess in getting some free school supplies without success. He tells her, “You need art supplies. Your pencil is almost gone. You have, like no paper left in that art book.” When he asks Jess what kind of job she’s going to get, she’s unsure, but Moss thinks that she should design tee shirts because of her artistic skills. When Jess in turn asks Moss about his future plans, he wants to become a farmer and drive a tractor like everyone else in his family. “You don’t have to do that,” she cautions, “You can do whatever you want to do. It’s your life.”

Both Jess and Moss remain strangely isolated from others, but share a special bond. Moss lives with his overly religious grandparents. He later satirizes them by playing a preacher, as Jess corrects his saying of “The Lord’s Prayer” before enacting her own Crucifixion scene. What happened to Moss’s parents remains an issue that the film returns to over and over again. Moss relishes having Jess repeat the story of how his parents died in a car wreck and that his pregnancy and birth were the happiest events of their shortened lives. After dinner, as Moss eats a purple Popsicle, his grandparents dance to Connie Francis’s version of “Tammy.” This is intercut with shots of Jess, wearing a brassiere and wig, as she smokes a cigarette and poses in front of a mirror that somehow conjures up David Lynch’s Mulholland Dr (2001).

Jess lives with her father, who seems aloof and distant. As she eats what looks like a TV dinner and stares straight ahead, he complains: “Don’t be fucking taking cigarettes anymore. You’re old enough to get a damn job . . . buy your own smokes.” Jess spends time listening to cassette tapes left by her mother. They offer Jess advice and explain why she decided to leave the family. Jess + Moss is obsessed with old technology in a way that’s reminiscent of Harmony Korine’s Trash Humpers (2010). The two characters listen to cassettes, as well as old records on a hand-cranked phonograph. In an effort to remember his past, Moss plays self-help tapes about improving his memory.

Despite its unconventional form, Jess + Moss still manages to be remarkably engaging as a poignant character study. Jess is pretty and has blue eyes, but she’s also tall and gangly, while Moss is short and much too young to be her companion. Jess knows this, of course, but this knowledge doesn’t prevent a repressed sexual undercurrent between them that’s palpable. As the film goes on, Jess only becomes more restless with her situation.

In one scene Jess questions Moss about his sexual experience – how far he’s gone with girls. He tells her he’s kissed one before, but when she mocks him for being in love with a younger girl named Haley, he adamantly denies it. As Moss takes a pee with his back to her, in voiceover he asks her what a dildo is. Jess insists that he’s much too young to know about such things, but when she explains that it’s a “substitute penis,” the two of them crack up. Moss and Jess have strange and intimate conversations, about such issues as longevity and the quality of life, including how long people should have to wipe your butt after you grow old. When they later dance together to an old record, Jess asks matter-of-factly, “Aren’t we supposed to dance closer?”

In another pivotal scene that takes place inside an old pickup truck in a barn while it’s raining, Jess takes off her wet blouse and suggests that they sit closer together for body warmth. She discusses the meaning of “Seven Minutes in Heaven,” which she describes to Moss as when a boy and girl go in a closed room and kiss or do whatever they want to do. Jess claims she’s done it before, but it’s clear that she’d also like to do it with him. Jess also remarks, “You think I’m crazy, don’t you? I know the difference between right and wrong,” as a worried look crosses Moss’s face. Nothing happens, but she later kisses him with intense affection when he falls asleep.

Despite her fondness for Moss, Jess is mean to him on several occasions. She locks him in the barn with Haley and shoots at one of his jars of moss and swamp water, the contents of which he continually investigates under a microscope. And when Moss storms into the room while she’s listening to her Mom’s tape on a huge boom box, their subsequent spat inevitably alters their relationship

Jeter reportedly began the film with a location, two performers, and over 30 different outdated film stocks. He then proceeded to develop the semblance of a story. He told an interviewer: “I had the outline for the story and often wrote on the day of shooting. There was never a full screenplay but just these pages of ideas.” Once production began, however, Jeter more or less discarded them in favor of a more improvisational approach. Much of the strength of the film derives from how the two performers, Sarah Hagen and the young novice Austin Vickers, inhabit their characters. The cinematography by Will Basanta is exceptional, while Isaac Hagy’s editing is impressive for the way he’s able to create a sense of fluidity between disparate scenes.

Mark Jackson’s Without, which I wrote about previously, is about digital memory. Clay Jeter’s Jess + Moss is another memory piece about the ache of loss and abandonment, but the analog version. The two main characters’ nostalgia for old technology is their desperate attempt to hold on to the past. Yet neither Jess nor Moss fully understands the ways in which the past can often haunt the future.

Jess + Moss will have a week-long theatrical run at the reRun Gastropub Theater in Brooklyn starting February 17. The film is currently available on VOD, while the DVD will be released in late March.