We Need to Talk about Kevin

We Need to Talk about Kevin 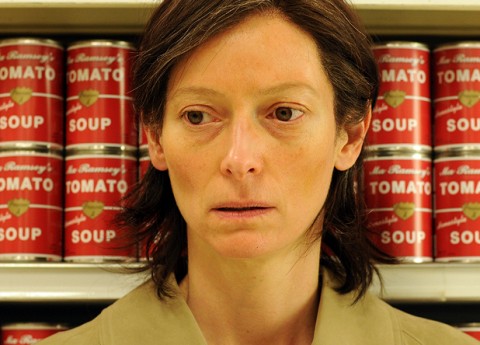 Most people don’t think twice about having children. That’s not exactly the case for Eva Khatchadourian (Tilda Swinton), a career woman and travel writer who decides to have a kid, but remains ambivalent. A potential parent might wonder: what if I don’t actually love my child, or what if he or she doesn’t love me? But Scottish director Lynne Ramsay’s film, We Need to Talk about Kevin (2011), takes it a step further. She interrogates the more seldom-thought possibility: what if my kid turns out to be a sociopath? There have been other films that have dealt with teenagers who ruthlessly slaughter their classmates, such as Ben Coccio’s Zero Day (2003) or Gus Van Sant’s Elephant (2003). The former portrays the perpetrators, while the latter focuses more on the victims. Yet Ramsay filters her film through the mind of the perpetrator’s mother, portraying it as a kind of unfolding horror story that begins at birth.

Ramsay’s film fractures the narrative by employing a type of associational logic. It parcels out information relating to the inevitable carnage at school, while withholding the actual details until the very end. The film instead focuses on Eva’s tenuous psychological state in the traumatic aftermath of the event: the red paint that’s been splattered on her ramshackle house and car windshield, the hard stare of the neighbors, a physical assault on the street, the perils of shopping at the local grocery store, the difficulty of finding a job, and the utter isolation at work that comes from being stigmatized. When one of her co-workers at the travel agency, where Eva finally lands a job, asks her to dance at a holiday party and she politely refuses, he quietly snarls, “Where do you get off, you stuck-up bitch. Do you think anyone else is going to want you now?”

While driving home one night, someone in an ape costume approaches her car from the driver’s side and a skeleton and other masked figures scamper in her path. What appear to be frightening fantasies turn out to be merely kids in costume on Halloween, but daily life for Eva is filled with real demons from both the present and the past. When she visits Kevin in prison, he bites his finger nails and places them in a row in front of her while not bothering to speak. As he glowers at her, she clearly must wonder how the trajectory of her life caused her to wind up in this predicament. Yet Ramsay reinforces the connection, as their faces merge while she washes her face.  The director told Eric Kohn in Indiewire: “By proxy, she has murdered all these people. It’s really exploring the psyche of a woman who has this massive guilt.”

As the film flashes back, Kevin cries incessantly as a baby, initially doesn’t speak, refuses to be potty trained, and gradually becomes openly hostile to Eva. Her husband, Franklin (John C. Reilly), a cuddly bear of a guy, is a study in denial. Kevin favors his father, who shows him more affection, but doesn’t hide his loathing for his mother who remains defensively distant. Franklin insists that they move out of the city to the suburbs, so that Kevin will have more space and access to better schools, which only alienates and isolates Eva even further. It does nothing for Kevin, except that it allows him to take up archery, a sport he seems to relish after becoming fixated on a passage from Robin Hood that his mother reads to him.

When Eva and Franklin unexpectedly have a second child, Celia (Ashley Gerasimovich), they dress Kevin in a shirt that says “I’m the Big Brother.” He’s not a protective older brother but a menace, as he immediately makes the baby cry. Sure enough, several years later, the sweet little girl finds her hamster missing and then suffers an eye injury that Eva suspects has been caused by Kevin. When his father suggests that Kevin look out for Celia at school, the teen responds, “You don’t really remember being a kid much, do you, dad? Celia’s just going to have to suck it up.” When Eva tries to relate to Kevin by taking him out to dinner, he stuffs himself beforehand. As they sit together in the restaurant, she’s forced to eat alone.

Ramsay, who along with Rory Stewart Kinnear, adapted the screenplay from Lionel Shriver’s 2003 novel, deviates from employing any sort of conventional linear storyline by creating an impressionistic film that scrambles time. Images fade in and out of focus, sounds become amplified, while the film conveys Eva’s feelings of guilt and repulsion in an almost visceral way, which is reinforced by the film’s excessively red palette.

In an early scene of La Tomatina, a Spanish tomato festival, a mass of semi-naked bodies sway amidst a tomato throwing contest. In one image that appears to be in her dream, we see an ecstatic Eva lifted, Crucifixion style, above the crowd before being splattered in thick red sauce. The image becomes a kind of metaphor for the horrific violence soon to come, as indicated by the repeated shots of flashing lights and anxious parents outside a school that appear several times throughout the film.

We Need to Talk about Kevin does not really attempt to offer insight into Kevin’s behavior. Erza Miller, with his good looks and cocky swagger, does his best to deny viewers any semblance of empathy. Somewhat strangely, we don’t feel sorry for Eva either. As played by Tilda Swinton, there’s a decided lack of emotion to her character as she bravely soldiers on, despite everything that’s happened.

We Need to Talk about Kevin, which is being distributed by Oscilloscope Laboratories, opened Friday at the Sundance Cinemas here in Madison, where it is scheduled to play for the rest of the week.