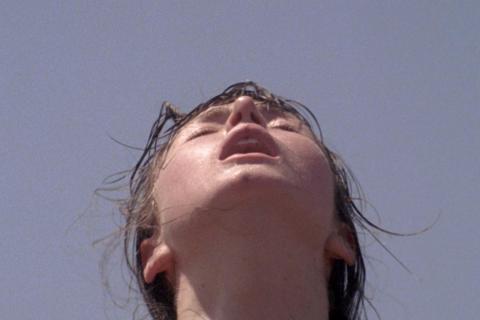 Indie actress and producer Amy Seimetz’s first feature Sun Don’t Shine (2012) received considerable buzz when it premiered at the SXSW Film Festival in March. Given Seimetz’s acting background, it might be expected that the film would contain terrific performances, but, for me, the real surprise turns out to be the film’s assured and poetic visual style. Sun Don’t Shine (you have to love the title) is a character study – a film noir-like road movie set in the intense heat and blazing sun of the filmmaker’s home state of Florida. Seimetz has indicated that the genesis of the film was a dream, so it’s little wonder that Sun Don’t Shine, which plays with a number of different genres including suspense and horror, feels very much like an extended nightmare.

The film begins with a shot of a young woman aptly named Crystal (Kate Lyn Sheil). Her head jerks up into the frame against a pure blue sky, as she frantically gasps for air. She’s in the midst of a violent scuffle with a young construction worker named Leo (Kentucker Audley). As she slaps and flails at him with dogged intensity, he defends himself by throwing her in the mud, knocking her down, and then shoving her up against the car. “We don’t need to keep talking about this,” he tells her, “but we need to keep going.” Once they’re in the car, he tries to placate her with a kiss, but she accuses him of trying to strangle her. After a long stare, he apologizes for breaking her cell phone. Crystal takes off her blouse, dangles it out the window like a homemade kite flapping in the breeze, before eventually letting go of it.

It soon becomes obvious that the pair are in some type of deep trouble. We’re not sure exactly why, but it’s clear that Crystal is not really helping the situation. Leo insists that they need to visit his friend Terry’s bar – a four or five hour drive away. Crystal becomes jealous and accuses Terry (Kit Gwin) of being his girlfriend, which he denies. Once in the car, she wants to go to a motel room and make love to Leo. He’s in a state of panic about the situation, and ignores her attempts at seduction. There’s something very child-like about Crystal’s responses – she appears to be regressing under the pressure and weight of events. She insists that he doesn’t want to make love to her because she has a daughter and big hips, while Leo tries his best to ignore her remarks.

As they argue, things get even more tense when their car overheats on the sweltering highway and an overzealous Good Samaritan (AJ Bowen) insists on helping them, despite Leo’s protestations and attempts to get rid of him. As the film progresses, we learn incremental details of the missing back story, after strong clues are revealed in the glove compartment and the trunk of their car. I’m not sure whether it ruins the film to know what has set this reckless couple on their road journey, but I won’t say any more. Sun Don’t Shine contains a skeletal plot, but that’s much less important than the interaction between the two main characters, which develops into an intense psychodrama.

Kate Lyn Sheil has appeared in a number of recent indie films previously, including Alex Ross Perry’s The Color Wheel, Sophia Takal’s Green and Joe Swanberg’s Silver Bullets and The Zone, but this strikes me as her best performance to date. Her character becomes increasingly unglued as the film moves forward, causing multiple personalities to surface: an obsessed lover, a little girl with a love of mermaids, a highly jealous seductress, a liar, and a pretty scary person. There’s something about how seamlessly she transforms into so many different people that’s very unsettling, as if reality can shift on a dime. At one point, she shares her improbable fantasies of their future life together. She tells Leo, “I want to go on a boat with you, or an airplane.” When she looks forward to the two of them going grocery shopping together, Leo asks: “What made you think of that?” She responds: “Boats?”

Crystal begins to read off the names of the various motels as they drive past them and reminisces about a mermaid theatrical show she saw as a child, as we see images of various motels, a peacock, and dazzling shots of fish and mermaids swimming underwater. As she continues to read the signs, Leo finally asks her to stop. She doesn’t, but exults in a motel that happens to bear her name: Crystal Palms. But once they arrive at their destination, she becomes even more sullen, as jealousy kicks in, which is initially conveyed through close-ups on her face and very subtle movements of her eyes. Leo’s attempts to help Crystal seem noble at first, but he has his own demons, which are only revealed once the two of them arrive at Terry’s house.

After a highly revealing sex scene, Leo insists that they go to the bar. Once there, Crystal tells him a convoluted story about a co-worker who stole her lipstick, but Leo simply gets up and goes to the bar for a whiskey as she trails after him and tries to finish her story. He again walks away from her over to the jukebox, but she follows and comes on to him as if nothing has happened and pretends to be picking him up for the first time. The scene suddenly becomes highly stylized as a result of colored gels. As country music plays softly in the background, you suddenly want to believe in their relationship, as they walk out of the bar with their arms wrapped around each other and their shadows reflected on the green grass.

Sun Don’t Shine recalls a number of other movies – from Barbara Loden’s Wanda (1970) and Terrence Malick’s Badlands (1973) to Kelly Reichardt’s River of Grass (1994), but it only resonates even more as a result of the references it conjures up for the viewer. With an economy of means, Seimetz is able to create a remarkable degree of suspense. The film, which was originally shot in 16mm by cinematographer Jay Keitel, also contains lyrical and abstract passages that were shot both outside and inside the car. Early on, as it rains and the inside of the car steams up, Crystal draws a heart on the front windshield that slowly fades in the light. When Leo later drives off alone to rendezvous with Terry, the car lights illuminating the inside of the tent gradually dim and then disappear, turning Crystal’s sad face into a dark silhouette.

In Amy Seimetz’s haunting debut feature, Sun Don’t Shine, geography and climate impact the core of its characters, suggesting that Florida is really a state of mind. Sadly, it’s not love that binds these intimate strangers together, as they desperately try to navigate their troubled lives in a vast landscape of swampland under the harsh summer sun. Rather, it’s a sense of mutual blame.