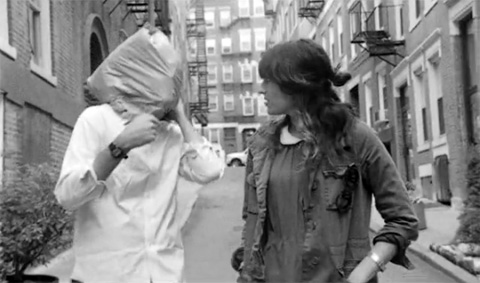 Alex Ross Perry’s sophomore feature The Color Wheel (2011) has a tendency to polarize critics – sometimes even the same critic, as if he or she might be suffering from bipolar disorder. The film comes at you with a certain velocity – often from left field. At times it shocks by being in-your-face politically incorrect. Yet The Color Wheel exudes a certain shaggy dog charm, even as it deliberately attempts to disturb and provoke viewers. It bills itself as an “objectionable comedy about disappointment and forgiveness.”

The Color Wheel tells the story of an estranged brother and sister, Colin (Alex Ross Perry) and JR (co-writer Carlen Altman) who go on a road trip together, ostensibly to retrieve some of her belongings from her Journalism professor (Bob Byington) with whom she’s had, as far as the family is concerned, a rather scandalous affair. Colin’s girlfriend, Zoe (Ry Russo-Young) questions why he would even bother to help his sister. He responds: “You know, you don’t have any siblings, so you have no frame of reference for what it’s like when one of them asks for a favor.” JR is apparently the black sheep in the family. At least Colin, for his own personal reasons, chooses to portray her that way. This is a case of sibling rivalry that, considering that they’re now in their twenties, seems mired in adolescence. Throughout their road trip, the two of them constantly bicker like a couple stuck in a bad marriage without a divorce option.

JR is something of a mess. Although very attractive, she has low self-esteem. Her aspirations to be a TV anchor lead her to have an affair with her professor, who belittles her for being incredibly immature when she and Colin finally show up at his house to retrieve a couple of boxes of her stuff. She ridicules him for not helping her get a job in the business as promised, while he berates her for never picking up the check at a restaurant. When JR later spots a television personality at a diner, she makes a complete fool of herself by seeking career advice. The woman tells her bluntly: “You know, off the top of my head, don’t interrupt people while they’re eating.” JR is later lured to a party of her snotty old school chums by the prospect of meeting an agent from Los Angeles. After she’s grilled about her career aspirations, JR fibs that she’s actually working as a nurse while auditioning for jobs in major markets. As she performs the role of being a news anchor for several of her former classmates, she proves to be quite terrible by continually flubbing her lines.

On the car trip, Colin gloats over the fact that his parents took him on a vacation to Puerto Rico and didn’t invite JR. It’s later revealed that the family also neglected to inform her about an aunt’s death, lest she might actually turn up at the funeral. Like the Journalism professor, Colin uses language to bludgeon her into submission, but, like a carnival knockdown doll, she keeps popping back up. If anything, JR’s resilience is her major strength. Although Colin relishes his superior position, he has his own serious flaws. For one thing, his writing career apparently isn’t going anywhere either. Both at the professor’s house and party, he rather quickly winds up crumpled on the floor – if he were a boxer, he’d be hitting the canvas before his opponent even threw a punch. He’s also been in a loveless relationship with Zoe for several years, and has his own sexual frustrations, as evidenced by the hand job he angles for and doesn’t receive before embarking on the trip.

Shot on grainy black-and-white 16mm film by Sean Price Williams, The Color Wheel is essentially a highly complex character study that takes the form of a road movie. Colin and JR stay overnight at a motel run by a religious zealot, visit the professor’s house, party with old classmates, and finally take a detour to a relative’s nearby cabin. It’s a journey of mutual self-discovery, but one that’s steeped in humiliation. Their trip involves a sudden realization that their dreams are not exactly working out as planned. This becomes apparent at the party, where Colin shows up carrying a pineapple and the two are quickly relegated to pathetic comic figures. Although the film was apparently fully scripted, the constant banter between JR and Colin feels completely natural, as if invented on the spot. Colin’s spiteful condemnation of JR and her failings stems from his own insecurities that are as vast as hers. And while the barbed exchanges between them are often very funny, the result is actually the kind of laughter that hurts.

Alex Ross Perry’s The Color Wheel cuts much deeper than most independent films, which is its major strength. Although the clues have been carefully planted, the extended climax, which lasts for nine minutes, nonetheless packs the wallop of a perfectly executed sucker punch.

Postscript: I first saw The Color Wheel at the 2011 Wisconsin Film Festival last April. It opened last week at the BAMcinématek and is currently playing at the Cinema Village in New York before screening at other theatrical venues around the country.