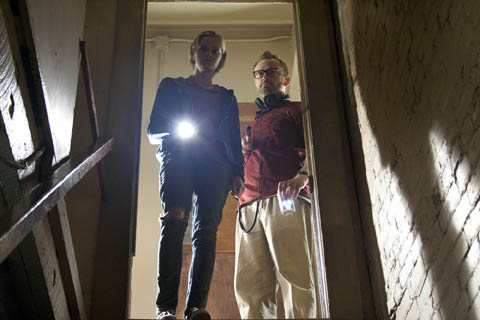 In shooting the horror film, House of the Devil (2009), Ti West and his crew stayed at a historic 19th century hotel called the Yankee Pedlar Inn in Torrington, Connecticut. When a big studio ghost movie West was scheduled to direct fell through at the last minute, this location became the inspiration for his own low-budget one. The resulting film, The Innkeepers (2012), uses the architecture of the sprawling hotel – its long corridors, maze-like staircase, and pitch-black, cavernous basement – to create a sense of suspense in telling the story of two slackers who work at the haunted hotel.

Ti West has become one of the leading young indie directors making horror films today. What distinguishes his work, especially The Innkeepers, is his concern for rich characterization, as well as the intriguing ways he riffs on the genre. The film has a formal elegance, which is evident in how West deals with the location spatially through careful framing and mobile camera work. The opening credit sequence contains a montage of historical photos of the interior and exterior of the hotel, set to a Bernard Hermann-like score by Jeff Grace. The film is divided into chapters, conveyed through titles that suggest silent cinema.

In a high-angled wide shot, a young woman, Claire (Sara Paxton) walks toward the imposing building. It’s the final weekend before the hotel is scheduled to go out of business. As Claire hangs up her winter parka, her co-worker, Luke (Pat Healy), saunters out, eating a stick of beef jerky. He says ominously, “So this is it, huh, just you and me . . . end of days?” Shortly after this, Luke insists he has something to show her on his laptop. As she stares at the screen and the camera moves in on an image of an empty rocking chair, Claire receives a scary jolt, which causes her to gasp for breath and reach for her asthma inhaler. West shows that he knows how easy it is to frighten an audience with cheap tricks, but the relationship between the two of employees is really what lies at the heart of The Innkeepers.

The contrast between them can be seen in their hairstyles. The older Luke sports a huge curl on top of his head that makes him look like a Kewpie doll, while Claire’s short blond hair is chopped off unevenly, as if someone gave her a haircut using garden shears. Luke is passive-aggressive. He concocts paranormal experiments involving evp recordings for the benefit of Claire, whom he secretly has a crush on. At the same time, in his dealings with her, he tries to hide this as best he can by adopting a cynical and grouchy veneer. He also gets his rocks off by constantly scaring her, so that he comes across as an annoying older brother.

When a well-known TV and film actress, Leanne Rease-Jones (Kelly McGillis), checks into the hotel and Claire gets overly excited, Luke appears to be indifferent. He shoves her hotel receipt at Claire disdainfully, and says, “Well, here’s your autograph, just relax.” But right after that, as she optimistically details her desire to make contact with ghosts on this final weekend of the haunted hotel, he gawks at her, as if moonstruck.

Claire’s relationship with the actress is equally conflicted. When Claire delivers towels to her room, an arm sticks out of the bathroom door, as the hotel worker swoons from such close proximity to a celebrity. The actress then seductively steps out from the shower with only a towel wrapped around her. “I’m a really big fan of yours,” Claire suddenly blurts out. The actress asks, “And what do you do?” The question causes panic in Claire, who stammers, “I’m kind of like, you know, in between stuff.”

Claire becomes distraught over the interaction, and admits to Luke, that “She kind of made me feel like an asshole.” Claire asks him, “Why do people have to have such high expectations?” He responds, “Everything happens for a reason, Claire. Nobody just ends up at the Yankee Pedlar.” That fatalistic comment might serve as the film’s mantra, especially once Claire becomes obsessed with finding the ghost of Madeline O’Malley, who committed suicide at the hotel and now haunts the place.

Leanne Rease-Jones turns out to have forsaken acting and is now a clairvoyant. Virtually everything she says is loaded with innuendo. Brandishing a crystal pendulum, she warns Claire, “You mustn’t go down into the basement,” before suddenly becoming evasive. Yet what good is it to foresee the future if you can’t do anything to change it? It’s the hotel’s third and final guest – an old man (George Riddle) with the craggy face of a walrus and a voice from the crypt – who ultimately sets the film on the path to horror. For nostalgic reasons, he insists on staying in the honeymoon suite on the closed third floor despite the fact that the room no longer has any furniture other than a bed.

If horror remains the main attraction of The Innkeepers for most viewers, the film exhibits a great sense of humor, so it’s not surprising that West refers to it as “a charming workplace comedy,” in which the horror element “kind of raises the stakes.” At one point, as she works the night shift, Claire becomes so frightened that she awakens Luke, but when he finally invites her into his room and she glimpses him in his underwear, she suddenly has second thoughts. Lena Dunham also makes a cameo as a barista with boyfriend issues. After Claire returns from her trip to the coffee shop minus a latte, Luke asks, “Does that annoying girl still work there?”

It’s hard not to chuckle throughout The Innkeepers at the witty dialogue and all the odd little details of characterization. True horror fans might be disappointed with West’s more classical and stylized approach to a ghost movie and references to Stanley Kubrick’s The Shining (1980), but the film’s real innovation lies in the clever ways it deliberately plays against the more clichéd expectations of the genre.