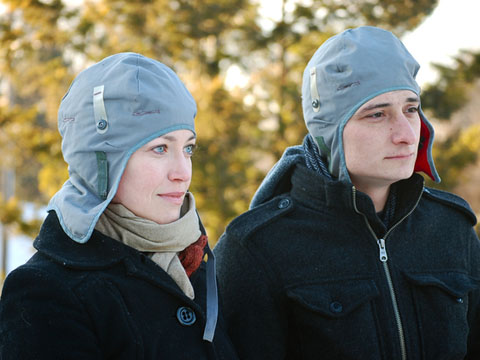 Although hardly unknown within indie film circles, the films of Frank V. Ross remain under the radar for more mainstream audiences. His new film, Tiger Tail in Blue (2012), represents his seventh feature since 2000, yet Ross, whose films have been associated with those of Joe Swanberg and Andrew Bujalski, has had trouble getting his films distributed more widely, despite playing at SXSW and other notable venues. Hopefully this is about to change. Tiger Tail in Blue was nominated for the “Best Film Not Playing at a Theater Near You” Award at the recent Gotham Independent Film Awards, and rated number five on the “Best Undistributed Films of 2012” list on Indiewire.

While showing similarities to films associated with mumblecore, Ross’s work mines somewhat different territory. In contrast to fellow Chicagoan Joe Swanberg, for example, Ross carefully scripts his films, even though they might easily be mistaken for being improvised. If early mumblecore films dealt with the confusion of twentysomethings jumpstarting their adult lives, Ross’s characters seem to be a very different breed. They are less urban hipsters in a transitional stage of life than young, working-class suburbanites, who find themselves already trapped in humdrum lives and less than satisfying routines. They accept their fates with a certain resignation, yet feel stymied and unfulfilled as they struggle to make ends meet in a world of diminished prospects.

In Hohokam (2007), which is set in sweltering Phoenix, Anson (Anthony J. Baker) is an ex-marine working as a laborer, while his girlfriend Lori (Allison Latta) is stuck in a cramped office cubicle where she haggles on the phone with customers about their late medical payments. Anson has aspirations to start a restaurant or a car wash, but it’s not clear that he has the necessary drive, skills or luck to make that happen. To make matters worse, even Lori has her doubts. In Audrey the Trainwreck (2010), Ron Hogan (Baker), works as a purchaser for an ATM parts company, while the new girlfriend he meets on an Internet dating site, Stacy (Alexi Wasser), delivers parcels. It turns out that Ron hates his job, but can’t admit it to himself. In fact, he’s already secretly counting the days to early retirement (the working class dream), even though he’s only been employed there for three years.

If dead-end jobs largely define the worlds of Ross’s characters, they also consume so much of their lives that they don’t have much time for leisure. But the characters also appear to live in a cultural and artistic vacuum. In Hohokam, Anson and Lori decide to go out on the town and do something, but they are somewhat at a loss to figure out what that might be. For lack of anything better to do, they end up visiting the local zoo. In Audrey the Trainwreck, Ron spends time in coffee shops and dark bars. Beyond that, he plays volleyball with co-workers, while Stacy attends a bridal shower. The main characters in Tiger Tail in Blue go sledding down a not-very-steep hill.

What’s unique about Ross’s films is the way he deliberately eschews classical narrative. There’s no catalyst or inciting incident 10 or 15 minutes into the film to propel the story forward. In fact, there’s not much story per se. Viewers expecting a dramatic premise might question exactly what it is they’re watching. Yet Ross merely has a different agenda. He’s less interested in story conventions than in exploring the boundaries of narrative. At times, he even teases viewers by playing with their expectations. There is Anson’s gun, Lori’s flirtatious officemate, and another co-worker named The Jeffery (Joe Swanberg), who weasels a ride home from Lori early in Hohokam. Plotwise, these all turn out to be red herrings. In Audrey the Trainwreck, Ron’s roommate, Scott Kaniewski (Danny Rhodes) appears to have a crush on him, but this doesn’t lead anywhere either, and is treated as a simple fact of life. If there’s a story there, Ross chooses not to tell it.

Ross seems to exult in chronicling the ordinary or the mundane. He gives equal weight to what would be excluded in most other films: bodily functions, pumping gas, office rumors, a phone call from a child that turns out to be a wrong number, breaking a favorite coffee mug, an older couple dancing in a restaurant, the surprise of getting a buffalo head nickel, the pleasure of a doughnut break or eating ice cream, the annoyance of cell phones, or a bad case of shingles. Ross’s characters talk very matter-of-factly, even provocatively, about sex, but the erotic pleasure appears to be more in talking about it – the possibility of sex – rather than actually engaging in the act. Any declaration about making love becomes an empty threat.

The sense that Ross’s characters feel trapped in their suburban lives and by jobs that “suck the life out of them” probably accounts for the fact that they get easily annoyed by little things. Ron gets upset about restaurants that claim to have the best hamburgers; the bride-to-be complains to Stacy about a parent interfering with her wedding plans. Chris in Tiger Tail in Blue gets irritated by older folks who call him “dude,” while Brandy’s roommate, Leonard (Baker), is convinced that reality television is making kids stupid. Scott launches into a long tirade, lasting several minutes, about security screenings of children at airports. He insists he’d rather be blown up than subjected to such “indignities.” “Just agree with me,” Scott heatedly vents to Ron, “that kids taking off their shoes at airports equals a shitty world.”

Ross’s characters also tend to have very short fuses. Lori and Anson get into an argument over an offhanded racist comment. Lori’s failure to approve of Anson’s choice of clothes leads to a blowup that causes her to storm out of the house. During a game of volleyball, Ron angrily throws the ball at his co-worker Jeremy (Swanberg) after he slips on water that Jeremy accidentally spills on the court. Ron argues with Scott, and also gets into an altercation at the local bar with a smug contractor named David (Nick Offerman), who belittles the significance of Ron’s line of work. It’s the kind of situation we fully expect will escalate into a fistfight, but, in this case, David’s wife wisely intervenes before the two come to blows.

Ross’s films present slices of life rather than conventional narratives. They are not easily summarized or explained. In some sense they are character studies of couples. Anson and Lori seem to be a mismatched pair. They don’t have very much in common, and she finds it weird that he walks around with a loaded gun. In fact, Lori seems to share greater camaraderie with her gay friend, Guy (Rhodes) than with Anson. Audrey the Trainwreck explores the life and frustrations of a single guy who’s starting to get up there in age, but is still on the prowl, painfully aware that the clock is ticking and his prospects are narrowing. Tiger Tail in Blue examines the pressures of everyday life on a young married couple in suburban Chicago.

Tiger Tail in Blue feels less angry than Ross’s previous films. If Audrey the Trainwreck accentuates warmer, yellow and orange hues, Mike Gibisser’s assured cinematography gives the new film a cooler, bluish look, as befits the melancholic mood suggested by the title, and which is reinforced by the jazz score by Mike Medeski and Chris Speed. Ross has always excelled at getting strong naturalistic performances from his actors, and Tiger Tail in Blue uses an ensemble cast – Ross himself and Rebecca Spence, along with Megan Mercier and Anthony Baker in a cameo – to great effect. Ross continues to be the master of throw-away lines. If the anger has dissipated somewhat, it nevertheless lurks just under the surface, so that Tiger Tail still retains its edge. Ross is keenly observant of human behavior. The simplicity of Tiger Tail turns out to be a deceptive mask.

In Tiger Tail in Blue, Chis (Ross) is an aspiring writer, who also works nights as a waiter, while his wife, Melody (Rebecca Spence), is a high school teacher. As a result of their conflicting schedules, the two hardly see each other. Melody is already asleep by the time Chris gets home, which puts strain on their love life. Not only do their different work schedules create enormous tension between them, but Chris also flirts with a co-worker named Brandy, which causes him to linger at the restaurant even longer. Melody resents Chris’s aspirations to be a writer, especially because it affects them financially. To her, his pursuit of writing is a luxury they can’t afford. When Chris is late coming up with his share of expenses, it leads to a spat. They also get into an argument later when Chris needs Melody to give him a ride home after he has his eyes dilated. Melody’s resentment becomes evident when she refers to their health insurance as “my” insurance. She’s the one who has the job with benefits, even though she might not be able to keep it long-term.

Ross’s films have cryptic titles. They don’t actually describe the films they represent, but rather resonate in idiosyncratic ways. Hohokam suggests that Phoenix is less a mecca for young singles than a dying civilization. Audrey the Trainwreck refers to a drunken woman on the dance floor that Scott describes to Ron, while Tiger Tail in Blue alludes to the type of doughnuts that Chris and Melody eat on the street. For this couple, stopping for doughnuts represents one of the few pleasures in life that breaks the monotony of their daily grind. Ross’s films usually incorporate unexpected elements. In Tiger Tail in Blue, the film’s naturalism is confounded by the fact that Spence plays not only Chris’s wife, Melody, but also Brandy, the waitress with whom he works.

While this is initially confusing, a different actress (Megan Mercier) takes over the role at two crucial points in the film. The first occurs when Melody pays an unexpected visit to the restaurant; the second happens when Chris comes over to Brandy’s house to borrow a CD. Ross is not the only filmmaker to cast the same performer in different roles, but a viewer might question why he employs this unusual strategy here. Ross’s point seems to be that Chris’s feelings toward Melody and Brandy are tempered by the situation. Work allows Chris and Brandy the space to enjoy each other’s company, whereas the responsibilities of marriage conspire to snuff out the spark of romance between Chris and Melody.

Ross, in fact, states it bluntly in an interview with Hammer to Nail: “I mean, romance goes away at a certain point. You displace your feelings after a certain amount of time, it’s kind of like, ‘Oh wasn’t it fun when we did this?’ But it’s a new relationship now, and if you can’t enjoy it, you’re going to, you know, do what happens in the movie.” The film’s loopy song-and-dance number perfectly embodies Chris’s personal dilemma. A curious amalgam of a Fred Astaire and Ginger Rogers musical and a John Wayne western, the scene is so playful and exhilarating that its tonal shift catches us completely by surprise.

Along with Amy Seimetz’s Sun Don’t Shine (which was just acquired by Factory 25) and Dan Sallitt’s The Unspeakable Act, Tiger Tail in Blue strikes me as one of the best indie films to surface in the past year. The film will play at the Gene Siskel Film Center in Chicago later this month and at the Wisconsin Film Festival in April.