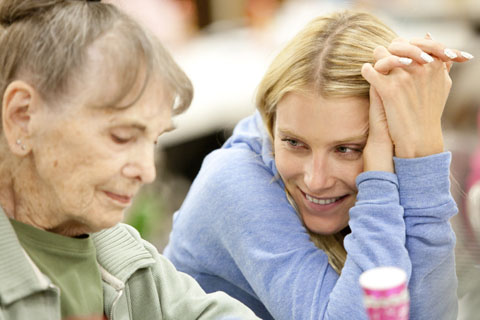 Starlet, Sean Baker’s fourth feature, is his most successful to date. Baker’s last two films, Take Out (2004) and Prince of Broadway (2008), took an ethnographic approach toward their subjects. Take Out (co-directed with Shih-Ching Tsou) delves into the world of Asian illegal immigrants by focusing on a home delivery person indebted to loan sharks, while Prince of Broadway is a portrait of a West African street peddler who sells knock-off merchandise and gets a baby dumped on him unexpectedly. Starlet again deals with characters living on the margins. The film tells the story of an unlikely relationship between a young woman in her early twenties and a gruff woman in her mid-eighties, following the purchase of an item at a yard sale. Baker’s new film also contains an ethnographic element, but that is not readily apparent at first.

Jane (Dree Hemingway) lives with two roommates, Melissa (Stella Maeve) and Mikey (James Ransone) in the San Fernando Valley, along with her male Chihuahua incongruously named Starlet. Melissa is an airhead and basket case who likes to get high all the time. Mikey apparently deals drugs, but also has other sidelines. Neither of them is terribly likeable. It is especially hard to care much for Melissa after she tries to get Starlet high by blowing smoke in the poor dog’s face. If we take a liking to Jane, much of it has to do with her genuine affection for her small companion.

The plot initially centers on a thermos that Jane buys from an elderly woman named Sadie (Besedka Johnson). After initially mistaking it for an urn and deciding it would make a great flower vase, Jane discovers that it contains rolls of cash that amount to roughly $10,000. This causes a personal dilemma, along with myriad questions: Should Jane return the loot to the old lady? Where did Sadie get the money? How did it get in the thermos? The discovery creates an alluring mystery, but, as Starlet slowly unfolds, more mysteries abound.

Jane tries to solve the initial one by getting to know Sadie, who rebuffs her awkward attempts at friendship. The fiercely independent old lady is suspicious of Jane, and only wants to be left alone. In her obsession to find answers, Jane begins to stalk Sadie. She disperses Sadie’s cab outside the grocery store, so that she can give her a lift home. Once inside her house, Jane tries to strike up a conversation by asking the perplexed woman what she does for fun. When Sadie indicates that she likes to play bingo at a local church, Jane turns up there as well. After Sadie’s cab disappears once again, Jane gives her another ride home, but this time the elderly woman retaliates.

The rift between them is short-lived when Sadie calls Jane and apologizes. As the two resume their tentative relationship, Sadie gradually reveals aspects of her life to the inquisitive young woman, including details about her deceased husband, who was a gambler, and her love of Paris. It’s more than the mystery of the money, however, that Jane seeks. She seems to be a lost soul, who has little else going for her. One afternoon, while they are together, Jane gets a phone call from Melissa, who is experiencing a meltdown, which brings the two plotlines together.

There is a later scene at an adult entertainment expo, where Jane appears with a stack of her sex videos and has pictures taken with fans. Her boss, Arash (Karren Karagulian), talks about breast implants being the next step for her, but Melissa (who’s been “frozen” for a month for bad behavior) and Mikey crash the event, causing a major ruckus. After banishing them, Arash tells Jane, “That girl is bad news. I don’t want to see you with her.” Jane responds quizzically, “I live with her.” Arash snaps, “So don’t live with her anymore.”

Given the impersonal world that Jane inhabits, it’s no wonder that Sadie seems a welcome respite, even if Sadie can be remote and easily irritated. Baker manages to get arresting performances from the entire cast, but especially from the chemistry between Dree Hemingway and first-time performer, Besedka Johnson. Hemingway, with her lanky frame, seems to regress in the old lady’s presence, so that she appears to revert to a confused teen rather than young adult, while fissures appear in Sadie’s armor, before the mystery behind her character eventually is revealed.

Baker shot Starlet in actual locations connected to the adult film industry. The setting, however, provides more than just an intriguing backdrop to the story. It actually provides a crucial context for establishing the relationships between Jane, Melissa, Mikey, and Arash,as well as the motivation behind why Jane might be drawn to someone like Sadie. The film is, at heart, a fascinating character study, even if the screenplay (which Baker co-wrote with Chris Bergoch) contains more plot than is usually found in a Sean Baker film.

Starlet has a somewhat languorous pace compared to his previous films, but Baker has an innate feel for when to cut scenes. The cinematography by Radium Cheung captures the muted tones of the Valley, so that the colors, like the characters, appear to be washed out by the perpetual sun. In exposing the less glamorous underside of this social milieu, Baker shows how it affects young women, who get trapped emotionally in what he describes as a kind of dependent “pre-adolescent environment.” We come to see that, like her dog, Starlet, Sadie represents a kind of desperate lifeline for Jane.