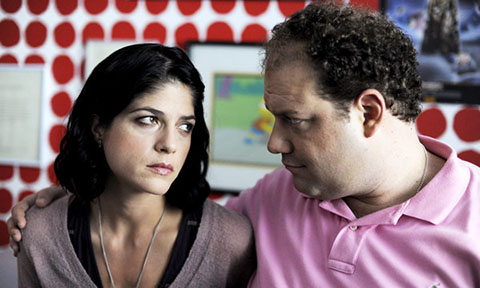 Todd Solondz’s career started with such a bang that it’s pretty shocking that his latest film, Dark Horse (2012), struggled to gain a theatrical release. Solondz no doubt bears some responsibility. The difficulties can be traced back to his decision to make the controversial Happiness (1998) following the breakthrough success of his second feature, Welcome to the Dollhouse (1995). Solondz recently commented: “A lot of doors opened after Dollhouse, and I suppose by writing this script I knew I could close a lot of them and see who was left standing.”

The gamble profoundly affected his career. Solondz chose to make pedophilia the focus of Happiness and persisted in sticking with this subject matter. His last film, Life During Wartime (2010), returned to the same characters, Bill Maplewood and his son, Billy, so it should not come as much of a surprise that Solondz’s box office appeal might suffer as a result, even though Life During Wartime is one of his best films.

Dark Horse moves away from contentious subject matter, yet the film’s protagonist, Abe Wertheimer (Jordan Gelber), is as self-delusional as any other Solondz character. Rather than seeing himself as a loser, Abe, overweight and in his 30s, clings to the notion that he’s merely a “dark horse,” a come-from-behind kind of guy whom everyone underestimates, but who will eventually triumph. Despite the skewed inner script he’s following, Abe secretly knows that he’s a failure. In a series of recurring dreams or fantasies, his co-worker, Marie (Donna Murphy) serves as a reality check throughout the film.

Dark Horse begins with spirited dancing at a Jewish wedding to music by Kid Sister. Dressed in a tuxedo, Abe sits next to a woman with barely a pulse, named Miranda (Selma Blair). As the dancers are reflected in the mirror behind them, Abe leans over and announces brashly, “I don’t dance. It’s not my thing.” Miranda moves closer, looks at him quizzically, but doesn’t answer. He nevertheless chases her down at the coat check room as she’s leaving in order to get her phone number, which she only gives him with great reluctance.

Abe’s yellow Hummer, blaring loud pop music, pulls into the driveway of a suburban house, where Abe still lives with his parents, Jackie (Christopher Walken) and Phyllis (Mia Farrow). As he enters, he ignores his mother’s greeting, as she and her husband silently watch TV in the parlor. It turns out that Abe also works in his father’s real estate development firm, where Marie perpetually covers for him, and a cousin named Justin (Zachary Booth) sucks up to his dad. Rather than doing the spreadsheets his father impatiently waits for, Abe buys action figures on the Internet.

Abe interrupts a game of backgammon with his mom to make a date with Miranda, who hangs up before he can arrange the time. When he arrives at her house with a bouquet of flowers, she’s not there, of course, so he is forced to sit with her skeptical parents before Miranda eventually arrives. As she smokes a cigarette on the back porch later on, Abe demonstrates his lack of social skills by discussing a friend’s testicular cancer. He also brags about having a high sperm count and insists on the importance of numerology. “Dates and Numbers have to be right,” he tells Miranda, before he impulsively asks her to marry him.

Defeat is manifest in Abe’s downtrodden gait when he returns home and again ignores his mom. He mopes at work the next day, fails to provide the needed spreadsheets, and quits his job in a loud argument with his dad. Later that night, as his mother tries to console him, Abe threatens to move out and demands that she pay her backgammon debt. When she suggests that he see a psychiatrist, Abe launches into a tirade about people needing to face the truth. “We’re all horrible people,” he tells his mom, “humanity is a fucking cesspool.”

When he shows up at work the next day, his father counsels Abe to go back and finish college. He wants Abe to be more like his older brother, Richard (Justin Bartha), who is now a successful doctor. Abe, however, harbors deep-rooted resentment toward Richard as a result of the fact that his parents obviously play favorites. Richard calls his younger brother, but Abe only spews venom before hanging up.

Abe, however, gets a surprise phone call from Miranda, who feels terrible about what happened and invites him over. When Abe arrives, she’s sprawled on the bed. Once awake, Miranda confronts Abe: “Please tell me something, and I need you to be honest. Are you for real? And you’re not being ironic . . . like performance art or something?” If you don’t think those are hilarious lines, this film might not be for you.

While giving Miranda a tour of his room, Abe suggests that his family’s house would be a great place for them to live once his parents move to Florida. Miranda is taken aback that he doesn’t want them to get their own place, but she makes a tearful confession and manipulates Abe by asking, “Is this going to affect things, make you change your mind?” Marie certainly thinks so. “I guess that takes care of that,” she counsels him, but Abe is not one to heed anyone’s advice.

From this point on, the trajectory of Dark Horse becomes even more complicated. Although many of today’s independent filmmakers appear to be moving away from scripts and heavy plotting, Solondz’s strength as a filmmaker has always involved his considerable writing skills and trenchant wit. Dark Horse mixes fantasy and reality throughout, but as the film progresses, the divide between the two becomes even more complex and intricate, and various revelations are made about several of the characters (though many of them occur in Abe’s tortured mind). The film’s final shot cleverly makes us rethink what’s gone before.

If Dark Horse seems like a romantic comedy, Solondz deliberately undercuts audience expectations about genre. As he puts it: “I think the only tradition I’m interested in pursuing is a tradition of upending traditions, and finding new meaning in the way in which these conventions and old stories are tackled. It’s good to not always give people what they expect, but I don’t think anyone would mistake this for a Wes Anderson movie.” I think it’s safe to say that no viewer will make this error.

Solondz uses pop songs, clashing color schemes, clever flights of fancy, and a series of repetitions to convey abrupt tonal changes in Abe’s mood and character. Abe’s yellow Hummer pulling into his parents’ driveway becomes a barometer of his fluctuation between depression and naive optimism. Irony is a recurrent theme. Dark Horse aspires to end with a wedding, but, as most of us know, it’s always a risky proposition to bet on a long shot.