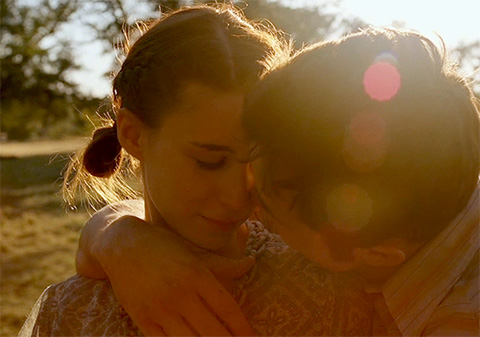 Set in Texas (though apparently not actually shot there), David Lowery’s second feature, Ain’t Them Bodies Saints (2013), is a modern-day western, chock full of references to both genre and other films. Its emphasis on visual storytelling recalls Terrence Malick and David Gordon Green. Prior to this, Lowery worked on many indie features, most notably as an editor on Dustin Defa’s Bad Fever (2012), Amy Seimetz’s Sun Don’t Shine (2013), and Shane Carruth’s Upstream Color (2013). Lowery intended to shoot Ain’t Them Bodies Saints as a low-budget feature, but stints at the Sundance screenwriting and producing labs led to a $6 million budget and big-name stars.

Lowery had made an earlier feature, St. Nick (2009), which did not receive wide release, as well as a dramatic short, Pioneer (2011), featuring Will Oldham. He credits Pioneer with helping to attract Casey Affleck and Rooney Mara to his new project. He told Eric Kohn of Indiewire: “I made St. Nick on a 30-page outline. Ain’t Them Bodies Saints was a full-bodied script, but it still had a lot of room for improvisation. There were scenes that weren’t there on the page – just a sentence saying something happens. I was like, ‘We’ll figure this out when we shoot it.’ I was very surprised to a certain extent that they responded to it as much as they did. But what helped was that we sent the script out with Pioneer. When folks could read the script and watch that movie, I think it really helped contextualize the film we wanted to make.”

Ain’t Them Bodies Saints begins with a spat between a young couple, Bob Muldoon (Casey Affleck) and Ruth Guthrie (Rooney Mara), which ends on a blissful note once she confides to him that she’s pregnant. Their happiness, however, is short-lived when they attempt to pull off a robbery. In a shootout with law officers, one of the gang members, Freddy (Kentucker Audley), gets killed and Ruth shoots and wounds the local sheriff in the shoulder. As the officers move in and the couple’s situation becomes dire, Ruth tells Bob that there’s no way she can go to prison with their baby due. His hands covered with Freddy’s blood, Bob surrenders, and the two are escorted out by the police in handcuffs. Bob takes the rap and gets sent away, leaving Ruth to fend on her own.

The film’s setup occurs so quickly that it’s hard to get one’s bearings. Lowery’s cutting is not only fast-paced, but the film is also shot in a highly elliptical style. The film’s emphasis is on individual shots rather than on sequence. There’s a minimum of dialogue. Events unfold through a series of stunning images, rich in texture and atmosphere, underscored by natural sounds and a heavy dose of mood music. Bradford Young, who won the best cinematography award at the Sundance Film Festival last January, often opts to shoot in low light. Scenes take place at magic hour or in a world of dark shadows. Lowery is less interested in having a tight plot – there are huge narrative gaps – than in creating a kind of filmic poetry.

It turns out that Bob is madly in love with Ruth and always has been. These are doomed lovers – like Kit and Holly in Badlands (1973). Rather than a road movie of a couple on the run, this is a story about the enduring pain of separation. In prison, Bob writes long letters to Ruth every day. In voiceover, he professes his undying love for her and vows to come back for her eventually. Meanwhile, Ruth has a little girl, whom she names Sylvie. Almost from the moment the baby is placed into her arms, Ruth’s bond with Sylvie represents a case of transference. As she grows older, Sylvie (played by Kennadie and Jacklynn Smith) is so adorably cute, that it’s not hard to see why. Ruth suffers from intense guilt. Her life is based on a lie, but what other choice does she have? We sense the roots of this tragedy almost from the first few minutes of Lowery’s deeply heartfelt film.

In Bob’s fixation to be reunited with his family, he attempts to break out of prison multiple times before he finally succeeds. Meanwhile, the enigmatic Skerritt (Keith Carradine), a kind of surrogate father to Bob and the deceased Freddy, laments the loss of his own family. He seems intent on keeping his eye on Ruth and Sylvie by moving them next door. His own bitterness becomes a determining factor in his contempt for Bob, setting up an inevitable showdown.

Given his position as representative of the law and the expectations of genre, the sheriff, Patrick Wheeler (Ben Foster), would seem the more likely antagonist. He runs into Ruth at church, turns up at her house, and takes a kind-hearted interest in her and Sylvie. Ruth tries her best to keep her distance from him, but given her own dead-end situation, he represents the kind of stability that Bob can never give her. Several nasty individuals also manage to surface (are they bounty hunters?), so that when Bob finally returns, he faces three different sets of foes that stand between him and his family.

Casey Affleck, looking like a younger David Byrne, is riveting as the love-struck criminal. He might stand outside the boundaries of the law, but he wears his love of Ruth as his own shiny badge of honor. She’s the only thing he has going for him and he knows it. Rooney Mara, as Ruth, is a woman of few words, despite the intensity of emotions that smolder inside her. Ruth is caught in a trap of her own making, and looking for any means of escape. She is well aware that her options are limited. Ben Foster, as Wheeler, harbors no particular resentment toward either Bob or Ruth – he views his injury merely as a hazard of his job. Yet, like Ruth, he has his own inner conflicts, especially regarding his duty to hunt down Bob.

Like Jeff Nichols’s Mud (2013), which grossed over $20 million at the box office this year,  Ain’t Them Bodies Saints  – the meaning of the title eludes me – aspires to be a mythic American film. But Lowery’s film is far less conventional than Mud. Mud is a narrative film with rich poetic flourishes, whereas Ain’t Them Bodies Saints is much closer to a poem with narrative touches. I initially watched the film on pay-per-view, which left me underwhelmed. The dark palette simply did not play well on the smaller screen. After having a chance to see it at our local Sundance Cinema, I simply can tell you that this film really needs a big screen and good sound to work its considerable magic.

Ain’t Them Bodies Saints might remind you of other great genre films you’ve seen, but that’s actually its strength rather than a weakness. Lowery’s emotionally affecting film is one of the most impressive cinematic achievements in a year filled with an unusual number of exceptional releases.