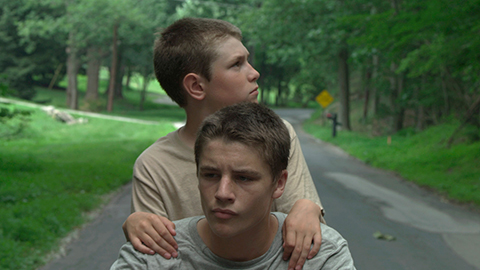 The specter of death casts a mysterious spell over Daniel Patrick Carbone’s mesmerizing debut feature, Hide Your Smiling Faces (2014). Set in rural northwestern New Jersey, the film deals with young kids trying to come to terms with the kinds of heavy issues for which they lack either the experience or vocabulary. In its emphasis on visual storytelling and focus on the natural world, critics have compared the film to the work of Terrence Malick. Yet Malick’s vision has a more epic and cosmic sweep, whereas Carbone’s episodic film is rooted in the mundane details of events that occur over the course of a single summer. In this respect, Carbone’s film shares a greater affinity with Clay Jeter’s Jess + Moss (2012), or Tim Sutton’s rapturous Pavilion (2013).

Hide Your Smiling Faces begins with a metaphor: an extended shot of a snake leisurely feasting on a fish. The film cuts to a shot of the film’s two protagonists – fourteen-year-old Eric (Nathan Varnson) and his nine-year-old brother, Tommy (Ryan Jones), framed by the inside of an abandoned building that overlooks a picturesque lake while it rains. Carbone creates an insular world of young kids – an all-male world, in which girls are decidedly absent. A female classmate is later heard as a disembodied voice. Two of the kids’ moms also appear, but they play only limited roles in the story. The boys go boating, swim in the lake, bike down empty roads, and explore nature. For these young boys, wrestling and other physical activities serve as forms of sublimation. A large group of them routinely stage wrestling matches, in which Eric is pitted against a longer-haired friend of the same age named Tristan (Thomas Cruz).

Early on, Tommy and his two friends find a dead crow to which they decide to improvise a song. One of them, Ian (Ivan Tomic), proves adept at creating sound effects. Godard said that “All you need for a movie is a gun and a girl.” There aren’t any girls in Carbone’s world, but there is at least a gun. It is introduced by Ian, who brings out his father’s pistol and shows it to Tommy and another pal, Blake (Andrew M. Chamberlain). Ian’s father (Colm O’Leary) catches them with it and banishes Ian: “Get lost. Go cry in the woods,” he snarls, before harshly ordering the other two boys to “get the fuck out of here.” Sometime later, after Eric and Tristan steal hamburgers and then throw the trash from a massive stone train bridge, they spot Ian’s body sprawled down below.

Did Ian jump or did he accidentally fall to his death? The film is ambiguous on this note. And the reactions of the kids are equally confused about what has happened. A man at the wake (Clark Middleton) tries to give it a religious spin by insisting that “the Lord has a plan for Ian,” which leads to an awkward exchange with Eric. Eric and Tommy’s parents also try to get them to talk about their feelings, but the two brothers instead wind up grinning inappropriately (hence, the title of the film).

The boys are, in fact, deeply disturbed by Ian’s death, even if they don’t know how to express it properly. It comes out in other forms, some of which are self-destructive. While boating, Tristan raises the issue of death to Eric in dialogue that is spare and laconic:

TRISTAN: Do you ever think about dying?
ERIC: What?
TRISTAN: Like Dying. Someone killing you, or you killing yourself.
ERIC: No, not really.
TRISTAN (after a long pause): I do.
ERIC: Why?
TRISTAN: I don’t know. I just do.
ERIC: Are you sad?
TRISTAN: Yeah, I guess, a little.
ERIC: You want to die because you’re sad?

Eric’s response is to use Tristan’s prone body as a springboard for a dive into the lake. Right after this, Eric and Tommy’s family dog, Daisy, makes a startling discovery – the carcasses of dead pets – hidden in the forest. This serves as one plot thread, especially when Daisy later disappears.

While cavorting in the woods, Tristan points a rifle at Eric’s head. He wonders, “Do you think you’ll die if I shoot you?” When Eric claims not to know, he responds, “What if I held it to your head?” Tristan later calls Eric on the phone with an even more overt threat, the subtext of which is all too apparent, except to them.

Eric tries hard to express affection for Tristan, but the boys’ feelings for each other are too deeply repressed by the male adolescent culture they inhabit. Expressions of emotion can only be discussed cryptically and indirectly, as the above scene so clearly indicates. On a similar note, the younger kids, Tommy and Blake, experiment with kissing each other through a sheet of clear plastic. Later on, Eric and Tristan wrestle each other. Eric punches Tristan, who then deliberately hurts Eric’s already wounded hand. Eric chases him down and holds a gun to his friend’s head. With some irony, Tristan calls Eric a “psycho,” before running off.

Given the repressed feelings of these kids, their true reactions are often displaced. Eric, for instance, bullies Tommy physically, by tossing him into deep water to teach him how to swim or “jokingly” pretending to throw his younger brother off the bridge. The terror these situations cause Tommy gives Eric a charge, just as Tristan taunts Eric about suicide in order to elicit even the slightest hint of affection from him. At the dinner table one night, when Eric appears to have hurt his hand and his father questions him, Eric suddenly blurts out, “I hate it here. I do. You don’t care.” His parents’ expressions of concern lead to the exact opposite response. Hide Your Smiling Faces is richly observant in capturing these contradictions. It brilliantly manages to capture the utterly irrational dynamic of what it feels like to be a kid.

Hide Your Smiling Faces belongs to what appears to be a new genre of post-mumblecore films. These films – Pavilion, Jess + Moss, Putty Hill (2011), It Felt Like Love (2013),  and Stand Clear of the Closing Doors (2014), among others – use naturalism, but in a different way. They are primarily visual rather than verbal. They are not about post-collegiate angst and the interpersonal relationships of characters in their twenties, but explore the texture and experience of childhood and adolescence. The films deal with either death or some other traumatic event for which the characters struggle to make sense of something that’s beyond their comprehension. These new films don’t harken back to Cassavetes, Rogosin, and Mailer, but rather to Terrence Malick and early David Gordon Green, or perhaps to Morris Engel’s The Little Fugitive (1953).

Hide Your Smiling Faces was a surprise hit at last year’s Tribeca Film Festival. It opened at Cinema Village in New York City in late March and is currently screening theatrically in select cities. It’s also available on VOD from Amazon and iTunes. I first saw the film last year and welcomed a chance to revisit it now that it is more widely available. Beautifully shot by Nick Bentgen, Carbone’s film transports viewers back to that world of both confusion and wonder, that early period in our lives that somehow still manages to haunt our memories.