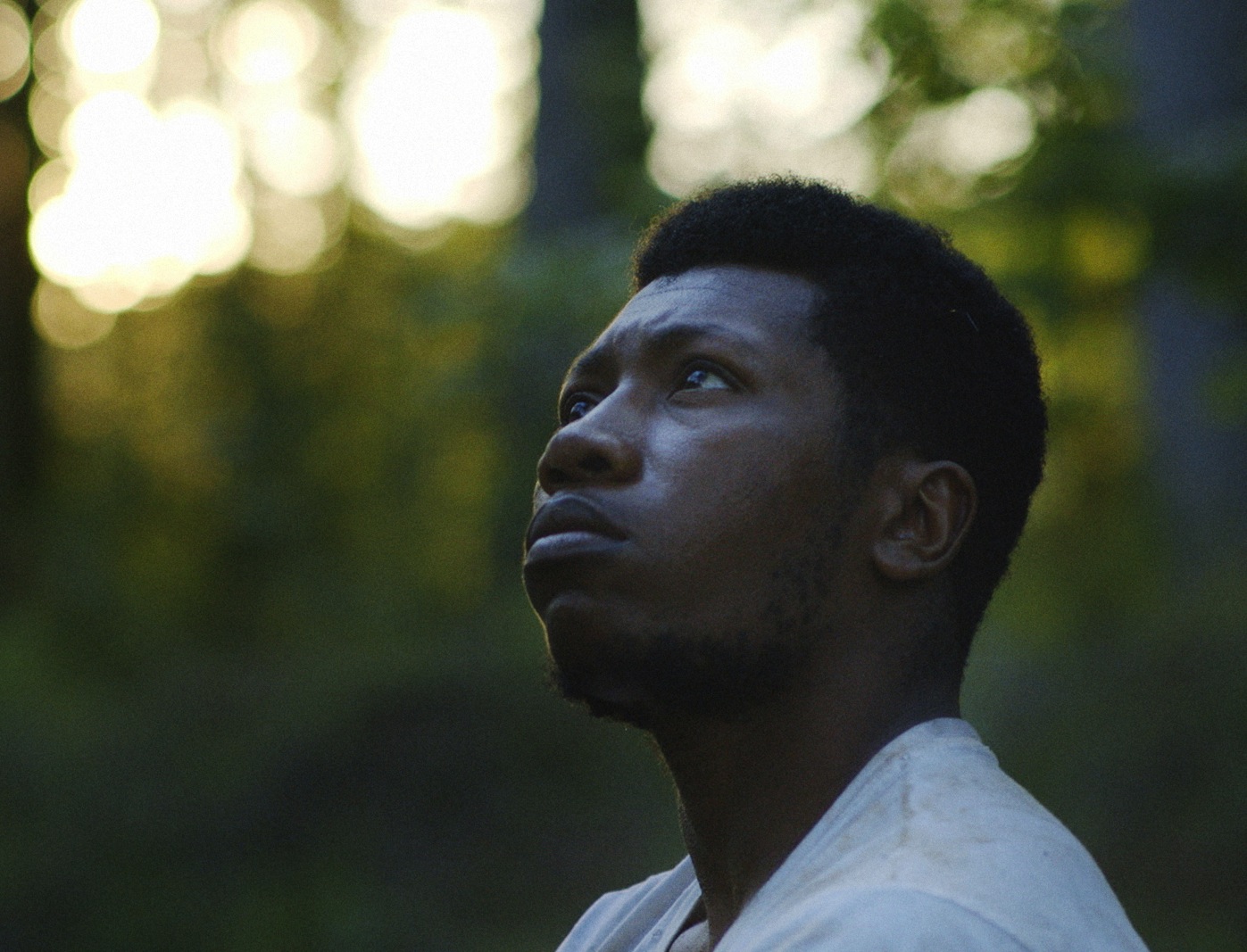 Tim Sutton’s sophomore feature, Memphis (2014), is neither a character study nor a city portrait. Although there’s a sliver of narrative, Memphis is more akin to a haunting visual poem – a kind of ghost story, in which the ghosts never quite become fully manifest. Yet we feel their traces in virtually every shot of this magnificent and stunning film. They are there in the rustling trees and boarded-up wooden shacks, in the distant sound of the trains, in the kinetic energy found in the black church, in the piercing reaction shots of the characters, especially the young kids, and in the tracking shots that don’t so much follow the participants as anticipate their eventual presence within a shot.

At the center of Memphis is an African American musician named Willis (Willis Earl Beal). Following a shot of a kid on a bicycle making faces and muttering as if engaged in an internal dialogue, Willis appears at a TV studio. He needs to clarify whether he’s appearing on radio or television. Once Willis is assured of the medium, he is asked by the white announcer whether he ever dreamed he would achieve such notoriety: producing an album and being in a film. Willis’s answer is completely unexpected. He claims to be a wizard and talks about imagining his success into existence through sorcery. Willis explains: “You create a reality that you envision, you use magic and then the magic comes true, but the magic doesn’t fulfill everything you thought it would fulfill.” The cameraperson looks on impassively, as Willis proclaims: “Life is artifice, man. Everything is all artifice.”

Willis’s remarks, which seem to come from left field, leave the viewer unsure how to interpret his comments. Is Willis some kind of genius or a crazy person? As the film follows him, that question becomes central. Sutton eschews the kind of exposition provided by most conventional narratives. If legibility is central to Hollywood storytelling, Sutton continually undercuts it throughout Memphis. Other characters besides Willis, such as the woman with whom he’s romantically involved or his male buddy, are never identified by name. Nor are we clear about a number of relationships. There’s not so much a story, as a series of incidents or situations involving mostly Willis, who seems to be suffering from a creative block as he wanders around Memphis while his life seems to be falling apart.

After someone gives testimony during a church service, Willis appears at the microphone, but decides not to sing, creating a very awkward moment as the minister looks on. During a visit with his girlfriend, they get into a spat when she calls him crazy. A scene where Willis walks down the street and flaps his arms like a bird and a subsequent meeting with his record producer reinforces that possibility:

After the producer reacts with genuine frustration, Willis apologizes.

It soon becomes clear, however, that Willis does have real talent. In the recording session that we watch, as they play “Flying So Low,” the guitar player suddenly stops the session to complain that Willis is not following the score. Very annoyed, he yells, “Why was that changed?” Willis admits that he’s probably at fault, but insists, “No, we have to be intuitive about this. I’m an intuitive singer.” He tells him: “It’s got to be amorphous. It can’t just be on the paper.” Finally someone off-screen instructs the musicians, “You just gotta follow him wherever he goes.” The guitar player glowers in response. The scene is reminiscent of what we see in Shirley Clarke’s film on Ornette Coleman, Made in America (1985), where Coleman continually frustrates the musicians with whom he is playing by defying musical conventions.

Other films, such as Jim Jarmusch’s Mystery Train (1989) or Kentucker Audley’s Open Five (2010), have used the more well-known aspects of Memphis as a setting, but Sutton has something very different in mind. What he gives us is a view of Memphis as a landscape haunted by its legendary past. Except for a scene on Beale Street, we don’t get a view of the city’s landmarks, but rather its impoverished underside – as it might appear to those who live there. In one scene, the camera holds for several seconds on the face of Willis’s male friend. Afterwards, as the friend plays a board game on a wobbly table, he talks about an experience in which he suddenly realized he had been knifed. Right afterwards, there is a shot of the back of a white Cadillac. The friend gets out of the passenger side and it is revealed that the man is missing a leg as he walks away from the camera on crutches.

In an interview, Sutton explains: “Memphis is a place that is both cursed and blessed. It has the history of many kings but, at the same time, has grass growing up through the cracks in the sidewalk. That’s what I wanted to ruminate on and further illustrate. To explore a place that feels like a forgotten Eden, not some tourist’s idea of blues but REAL blues, a world that is mythic and being taken back by the trees and the river and the witnesses who live there.” In depicting this forgotten Eden, about a third of the way through the film, the thin narrative begins to fracture. It’s replaced with impressionistic images: guys talking in a seemingly deserted strip mall, shots of moving clouds and the moon at night, kids riding their mountain bikes, a row of brick houses set amidst very tall trees, and a stunning red filtered image of a young girl sitting by herself in a booth at a rolling skating rink (reminiscent of a Yang Fudong photograph), Willis sitting in the front seat of a car as the windshield wiper clears the rain, or a shot of the white Cadillac from behind as it drives through the streets at night while colorful car lights create strange, diaphanous patterns.

Sutton mixes together different types of narration, continually blending narrative, documentary, and avant-garde modes of filmmaking. Willis, for instance, talks directly into the camera at times, suggesting a verité style of filmmaking. In one noteworthy scene, he espouses his views on glory: “You find glory alone, by yourself, with nobody around. Nobody can hear you. That’s where the glory is found.” Yet Willis continues his tailspin, withdrawing more and more into himself, except for his one-legged friend, while the film continues to digress from the main plotline involving Willis. In one scene, the camera stays on the one-legged man as he slowly buttons his white shirt. After he walks away from his car on crutches and leaves the frame, we see a hand smash the back window with a mallet or hammer. The man returns to his car and peers at the broken window. As he drives through the streets, he looks in the rearview mirror. We watch as shards of glass fall from the broken window. The man later sits alone in the back seat of the parked car and stares at the flame of his lighter for over half a second.

Questions of who smashed the window or why don’t matter to Sutton. In the world he’s portraying, people get stabbed and cars get vandalized. His concerns are actually much more formal, as the description of the scene indicates. Toward the film’s end, the director and his cinematographer, Chris Dapkins, resort to several long tracking shots that again are less concerned with story than with creating visually compelling imagery. Because the film was funded by a $200,000 grant from the Venice Biennale College program, Sutton needed to have a “scriptment” for it, but once he chose the eccentric artist and musician, Willis Earl Beal, for the lead role, the story was subsequently improvised and shaped around the personality of the performer. Sutton explains his open approach on set: “But within the scenes, the people in the film had control over how they acted. I work with real people as real people; I guide them and give them hints, but within the frame it becomes very much about them.”

In terms of Beal, the character in the film bears a resemblance to the musician in certain ways, which helps to collapse the divide between performer and role. Although the film is carefully constructed, especially through Seth Bomse’s editing and various sound and image juxtapositions, Beal inhabits his character in such a natural way that the film feels more observational than scripted. There is a sense that we are watching real people rather than fictional characters. Sutton’s follow-up to his superb Pavilion (2013) is even more layered, formal, and complex. Memphis is a poetic, visual rendition on the blues, a dazzling meditation on a deeply troubled musician in free fall and a mythic American city that has likewise seen better days.

Memphis played at Venice, Sundance, Sarasota, and the Wisconsin Film Festival (where I saw it), and most recently at the BAMcinemaFEST in Brooklyn. The film will be distributed theatrically by Kino Lorber and will be available on VOD for a month through Vimeo.