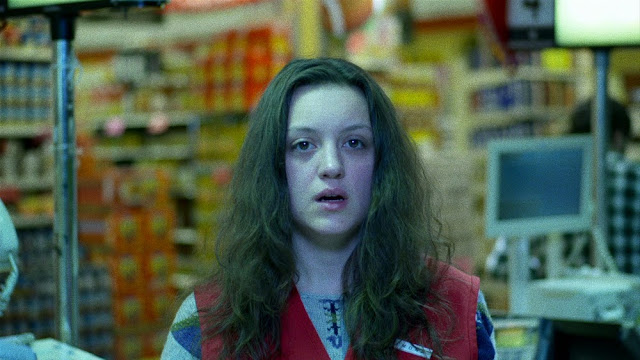 In Richard Linklater’s recent runaway indie hit, Boyhood (2014), it is the parents who make a mess of their lives while the two children suffer quietly but somehow grow wiser from the experience. In his debut feature, See You Next Tuesday (2013), Drew Tobia presents a much different spin on the dynamics of a dysfunctional family, showing us the fallout on the lives of two daughters raised by a recovering addict, and it’s not a pretty picture. Tobia comes out of a different tradition than most recent indie filmmakers. He’s not influenced by John Cassavetes, Jim Jarmusch, Linklater, or David Gordon Green, but by the Warhol-inspired underground tradition of Paul Morrissey, John Waters, punk, and the post-punk films of Richard Kern and Nick Zedd. That explains the mixture of dark humor and shock, but Tobia manages to crank up the drama to the point where virtually every scene approaches the level of hysteria.

See You Next Tuesday – the coded slang title is key to the sensibility at work here – begins with an extended close-up of its young protagonist, Mona (Eleanore Pienta), as she stares motionless and with her mouth slightly open, like a subject in a Warhol Screen Test, while the full credits scroll underneath. Her daydream at the checkout counter of the Brooklyn supermarket where she works is interrupted by the fast-talking banter of two African American co-workers, who openly ridicule and harass her. Her creepy customer is no less hostile once she informs him that it is illegal to buy pet food with an EBT card.

A visit with her mom, May (Dana Eskelson), proves no less depressing. It takes only a few verbal exchanges before their conversation escalates into a full-blown argument. May is a master of mixed messages. She claims to love Mona and be praying for her, but, as May makes the sign for giving a blessing, she tells her, “Bite me.” That’s not such a surprising response given that her favorite retort seems to be, “Suck my dick.” When Mona inadvertently cuts her finger, the scene quickly turns into a frightening psychodrama, as the two women both scream and yell at a very high pitched level. When Mona leaves, her mother tells her, “I love you so much, I could shit.”

Mona’s punkish sister, Jordan (Molly Plunk), hates May with a passion and deliberately keeps her distance. Jordan considers herself an artist (though we see no evidence of this) and sponges off her African American girlfriend, an older writer named Sylve (Keisha Zollar), who also moonlights as a bartender. When Mona turns up unexpectedly at their high-rise apartment, it induces panic in Jordan. She gets Mona out of the house quickly by taking her to a nearby coffee shop. Mona mentions that May misses her, but Jordan responds, “That woman is a monster.” Jordan also reiterates that Mona can’t just show up without notice, but Mona doesn’t have a phone, which only further exasperates her sister. It doesn’t take long for the two to get into a shouting match. Mona goes for the jugular by angrily telling Jordan, “Fine, be mom.” She abruptly splits, causing Jordan to chase after her.

Both sisters are complete social misfits. Mona is eight months pregnant, working at a minimum-wage job, and appears to have no friends. We soon understand why. Her red coat is so ratty, she looks like a homeless person, and, indeed, her co-workers take great pleasure in poking fun at everything about her. When she attends an AA meeting with May, which is run by a woman in a black pantsuit and dark sun glasses, the testimonials from other group members are full of revelations of such self-loathing and disturbing behavior that for a moment we feel as if we’ve stepped into a Todd Solondz film. Mona reacts to the confessions with disdain and raised eyebrows, but sadly, she clearly belongs in the same league with these folks.

After the meeting, when one of the attendees named Bev speaks knowingly to Mona about her situation, Mona flips out. As she runs off in tears, Bev calls her “a walking advertisement for birth control.” Mona proceeds to get into a fight with May for talking about her to other people in the group. As they argue, it turns vicious, as each one attempts to wound the other deeply. Mona calls May a “low-life drug addict,” while May screams that Mona is a “fucking bitch” and a “fucking retard.” As Mona takes off by herself, she cries out, “I’m not the fuck-up.”

Mona might not think so, but the fact that she’s about to have a baby is a very scary thought, especially after she proceeds to lose her job and get evicted from her apartment. Jordan likes to view herself as more together than her sister, but she’s equally a freak. With her red-dyed hair and the mismatched patterns of her clothes, she looks a bit like a court jester. Although she’s in a relationship, it’s full of tension as well. Jordan, it turns out, is also self-destructive. While drunk one night, she calls her lover the “N-word” and later provokes Sylve to violence. “You deserve to be alone,” Sylve tells her. The scene ends with Jordan throwing a tantrum and screaming that she wants to die, regressing to the pathetic state of an emotionally disturbed child.

Things continue to deteriorate for all these characters. After Mona eventually loses her job and apartment, she again intrudes on Jordan and Sylve’s lives, especially because May is still angry at her and won’t let her crash at her place. Mona ends up wreaking havoc. Despite her pregnancy, she gets drunk at a party for some gay friends of Sylve and Jordan who are leaving for Portland. This ends in a physical fight between the host and Jordan, who dutifully comes to Mona’s defense after she gets physically thrown out of the party. The subsequent confrontation between the two sisters leaves Mona in a sad and pitiful state.

What sets Tobia apart from other transgressive filmmakers is his incredibly keen dramatic sense. He knows how to create conflict and has the unique ability to ratchet up the inherent tension within scenes in a matter of seconds. Because his characters are all dysfunctional, what they say and do is rather shocking. Tobia wants to provoke his audience through various means. He doesn’t care one iota about political correctness. Jordan might have a black girlfriend, but she somehow thinks that gives her the liberty to be racist, and their re-enactment of passages from Gone with the Wind as a sexual turn-on will no doubt make many audience members cringe. Tobia’s characters spout all kinds of things that are deliberately offensive. Mona’s gross actions recall the films of John Waters, especially because they exhibit an obsessive preoccupation with bodily excretions.

The idea for the film developed from a character that Pienta had originally created. Based on her character, Tobia wrote a full-length script of roughly 105 to 110 pages. The final version of the film is only 82 minutes, but the filmmaker suggested in a Skype interview after the screening I saw that much of the film is actually scripted rather than improvised. The performers, especially Pienta and Plunk, are so convincing and natural in their respective roles that a viewer would be hard pressed to tell. Despite the disturbing behavior of Mona and Jordan, we can’t help but empathize with the sheer pain of these neglected and desperate young women. That the two of them are not locked up in some madhouse is a tribute to their indomitable spirits.

I saw Tobia’s See You Next Tuesday at Brandon Colvin’s Micro-Wave Cinema screening the other night. The film was originally passed on by SXSW and Tribeca, but is one of those rare gems that other festivals and folks managed to find nonetheless. The film recently had a two-week run at the Cinema Village in New York City, and is currently available on VOD. The DVD has just been just released. Tobia is a young new talent. His film might not be for everyone, but that’s what makes it so special.