Stand Clear of the Closing Doors

Stand Clear of the Closing Doors 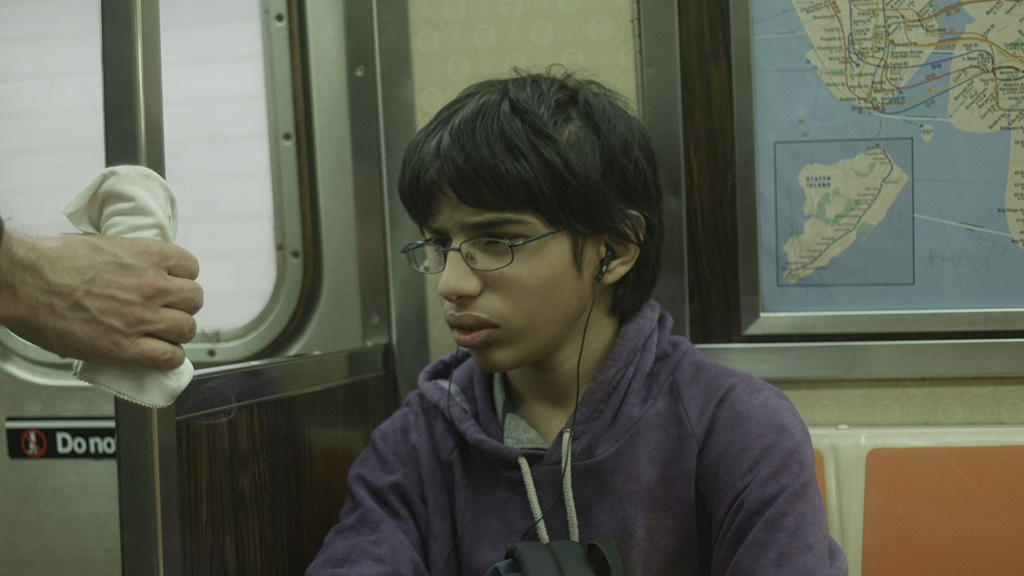 Sam Fleischner’s Stand Clear of the Closing Doors (2014) tells the story of a thirteen-year-old autistic boy who gets lost in the New York subways in the period leading up to Hurricane Sandy. Although the film employs a dramatic framework – a family’s search for a lost child with a disability – the film is notable for Fleischner’s impressive use of visual storytelling. Stand Clear of the Closing Doors recalls an early classic of American indie cinema, Morris Engel’s Little Fugitive (1953), made in collaboration with fellow photographer Ruth Orkin and screenwriter Ray Ashley (Raymond Abrashkin). Like Engel’s film, which explores the legendary amusement park Coney Island, Stand Clear of the Closing Doors is built around two locations: Rockaway Beach in Queens and the New York subway system. Based on an incident he had read about, Fleischner turns his film into a political statement couched in a poem. It deals with the enormous stress placed on an undocumented Mexican immigrant family struggling to cope with a disabled child within an institutional system that views them as unwanted burdens.

Stand Clear of the Closing Doors begins with the sound of bagpipes and a shot of its protagonist, Ricky Garcia (Jesus Sanchez-Velez). Filmed from behind, he feeds diving seagulls as a plane glides diagonally through the frame after taking off from nearby JFK Airport. Ricky has skipped school to hang out at the beach, which, along with a local sneaker store, is one of his favorite haunts. He returns to the school steps, where his older sister, Carla (Azul Zorrilla), walks him home. Ricky, who is somewhere on the autistic spectrum and played by an actor who has Asperger syndrome, excels at computers and drawing but struggles with basic tasks. He pees on the top of the toilet seat, often forgets to eat, and resists taking his meds. After his mother chastises him for his truancy and his sister fails to pick him up at school, Ricky walks home alone. Fourteen minutes into the film, he follows a guy wearing sneakers with an Ouroboros sewn on the back of his jacket into the subway, where Ricky proceeds to ride the trains for days.

Fleischner utilizes a parallel structure – Ricky’s personal odyssey in the subway and his mother’s search for him. Mariana (Andrea Suarez Paz) is a beleaguered mom. She cleans house for a rich young white guy (Kevin Bewersdorf), while her husband works somewhere upstate and her rebellious teenage daughter would rather be elsewhere. Ricky’s disappearance causes the family unit to fracture even more. Mariana, who lives isolated from her neighbors, turns up at the sneaker store and gets help from the saleswoman, Carmen (Marsha Stephanie Blake), who encourages her to take action. Together they put up “missing person” posters, while the police turn out to be no help at all. (It’s a great touch that one of the detectives who visits them is on oxygen). Even though she cares deeply for her children, Mariana’s anger at her situation feels toxic. She blames Carla for Ricky’s disappearance and her estranged husband, Ricardo (Tenoch Huerta), for not being able to collect wages due him. Mariana and Carla clash constantly before Ricardo eventually returns home to join in the search.

Meanwhile, Ricky rides various subway trains, getting weaker and weaker from lack of food and water. For the most part, the other riders appear indifferent to him. A homeless black man gives him a banana, but one teenager becomes disgusted and abusive when he realizes that Ricky has wet his pants (because the public bathrooms inside the subway are, of course, all locked). Although viewers might expect that the search for a missing autistic child would entail incredible dramatic suspense, especially once we learn that Hurricane Sandy is imminent, that proves not to be the case. Little Fugitive does something similar. In Engel’s film, the narrative becomes a means to explore the visually exciting world of the amusement park – the rides, arcade games, junk food, and crowded beach – all seen through the eyes of an impressionable young child with an obsession with horses.

Fleischner also chooses not to exploit the inherent drama. Instead, one of the main strengths of Stand Clear of the Closing Doors is that it allows us to view the underground world of the New York subways through Ricky’s eyes. We see it not only as a microcosm of diversity – the interaction of people of all ages, races, and ethnic groups – but as a wondrous kaleidoscope of abstract patterns of color, light, and sound. Fleischner mixes staged scenes and documentary footage so skillfully that it’s hard to tell the difference between the two. We overhear snippets of conversation – a gray-haired man tells a young child in a stroller an anecdote about “Louie the Tailor,” a crazy woman makes an Anti-Semitic remark about the mayor and expresses plans to vote for Mitt Romney, two arrogant guys grossly underestimate the power of the approaching storm – and watch teenage break dancers perform intricate dance movements for the benefit of the riders. On Halloween, people in scary costumes populate the subway, transforming it into a surreal carnival, before the trains finally shut down due to the hurricane. Yet, through all of this, Ricky’s detachment at being lost becomes our own detachment, so that the family drama involving his disappearance feels as if it’s occurring in an alternate universe.

Shot by Adam Jandrup and Ethan Palmer, Stand Clear of the Closing Doors manages to capture the kinetic energy of the subway, and, in the process, the character of New York City itself. The film’s power derives largely from its subjective point of view and carefully observed details. Fleischner joins a group of indie filmmakers – Matt Porterfield, Tim Sutton, Daniel Patrick Carbone, Eliza Hittman, and Jeremy Saulnier, among others – who appear to be moving away from mumblecore’s reliance on dialogue in favor of a new emphasis on visual storytelling and style. Stand Clear of the Closing Doors played at the Wisconsin Film Festival last April, as well as at BAMcinemaFEST, before having a brief theatrical run. Distributed by Oscilloscope, the film is currently available on VOD and just appeared on Amy Taubin’s year-end Top Ten list in Artforum.