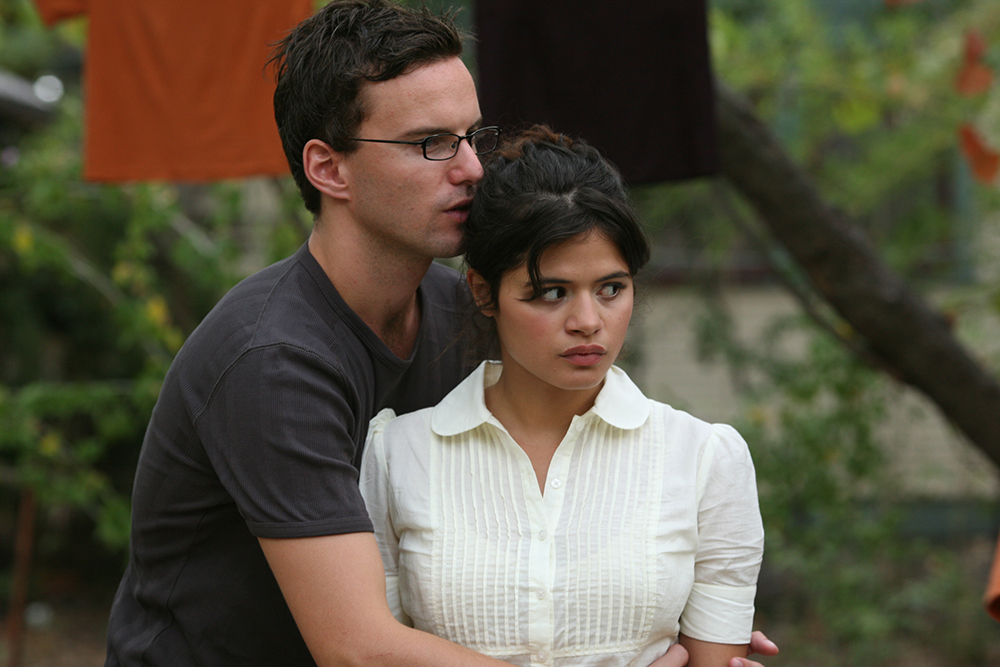 Although many indie filmmakers—Gus Van Sant, Matthew Porterfield and Joe Swanberg, among others—have used more minimal forms of scripts, such as outlines and treatments, Spencer Parsons and Line Langebek [Knudsen] have argued in favor of a more detailed and “overwritten” script, which they term the “spacious screenplay.” As they explain, “The screenplay is chiefly written for experiential performance and assumes non-traditional shooting strategies for narrative fiction, primarily focused on the recording of performance—and in particular the unpredictable and possibly ‘improvised.’” Their ideas are largely based on the film practice of John Cassavetes as well as their own experience. In contrast to the underwritten script, they posit “a longer, more filled-out, and possibly even novelistic style of screenplay.”

The spacious screenplay is written less for the benefit of the director or producer than for the actors, who, as was the case with Cassavetes, assume a more privileged role in both the writing and production. Parsons and Langebek offer ten principles related to the concept of the spacious screenplay that extend through the various stages of production: pre-production, production, and editing. The spacious screenplay is written with particular performers in mind. As the authors make clear, “Performers must be able to make the most of the opportunities offered by the script in order to hold their own in improvisation or even simply reacting to improvisation.”

Prior to making his debut feature, I’ll Come Running (2008), Spencer Parsons had never met his co-screenwriter, Line Langebek, in person. In an SRN conference presentation, the two equated their collaboration to a blind date, or more accurately, to a form of online dating. They worked on developing the script together via electronic communication without the benefit of actual face-to-face interaction. One of the three producers on the film, Lars Knudsen, who, like Linebek, is Danish, suggested shooting the film as a co-production. As Parsons explains, “At that point in my experience, I would not have speculatively written a screenplay to take place in another country, which would have seemed a fool’s errand for a small, independent film. Our open process, however, allowed us to shoot in Denmark when Knudsen suggested his home country as a location. The characters’ unplanned adventure would be mine.” The film’s financing no doubt contributed to the development and shape of the resulting narrative.

I’ll Come Running begins with a group of three Danish tourists visiting the Alamo in San Antonio, Texas. The young men in their twenties are loud and obnoxious—the equivalent of three macho jocks on an extended vacation. Their male camaraderie entails drinking heavily and ridiculing the locals. In a Mexican restaurant, they poke fun of the fake ethnic furnishings. The trio harass the patrons, as well as the Latina waitress who tries to get them to quiet down and behave. One of them, Pelle (Jon Lange), begins flirting with her.

A notorious ladies’ man according to his friends who allude to his prior sexual escapades, Pelle decides to change his travel plans. Instead of flying back to Denmark with his pals in order to start a job that a close friend named Søren has obtained for him, the former child television star decides to delay returning home in order to pursue the Latina waitress, Veronica (Melonie Diaz). When Pelle shows up back at the restaurant at closing time, Veronica invites Pelle to a party and the two commence a torrid sexual affair, in which they bond over the cartoon show, The Simpsons, calling each other Milhouse and Lisa.

An unexpected event occurs at forty minutes, at which point the film structurally divides into two stories when it abruptly switches protagonists, recalling Alfred Hitchcock’s Psycho (1960), once Marion Crane is eliminated. The same shift in protagonists also occurs in Ethan and Joel Coen’s Fargo (1996), which is based on Psycho, as well as in Derek Cianfrance’s The Place Beyond the Pines (2012), another film that pays homage to it. The manual writer Syd Field claims that it is not possible to switch protagonists in a film, yet that is precisely what occurs in all four films. In I’ll Come Running, the protagonist suddenly and unexpectedly shifts from Pelle to Veronica, who impulsively flies to Denmark. There she encounters Søren (Christian Tafdrup), who has been feeding Pelle’s cat in his apartment while his friend has been away.

Parsons discusses the switch in protagonists that occurs in his film in terms of the horror genre, a destabilized narrative, and Steven Shaviro’s The Cinematic Body (1993). He reveals the impetus for the film—a taxi ride in Greece in which he fell asleep and abruptly awoke from a dream—and refers to the film as a “Psycho of romantic comedy.” Out of a sense of guilt, Veronica goes to Pelle’s hometown of Aarhus in an attempt to learn more about him. In a sense, Veronica becomes a “monster”—an external threat—who intrudes into the lives of his family and best friend. As Parsons comments: “Beneath an ordinary surface, the story behaves as a surreal changeling narrative with the second protagonist uneasily usurping the place of the first—not just in the plot, but in the lives of family and friends. I sketched the plot in variations for different genders/sexualities of these ‘relay protagonists,’ and eventually the casting of Melonie Diaz (Fruitvale [2013]) decided the final arrangement.”

Almost from the point at which they meet, Veronica becomes emotionally involved with Søren once she brings news of Pelle. Søren, however, proves to be a destabilizing element. The film is remarkably complex in terms of character psychology. Not only does Veronica soon become intimate with Pelle’s childhood friend, Søren, but she becomes the connection to Pelle for both him and Pelle’s family, including his younger brother, Jonas. In the story that Pelle initially tells Veronica about Søren, he is depicted as wild and crazy, but Pelle nevertheless adores him, which mimics the relationship between Bart and Milhouse. When they were once caught skinny-dipping in a private pool, Søren, still naked, approached the security guard and proceeded to get an erection as he talked with him, which Pelle finds hilarious.

Søren, however, tells Veronica a different, modified version of the story, switching the naked person to be Pelle, which suggests a homoerotic subtext to their relationship, and represents a disturbing transference between the two friends. Not only does Veronica take the place of Pelle, but Søren becomes Pelle’s romantic substitute for her, thus creating a strange and disturbing psychological situation in which the two, in effect, mirror their lover/friend. Pelle’s mother, Mette (Birgitte Raaberg) warns Veronica about Søren by telling her, “You have to be careful with him, Veronica. Always in this door, out that door with him. We’ve known him since he was a kid. He’s wonderful. He has a good heart, but sometimes his heart gets crazy too.”

Parsons has described his working methods on I’ll Come Running: “We workshopped story and characters through rehearsal that included structured and unstructured improvisation, though the story had always been worked out through a highly detailed treatment. Major casting and some rehearsal took place before a true screenplay was written, and then a major rehearsal session took place again just before shooting, with the screenplay rewritten and reworked based on what we learned from that.”

Parsons used two cameras to be sure capture the performances. It is in the scenes involving Veronica and Søren that Parsons’s improvisatory techniques become most obvious. When they initially meet and Veronica tells Søren the news about his friend, he moves away from her, repeatedly tells her to “go away,” and eventually screams at her. He slumps to the floor and Veronica comes to sit down next to him. Søren begins to cry, begging her to get away from him. The camera holds close on Veronica’s worried face. Her eyes flicker screen left and then she turns her head screen right toward Søren.

She asks him how to get to the Viking Ship Museum, which is a joke that Pelle had told her about him. Veronica then tells him how sorry she is. He moves his body toward her and puts his arms around her. The camera, which is positioned from a side angle, holds on his Søren’s face. His eyes are wet with tears and his lips appear excessively red, making him look like a sad clown. Veronica tells him she has no idea what to do. Still in tears, Søren tells her to stay in the apartment. When he bolts from the apartment, she chases after him.

Veronica finds Søren drunk and setting off fireworks in the street. After she physically attacks him, he gets her to choose a firework. Later at a café, when he finds out that Lisa called Pelle “Milhouse” and he called her “Lisa,” Søren tells her, “I can call you Lisa,” indicating that he is taking the place of Pelle. The camera holds close on Veronica’s face and then pans over to Søren. He begins to fantasize about her and Pelle having children:

SØREN: I don’t mean right now. But if you wanted to have children, it would have been beautiful.

LISA: No, like seriously. All we did was have a lot of sex.

SØREN: You made love?

SØREN: But can I just say that you are beautiful and Pelle is beautiful. And I just think that you would have had beautiful children.

For Parsons, the screenplay becomes an important element in his improvisatory work with the actors. The director cites the influence of work of the musician Brian Eno in terms of his approach: “As we improvise, the screenplay provides a structure of incident and rising action, or themes upon which to perform variations.” I’ll Come Running—the title is a reference to an Eno song—is notable for its outstanding performances, especially the natural reactions that he was able to elicit from his actors, including the young boy. Pelle’s mother is extremely emotional, but his father (Mads Nørby) conveys his feelings almost completely through a series of piercing facial gestures.

But, ultimately, it is the scenes between Søren and Veronica that create intense unease and dramatic tension because Christian Tafdrup and Melonie Diaz manage to create a sense of unpredictability in their responses to each other, especially in their emotional flip flops or their abrupt sudden tonal shifts in their scenes together, which become psychologically unnerving to the viewer. It has to do how they play off each other as performers, as is evident in the scenes of their first meeting in Pelle’s apartment or in Søren’s fantasies about Veronica and Pelle having beautiful children. Their raw interactions are reminiscent of scenes and moments in the films of Cassavetes, making a strong case for the benefits of the spacious screenplay.

I’ll Come Running is an overlooked American indie film that deserves to be more widely seen. Luckily, it is now available for streaming on a number of platforms, including: Hulu, iTunes, Google Play, and YouTube.