The Dish & the Spoon

The Dish & the Spoon 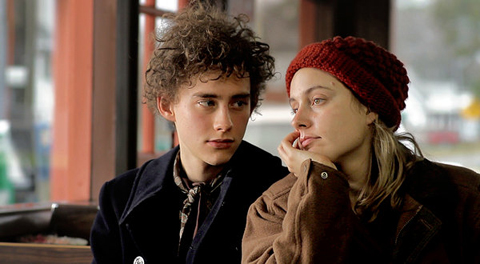 Bagnall and Gerwig had written a script together in which the female actor was to play the lead role, but it fell through at the last moment due to issues of financing. With Gerwig’s career about to take off following her breakthrough performance in Noah Baumbach’s Greenberg (2010), Bagnall came up with a new story. She and co-writer Andrew Lewis wrote a script for Gerwig and the young British actor, Olly Alexander, whom the director had discovered in an audition for the larger budget film.

Bagnall explains: “So in this story that fell out of the night, I imagined a woman, freaking out from a marital crisis, and this British boy who is as much an apparition as he is real. And how he becomes a sort of guardian angel and witness to her insanity and he helps her just by being there, but he also gets drawn in by her.” The actors were given a great deal of latitude with their characters, altering the script in discussions before shooting and adapting scenes to the site-specific locations of an off-season beach town in Delaware. It’s hardly surprising that much of the pleasure of The Dish & the Spoon derives from the inspired performances of Gerwig and Alexander, who have script credits for providing additional material.

The film begins with an extended shot driving through a tunnel. Framed from behind, Rose (Gerwig), who’s wearing a red woolen hat and a baggy winter coat over her pajamas, sobs to a ringing cell phone, which she angrily chucks out the window of her station wagon. At a general store, she uses her remaining change and crumpled bills to buy doughnuts and beer. As she plops herself down and gulps a beer inside a stone observation tower on the coast, she discovers a teenager curled up and shivering on an upstairs landing. She initially tries to take the boy to a hospital, but he refuses to go and suggests she’s drunk. The scrawny young man has a British accent, a tailored pea coat, tight-fitting high waters, and long disheveled hair that makes him look like a young Bob Dylan.

At a restaurant, the lad pretends to be Ishmael and begins reciting the opening passage of Herman Melville’s Moby Dick, while Rose, who misses the allusion, averts her eyes, looks away, and makes a face. She finally interrupts and asks, “Do you have any place I can take you?” He responds coyly, “Where do you live?” Rose shakes her head from side to side. “Nope, nope,” she tells him emphatically, “I need to take you somewhere.” He tells her he’s a rent boy, a term he has to explain. When she doesn’t believe him, he asks, “What? Am I not attractive enough to be a male prostitute?”

After admitting he’s only kidding, the teen tells a series of tales about himself, including that he’s been abandoned by a girlfriend after waiting six hours for her “like a spoon,” so that it’s impossible to determine what’s fantasy from what’s real. He adds telling details, such as that his girlfriend wasn’t as pretty as he remembered. When Rose interrupts him again, he tells her, “You’re much prettier than she is . . . was.” As Rose becomes even more frustrated and he flirts, the teen takes a sip of his hot chocolate, so that he has a milk mustache from the whipped cream.

The Dish & the Spoon involves the continually shifting dynamic between the unlikely pair. Rose has just discovered that her husband cheated on her with a yoga instructor named Emma (Hendricks). She vents her anger by leaving threatening phone messages on answering machines and showing up at Emma’s house wanting to kill her, which unnerves her teen companion.

Rose and the boy hang out together and get drunk on a brewery tour. He continues to tell stories about himself. At Rose’s summer cottage, when he talks about being the only boy at school who hadn’t  reached puberty at sixteen, Rose laughs uproariously and guesses that part is true, causing the nameless teenager to end the game abruptly. Whoever he is, the teen wears fashionable clothes and has money in his wallet, which the penniless Rose needs. Although the two appear to bond, she’s not beyond stealing from him or sticking him with the bill.

Rose’s anger at men turns decidedly mean. At one point, she dresses the cute teen in women’s clothes, lipstick, and nail polish and the two of them reverse gender roles. As he sits on a bench in drag, she strolls by, dressed like a man and wearing a tie, and picks him up. It’s at this point that the element of fantasy, games, and role playing veers into psychodrama when she abuses the young man by kissing him roughly and demeaning him. Although Rose later apologizes, her behavior feels downright cruel and a bit too real, as she plays a psychological mind game.

Still dressed as a man, Rose calls Emma on the phone. When she reaches her answering machine, Rose now takes on the role of her adulterer husband. She tells Emma, “My wife, she’s crying all the time, but I don’t want you to think it’s your fault, baby. It’s not your fault. My wife is crazy, crazy before this ever happened . . . She was always flying off the handle and, you know, she got so fat . . . it was disgusting.” Rose continues sarcastically, “You didn’t cause it. You’re beautiful and perfect. You teach yoga. You’re hot.” She ends on an ominous note, “By the time you get this message, I hope my wife is dead.” Rose is clearly becoming unhinged, and shortly after this, she contemplates suicide, but the beach entrance is closed.

Rose rebounds afterward. She tells the teenager: “I have a plan. The plan is it’s just you and me.” As they hold hands, he takes her to a dance hall, where he plays the piano, while she tap dances. When Rose later asks him why he never smiles, he reveals that he’s ashamed of his teeth, which he then bares to the camera at some length, creating another naked moment. The two eventually kiss more tenderly and, like young kids, fantasize getting married and having ten children. They even go to a costume shop and dress in period costumes – he looks like a dandy – and have a mock wedding picture taken, but it’s all a whimsical game.

Gerwig and Alexander are mesmerizing to watch, especially when it feels as if, in terms of their performances, they are at times walking a very thin tightrope without a safety net. The circus metaphor is somehow apt. The two provide a stark contrast. In her baggy clothes and exaggerated outbursts either on the phone or outside Emma’s house, Rose seems to be channeling Gena Rowlands and rants like a petulant clown, while the nameless teen wears extremely large and narrow shoes that make him walk like a hobo.

Bagnall, who co-wrote Vincent Gallo’s Buffalo ’66 (1998), is not afraid to deal with intense emotions. Although Rose has been cheated on, her reaction seems so extreme that it becomes comedic. And the smitten teen is so unabashedly romantic that he also sets himself up to be a doormat once he falls for Rose and follows her around like a devoted puppy dog. In fact, as his opening monologue indicates, he’s very much a refugee from a bygone era. His flights of fantasy, while endearing, are at odds with his own situation, a melancholy young British kid alone and adrift in a nearly deserted American resort town before the Christmas holidays.

Shot by Mark Schwartzbard, who uses light to imbue the setting with a sense of magic, The Dish & the Spoon feels influenced by vaudeville as much as other indie films – from the work of Cassavetes to Harmony Korine’s Gummo (1997) and Bujalski’s Mutual Appreciation (2006). Yet, at heart, the film remains an intriguing character study. Bagnall, who had watched the two main actors do an improv together, remarks: “I liked the way they looked next to each other, and during the improv Olly revealed this provocative insolence, which triggered a prickly, somewhat merciless response in Greta that was really compelling to watch.”

In The Dish & the Spoon, which has been released on DVD, we sense that the psychological complexity of the main characters stems precisely from the way the two actors are constantly testing the limits of each other’s personal boundaries. They are playing a game of “chicken,” in which neither one flinches.