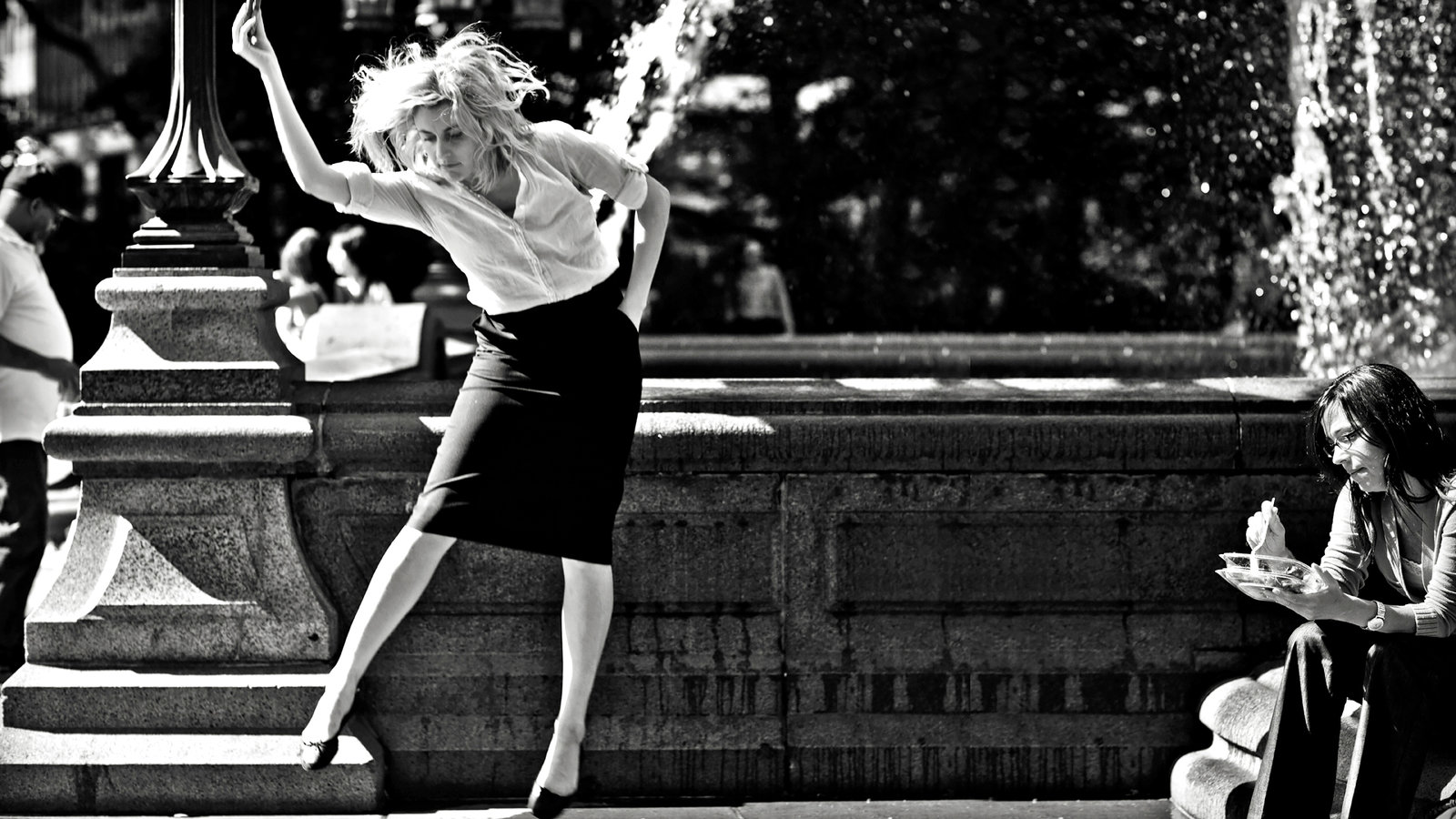 In Noah Baumbach’s Frances Ha (2013), Greta Gerwig presents a version of a character she has played before. In Joe Swanberg’s Hannah Takes the Stairs (2007), she was an inadvertent heartbreaker, in Baumbach’s previous film, Greenberg (2010), she fell for a lunatic, while in Alison Bagnall’s The Dish & the Spoon (2012), she wound up bitter and angry after being cheated on by her husband. If there’s a consistent thread in these films, it is that, either in the role of victimizer or victim, Gerwig’s character is a self-effacing, clown-like figure. Frances Halliday is no different. She’s twenty-seven and struggling to find her place in the world. Shot in black and white and full of allusions to the French New Wave (including the soundtrack), Frances Ha is a portrait of the type of befuddled character (emblematic of her generation) that has raised Gerwig to star status, as evidenced by her Golden Globe nomination for the film.

Frances doesn’t have much money. She is stuck as an apprentice at a professional dance company, teaches classes to kids, and desperately hopes to land a part in the Christmas show, while barely able to make ends meet. At the film’s beginning, Frances refuses to move in with her boyfriend, Dan (Michael Esper), largely because she and her roommate and best friend since college, Sophie (Mickey Sumner), have plans to renew their lease. This leads to a surprise breakup with Dan. After Sophie dumps Frances for better digs in Tribeca, Frances loses her bearings. When she meets a guy named Lev (Adam Driver) through Sophie, he texts her: “Ahoy, sexy!” Frances will adopt it as her standard greeting for the rest of the film. Frances invites Lev to go out for dinner when she gets a tax rebate, but her credit card gets turned down at the restaurant, which causes her to lumber frantically through the streets to find an ATM, during which she falls and injures herself (she may aspire to be a dancer, but she’s actually a klutz).

Nothing romantic comes of her date with Lev, especially after she flinches and makes a noise like a squeak toy when he touches her. She does, however, move in with him and his roommate, Benji (Michael Zegen), when the woman renting the small bedroom moves out unexpectedly. Once Frances becomes their roommate, the two guys act like brothers by jumping on her bed in the morning to wake her up. Lev turns out to be a Lothario, while Frances becomes “undateable,” even though Benji, who affectionately dubs her that, would clearly like to sleep with her. Frances dismisses his come-ons due to their discrepancy in height – he’s not too short, but rather she’s too tall. In this movie, however, it’s her friendship with Sophie that turns out to be much more important than any guy (she’s surprisingly career-oriented).

Frances Ha has very little plot. Like many indie films today, it is highly episodic. The film is structured around the different places that Frances lives (introduced by title cards bearing the street address): first with Sophie on Vanderbilt Avenue in Brooklyn, then in Chinatown with Lev and Benji, in Sacramento when she visits her parents (played by her real parents) at Christmas, on the Vassar campus in Poughkeepsie when she returns to her alma mater, and finally a place of her own in Washington Heights. In a sense, the film seems to be suggesting that young people in New York City these days are defined by their apartments. In a tight market, real estate often trumps relationships. It’s where you live, not whom you live with that seems to matter more. Frances even suggests at one point that Sophie should date Lev, so that she could also live there.

Frances and Sophie are like an old married couple rather than roommates. In fact, Frances acknowledges that they are like a lesbian couple who no longer have sex. They share child-like dreams of a happy future and have plans for taking over the world that include career success in publishing and modern dance, co-owning an apartment in Paris, having no children, and speaking at college graduations and receiving many honorary degrees. Although both women are straight, Frances is clearly jealous that Sophie has a boyfriend, Patch (Patrick Heusinger), a Wall Street guy whom Frances pokes fun at for always announcing, “I gotta take a leak” and Sophie criticizes for wearing distressed baseball hats. She adds, “He’s a nice guy, you know, for today.” Although Frances initially takes Sophie’s relationship with him in stride, after Sophie tells Frances that she loves Patch and they’re headed for the Galapagos the next morning, Frances creates a scene in a bar, causing a major rift in their relationship.

When she doesn’t get included in the Christmas show, Frances can no longer afford to pay rent and puts her belongings in storage. She visits her parents in Sacramento, and then stays temporarily with a dancer friend named Rachel (Grace Gummer), who makes it clear that crashing at her place is merely temporary. Frances completely embarrasses herself at a family dinner with Rachel’s wealthy relatives (she earlier blurted out that the only people who can afford to be artists in NYC are rich), but she also finds out that Patch has a new job in Japan and that he and Sophie are moving there. The news so upsets Frances that she impulsively decides to fly to Paris for two days. When she runs into Benji and his new girlfriend, Caroline (Maya Kazan) on the street, Frances admits that she’s paying for the trip with a new credit card. Caroline tells her, “That’s not smart. That’s what they want. They want to keep you in debt.” Frances responds, “I know that. I see documentaries.” The Paris trip turns out to be another bad decision. Yet Frances somehow remains a buoyant free spirit despite all the obstacles thrown in her path and somehow manages to triumph in the end.

In interviews, Gerwig has gone out of her way to distance her acting from improvisation. In denying that there is any improvised acting in the movie, she told the Los Angeles Times: “There were no unplanned moments, actually. I think the process of writing it was taking down spontaneous moments in conversation, shaping them and making them come to life in a way that feels spontaneous.” Since Gerwig has been associated with improvisation through her earlier films with Joe Swanberg, I can understand why she would emphasize that Frances Ha was scripted – after all she shares writing credit on the film with Baumbach. Yet whether you’re working from a script or a brief outline, there’s always some type of pre-planning involved. It strikes me that this has more to do with a particular style of acting. In Spring Breakers (2013), James Franco’s performance is built on stylistic excess, whereas Gerwig is still mining a version of naturalism.

Andy Warhol wrote in POPism: “The great stars are the ones who are doing something you can watch every second, even if it’s just a movement inside their eye.” Warhol was talking about his superstar, Edie Sedgwick, but the same might easily be said about Greta Gerwig. What makes her riveting as an actress is the uncanny way she processes material. In the early scene with her boyfriend, Dan, Frances initially reacts with surprise and excitement at his invitation to move in together, but she follows this with several conflicting responses and gestures, so by the end of the scene, the two break up. Most performances depend on a degree of predictability, which helps to define the character, whereas Gerwig never gives the expected gestural reaction. In fact, she might give multiple ones. She forces us to watch very carefully. Gerwig’s particular magic as a performer is to react to a situation or a line of dialogue in a way that totally catches us by surprise.

Although the success of Frances Ha is heavily dependent on Gerwig’s radiant performance, she is surrounded by a terrific supporting cast of gifted young actors, most notably Mickey Sumner as Sophie. We have all experienced losing our friends to lovers, going back to middle school. In Frances’s relationship with Sophie, the film explores the complex tension that often develops between friendship and romance.  Frances Ha exudes a youthful spirit that brims with energy, so that, by the end, Baumbach’s film goes beyond being merely a portrait – it feels more like a valentine.