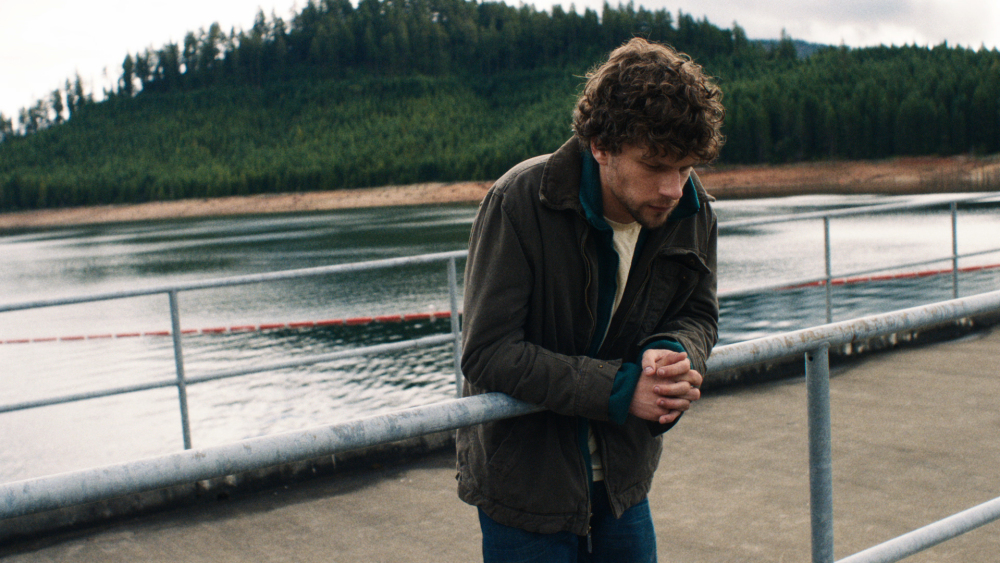 After a slow start to her career, Kelly Reichardt has gradually emerged as one of the very best American filmmakers. Her trajectory has been a consistent upward slope since Old Joy (2006) brought her back into the limelight twelve years after her debut feature River of Grass (1994). None of her films has been a huge box office success, but each of her subsequent films – Old Joy, Wendy and Lucy (2008), Meek’s Cutoff (2010) and her latest Night Moves (2013) – have become major critical successes, playing at the top film festivals throughout the world. Night Moves, co-written with Jon Raymond, premiered at Venice and screened at Toronto and Tribeca, as well as Deauville, where it won the Grand Prize.

In Night Moves, Reichardt uses the suspense thriller genre – a plot by environmental radicals to blow up a hydroelectric dam – to create a chilling character study of its idealistic but disturbed protagonist, a young man named Josh (Jesse Eisenberg) who works at an organic farm. Josh has two cohorts: a wealthy younger female college dropout, Dena (Dakota Fanning), and an older and somewhat unhinged ex-marine, Harmon (Peter Sarsgaard). Together the three of them seem like an unlikely combination. What would motivate this trio of misfits to resort to terrorism amidst the bucolic landscape of southern Oregon? That question lies at the heart of Reichardt’s intriguing new feature.

Night Moves has a different pace than conventional Hollywood thrillers and eschews special effects (the explosion occurs as a thunder-like sound off-screen), yet it remains eerily riveting nonetheless. The film begins with a shot of water spewing from a large rusty valve on the spillway of the dam, as a pensive Josh scopes out their potential target. With his hunched shoulders and inset eyes that stare vacantly ahead or flicker nervously, Jesse’s rigid body language suggests a defensive posture. If he and Dena are a couple, they appear to be an estranged one. They barely speak to each other, and when they do, there’s a hint of sarcasm in their banter. When Dena questions how far it is to Harmon’s place, Josh mocks the small size of her home state of Connecticut. There’s little emotional warmth between the two, yet we sense that Josh clings to some kind of bond with her.

At the New Age spa where Dena works, Josh stares at the naked body of a blond-haired woman as she descends into the pool of water, but his reaction is less a lecherous gaze than a penetrating stare. As Josh and Dena drive through the night after buying a boat, they come across a dead doe lying on the road. After examining it, Josh concludes that the animal is pregnant, but he makes no effort to save the unborn baby. With clinical detachment, he merely drags the dead carcass and rolls it over the embankment while Dena silently looks on. The two eventually deliver the boat (the film’s title derives from its name) to Harmon, who questions why Josh has allowed Dena to become involved in such a high-level operation. It turns out she’s bankrolling the endeavor, to which Harmon responds, “A rich daddy.”

Harmon wants to send her home, but Josh remains adamant about her involvement. To him, it’s a deal breaker, though we’re not sure why. As is their habit, Reichardt and Raymond bury the motivations of their characters, forcing us to scrutinize every word, gesture, and action for clues into their behavior. Later, after the three of them bag fertilizer and conclude the physical preparations to blow up the dam, Josh returns with pizzas only to hear the moans of Dena making it with Harmon inside his trailer. Josh walks off into the woods and ends up staring at the dirty palms of his hands, which turns out to be a telling detail. When he eventually talks with Harmon, Josh displays no reaction to what has transpired, nor does he ever confront Dena.

While the true motivations of these characters might not be apparent, their shared political beliefs about various threats to the environment are what push them to take extreme action. Josh can’t stomach the activist filmmaker from Eugene or the rich guy who sells them the boat. He’s planning a big wake-up call, remarking bitterly, “Killing all the salmon just so you could run your fucking iPod every second of your life.” Harmon has it in for golf courses: “It’s the high plains desert. Where’s the water?” When he discusses fishing with Dena, she expresses moral indignation over the fact that the fish are rapidly disappearing from the planet. Reichardt, who has an outsider sensibility, is clearly sympathetic, as evidenced by the wide shot of mounds of garbage at the local landfill. She also shoots the scene of the arrival of the terrorists at the reservoir from inside a camper in which a couple sits and watches a game show on TV.

Yet how can individuals combat a world that is so hell-bent on profit and the destruction of our precious natural resources? The film ponders that question. After Josh and his pals finally take radical action, one of the young workers at the organic farm, Dylan (Logan Miller) expresses solidarity, but the older farmer, Sean (Kai Lennox), has a different reaction. He calls the perpetrators “idiots” and tells Dylan, “I’m not interested in statements, I’m interested in results.” He mocks the destruction of the Green Peter Dam, one of ten on the Santiam River, as an ineffective piece of theater and clearly believes his own personal response, sustainable organic farming, to be a far more productive strategy.

No stranger to genre, Reichardt, aided by a haunting score by Jeff Grace, knows how to create suspense without pandering to audience expectations. Once we know the group’s plans and events are set in motion, the film kicks into high gear. The tension becomes palpable when Dena attempts to buy five hundred pounds of ammonium nitrate fertilizer at the feed store and removes her hat while a surveillance camera records her image. At the dam, Reichardt literally includes a ticking clock, ratcheting up the drama as the three set the timer and position the boat loaded with explosives. In the aftermath, the film’s second half, Night Moves becomes more deeply psychological than any previous Reichardt film, once the fallout from their actions becomes fully manifest.

Peter Sarsgaard and Dakota Fanning are both impressive, but Eisenberg gives a truly mesmerizing performance. In an interview about Wendy and Lucy, Jon Raymond suggested that Michelle Williams deserved a black belt in acting for expressing “the idea that she was, in fact, withholding expression.” The same might be said about Eisenberg. How is it possible for him to convey such a strong and engaging sense of a character unable to express emotion? Part of the pleasure of watching Night Moves is to observe the various ways that Eisenberg is able to bring life to his character: how he interrupts conversations, speaks in short clipped bursts separated by long pauses, and resorts to gestures and subtle shifts of his eyes rather than words. Reichardt commented in Indiewire, “You can just see his brain working through his face all the time, and that’s sort of what appealed to me.”

Reichardt and her cinematographer, Christopher Blauvelt, create striking contrasts between light and dark. Throughout the film, she embeds her characters within the natural landscape. Reichardt is much less concerned with exposition, plot, and dialogue than in rendering the story visually through images that convey precise details. We see how the dam has affected the surrounding topography through carefully composed shots of trees submerged in water or stumps of them sticking out of the muddy terrain at the water’s edge.

As with all Reichardt’s films, which have a strong regional bent, the characters in Night Moves are very much the product of place, in this case Oregon, which has spawned a certain kind of environmental activism that inspired the making of the film. Reichardt has suggested in Filmmaker that, although she likes that state, she now wants “to try to do something different.” If that’s true, Night Moves can be seen as the final installment in what might be considered her “Oregon Quartet.” As such, Night Moves, which stands as one of her very best films, represents a highly moving farewell.

Note: Night Moves will have its Madison premiere at the UW Cinematheque on September 5. It will be released on DVD and Blu-ray shortly afterward, but this is the kind of film that you want to see with an audience on a large screen.